When the members of the Human Rights Council (HRC) met for the first time in the evening of March 17st, everybody was extremely excited and highly motivated to get the conference started. The very professional and well organized Committee Directors gave few introductory words.

Afterwards the first session began in the usual way, with a role call. With just two or three states not being present, the HRC was almost completely represented. Then the committee had to set itself an agenda. Therefore finally a speaker’s list was opened in order to start the discussion. Everybody was eager to be put on the speaker’s list, which was filled after a few seconds.

It resulted finally that the HRC would be discussing firstly the Human Right to Water and secondly the Human Rights of Internally Displaced People. The Delegation of Angola looked favorably on this decision as the Human Right to Water is still a very fundamental issue in most of the sub-Sahara African states. From an Angolan perspective, a lot of questions needed to be discussed in this regard. For instance, the timeframe for the water-related goals was set to 2015 in the UN Millennium Declaration – but it is still uncertain in which way the post-2015 agenda will address the global water crisis. 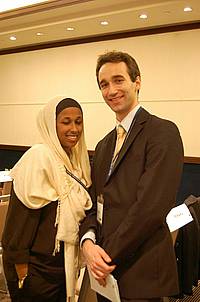 Charming everyone: Khulud and Thomas in the Human Rights Council

Directly after the order of the topics was set, the Committee Directors opened a new speaker’s list. Now it really mattered to get on the list as fast as possible – the first speakers could address their most important points and try to get others on their side, even before the work in the informal caucuses had started. Luckily, the delegates of Angola were among the first ten speakers. However, the speaker’s list was soon interrupted by a first informal caucus.

Then the speaker’s list was continued – finally it was Angola’s turn to speak. The speech tried to concentrate on the main goal the delegates had agreed upon for the conference: to establish a standing-alone goal for water in the UN post-2015 development agenda. When the speech was finished, the HRC decided to adjourn the meeting to tomorrow.

The three following days were dominated by lots of informal caucuses. Though the Angolan delegates had re-put themselves on the speaker’s list directly after their first speech had been delivered, it should take until conference day 4 that they could speak again. The members of the HRC were very productive notwithstanding. At the end of the second day five working papers were on the floor, so that the chair encouraged the members to merge some of their papers.

As Angola was actively engaged in two papers at this point, the delegates tried to follow the chair’s advice. After some negotiations the working papers were merged. In the same way other papers were combined, so that finally at conference day 3 just three working papers were left. Eventually all papers became draft resolutions. After some corrections and amendments of the chair the HRC finally moved into voting procedure – with the result that all draft resolutions were adopted. Following the spirit of the United Nations, the HRC had been trying to meet the needs of all members. The work on the first topic was done.

Since it was already afternoon of conference day 3, just some more hours were left to discuss the second topic. Unfortunately the HRC was not able to reach a consensus in this very short period of time, but as the meeting was adjourned to the next year, hopefully future delegates will be finishing the discussion.

Resolutions of the HRC.