The disability commissioner of the Bavarian State Government, Irmgard Badura, handed the "Bayern barrierefrei" label to the University of Würzburg. It was presented in the name of Bavarian State Minister for Labour and Social Affairs, Emilia Müller, in recognition of the university's efforts in the field of inclusion and accessibility. 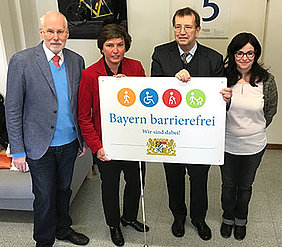 "The University of Würzburg takes the rights of people with disabilities and impairments seriously," Irmgard Badura said in the office of the University of Würzburg's Access Centre for Students with Disabilities and Chronic Diseases (KIS) on Thursday morning. The disability commissioner of the Bavarian Government added: "So it's with great pleasure that I present this sign in the name of Bavarian State Minister, Emilia Müller.

The University of Würzburg is the only Bavarian university to have received such recognition. The label is an instrument to achieve the goal of making Bavaria accessible by 2023 declared by Bavarian Minister President, Horst Seehofer (CSU), in a government policy statement. The Bavarian Government presented the label in appreciation of the university's efforts to create the best possible conditions for students and staff with impairments.

Forchel: Milestone on the way to comprehensive inclusion

"The label is also a mandate to keep up the efforts and continue to implement the concept of inclusion for the benefit of students and staff," Badura said. University president Alfred Forchel responded by saying: "We also consider the label less as an award and more as a milestone on our way to achieving permanent and comprehensive inclusion."

For one thing, this affects the creation of accessible buildings, but "in particular also the general removal of barriers which students with disabilities and chronic diseases are facing individually," Forchel further. He believes that providing advice and course-related support are essential to successful inclusion. The president said: "Surely, further efforts are needed to achieve this all-encompassing level of inclusion."

The KIS office led by Sandra Mölter provides guidance and advice on this subject at the University of Würzburg. Students can talk to competent contacts here. Moreover, assistants are available to accompany students during everyday university life and there is a pool of resources such as special notebooks or hearing aids that can be borrowed. "Most fields of study at the University of Würzburg are also open to students with greater impairments. We can usually create the circumstances that enable successful participation in a course," Mölter says.

Chancellor Uwe Klug is also proud of what has been achieved so far in terms of accessibility. Several university buildings have been converted in the past years. The university has installed ramps, elevators, guidance systems and labelling for blind and partially sighted students. "The team of KIS is involved in all planning steps from the beginning," Klug says and he adds: "Frequently, however, we are impeded by insufficient financial resources."

At all other levels, however, he considers accessibility and inclusion to have been implemented. This also becomes evident in seemingly less important everyday situations, for example in administration: Everyone from this area who needs to consult the university management gets an appointment quickly and without difficulty.

Professor Reinhard Lelgemann, commissioned by the university management to liaise with students that have disabilities and chronic diseases, drew attention to the fact that a good part of the work in the access centre concerns people whose impairment is not immediately visible and who do not benefit from constructional measures: "More than 90 percent of counselling interviews are with students who have mental health impairments," Lelgemann explains.

In his government policy statement from November 2013, the Bavarian Minister President, Horst Seehofer (CSU), set the goal of making the entire public sphere and the local public transport (ÖPNV) in Bavaria fully accessible until 2023. To achieve this goal, three fields of action were prioritised and adopted by the Council of Ministers in July 2014. They include mobility (ÖPNV and railway stations), education (childcare and schools) and government buildings that are publicly accessible. The "Bayern barrierefrei" label aims to publicise positive examples.