University has an observatory again

Pupils, teachers, students and scientists observe the cosmos together at the Hans Haffner Observatory in Hettstadt near Würzburg. The school and university observatory is set to be extended in spring 2016. 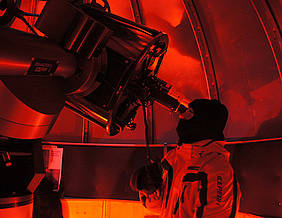 A pupil at work in the Hans Haffner Observatory – during a rather chilly night. (Photo: Naturwissenschaftliches Labor für Schüler am FKG e.V.)

Located about ten kilometres west of Würzburg, the Hettstadt observatory gives stargazers a glimpse of space. Built in 2009, the facility is named after the Würzburg astronomer Hans Haffner (1912-1977). Its construction was actively supported by the community of Hettstadt and the association "Naturwissenschaftliches Labor für Schüler am FKG e.V." at the Friedrich Koenig Gymnasium (FKG) secondary school in Würzburg.

The goal of the experimental and research laboratory is to promote pupils who are interested in natural science and technology. The Hans Haffner Observatory allows them to observe the skies and do their own astronomic measurements. FKG chairman Christian Lorey initiated the association. In November 2015, he received the renowned Klaus von Klitzing Award as "MINT Teacher of the Year".

During the observatory's construction phase, a close partnership developed with Professor Karl Mannheim from the Julius-Maximilians-Universität (JMU) Würzburg's Chair of Astronomy. A professional 50-centimetre reflector telescope provided by the Chair was used as the main instrument of the observatory. In addition to teaching staff and senior students, the pupils are supported by scientists and students of the university in joint research projects.

New status as a school and university observatory

A cooperation agreement was signed recently to cover the collaboration between the university and the association, making the Hettstadt facility an official school and university observatory.

The university finally has an operational observatory again, having abandoned its previous facility in the Keesburg district in the 1990s. And that was for a good reason: "Sensitive measurements for scientific purposes are impossible given the light pollution of the city of Würzburg," Professor Mannheim explains. The Hettstadt site in contrast is surprisingly well suited as past measurements have clearly demonstrated.

Presently, a radio telescope is being installed in the observatory, which will allow astronomical observation during the day. Operating in the radio frequency portion, it reveals astronomical objects and interstellar gas clouds invisible to conventional telescopes. Hence, the young scientists can learn the basics of radio measurement technology relevant for modern applications, for example in wireless communication or air-traffic control.

Zealous pupils and students of the Faculty of Physics and Astronomy will soon be able to use a receiver at the observatory to prove the hyperfine structure line of neutral hydrogen. This method allows measuring the rotation of the Milky Way.

Already, the university and the association are looking back on a successful collaboration. Pupils, teachers, students and scientists have been using the observatory since late 2009 not only for astronomical observations and internships. Within the scope of a joint research project set up a few years ago, they have been studying the brightness fluctuations of active galaxy cores.

The project aims to determine the masses and distances of black holes that circle each other in pairs in the centres of some galaxies. The measurements made in Hettstadt add to Professor Mannheim's research work: His team investigates the same objects based on gamma radiation, using the MAGIC telescope system on the Canary Island of La Palma.

The collaboration's latest success was a publication in the prestigious scientific journal "The Astrophysical Journal Letters" in December 2015. The pupils involved were mentioned as co-authors of the article. In 2013 already, the Robert Bosch Foundation had given the "Schule trifft Wissenschaft" award to the project.

Participants to the contract signing

The cooperation agreement between the university and the association was signed on 22 February 2016 by the university's vice president, Barbara Sponholz, and the chairman of the association, Christian Lorey. The event was attended by Professor Karl Mannheim and FKG's principal, Dr. Siegfried Rose, as well as Martin Feige, Jannik Kania, Professor Thomas Müller and Nils Zottmann from the association's board.

Homepage of the Hans Haffner Observatory 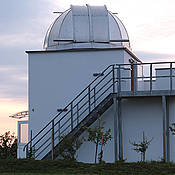 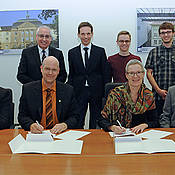