Studying for a better world

Some 2,600 foreign students are enrolled at the University of Würzburg. Law student Shama Busha Pongo from the Congo came to Germany four years ago and he knows exactly what he wants. 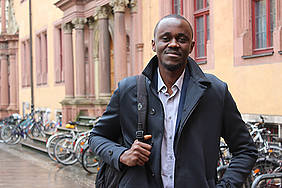 Making things better at home: This is probably an unusual aspiration for students coming to study at the Julius-Maximilians-Universität (JMU) Würzburg in Bavaria, Germany. Shama Busha Pongo is one of them. Born in the Democratic Republic of the Congo, he is studying European Law at the Faculty of Law. After completing his master's and PhD, he wants to return to the Congo to teach as a professor at his home university in Kinshasa.

Graduated already in the Congo

When Shama came to Würzburg in 2013, he spent the first two semesters studying German. The challenge of mastering legal language made for a difficult start into the master's programme. But in spite of this, he passed his first exam right away. "This gave me tremendous courage and motivation," the 30-year-old student remembers.

Shama already studied law at the University of Kinshasa and graduated after five years. Before that, he had been going to a secondary school with specialisation in Latin and philosophy. He learned about Würzburg while he was still at university in the Congo – in 2010 he accompanied a professor on a three-week trip to the JMU.

"Going to study in Germany was taking a step into the unknown for me. A decision I haven't regretted," the law student says. "I learned a lot during the adjustment process. I want to take some of the German mentality and determination back home to share it with the young generation."

The first two years of his studies in Würzburg were subsidized by a scholarship from the German-Congolese Lawyers Association. Since then, he has been sponsored by the Holger Pöhlmann Foundation and the Excellence Scholarship Program BEBUC.

Changed view of the world

Since living in Würzburg, Shama has been able to visit his family only once. In 2015, he flew to Kinshasa to spend two months with his parents and nine siblings. "Since I have been here, everything has changed for me," he explains. Above all, he sees his home country in a different light.

"I come from a developing country. It's the task of my generation to rebuild and modernize the Congo to make it fit for the 21st century," says the law student. "This is the reason why I am in Germany – I don't want to learn just about European law, but especially I want to get familiar with German law and see how I can use this knowledge in the Congo."

Women in the Congo

During his academic career, Shama has specialised in criminology and criminal law. He is especially worried by the increasing sexual violence against women in the Congo. "I grew up in a very loving family and was surrounded almost exclusively by women," he tells us. "It is totally beyond me how someone could do something like this to a woman."

As there are no forensic labs in the Congo, sexual offenders cannot be identified through DNA analysis. So the Congolese justice system does not have any evidence to take action against criminals, as Shama explains.

Working on a book about sexual abuse

This topic gets much too little attention in his home country. Therefore, the law student has made it his mission to improve the situation of the women in the Congo while drawing more attention to the problem. For this reason, he is writing a book besides his studies. The scientific text investigates the cultural and social changes that have triggered the rising sexual violence against women even in regions of the Congo not afflicted by war.

So he has a lot on his plate, which is why he regularly works night shifts in the library. "Unlike for German students, education means survival for us. Not many Congolese can afford to go to university in the Congo. So if we get the chance to study, we live for it," he explains.

His advice to other students, especially his co-students from the Congo and other developing countries: Never lose sight of your goal, use the opportunity that scholarships for a German university offer and put your heart into it. The future of our countries lies in our hands – we are the next generation of politicians, lawyers and judges who can change something."