Research that makes you laugh and think

A study conducted by scientists from the Netherlands and Belgium takes a closer look at liars and the lies they tell. Würzburg psychologist Kristina Suchotzki participated in the study. Now the team has been awarded the lg Nobel Prize, the humorous parody of its Swedish counterpart. 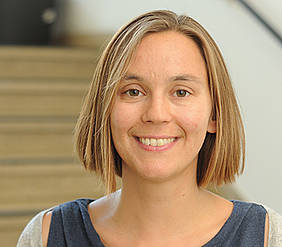 How does the ability to lie change over a lifespan? And how often do people lie each day? These were the central questions of a study published by a team of scientists around Evelyne Debey from the University of Gent in 2015. In August 2012, more than 1,000 volunteers aged between six and 77 had participated in a number of tests and completed questionnaires for this purpose. A co-author of the study, Dr. Kristina Suchotzki joined the Chair of Psychology I of the University of Würzburg in March 2015.

The study has now won the lg Nobel Prize 2016 in Psychology presented during a bizarre ceremony at Harvard University. Awarded for the 26th time this year, the lg Nobel Prize (derived from the word ignoble, meaning unworthy) goes to renowned researchers to honour scientific achievements that are both curious and professional. The prizes are "intended to celebrate the unusual, honour the imaginative" as the jury puts it. They reward research projects that "make people LAUGH and then THINK." This year's trophy – a plastic watch and ten billion (Zimbabwe) dollars – is often presented by genuine Nobel Laureates.

Evelyne Debey and her co-authors were honoured "for asking a thousand liars how often they lie, and for deciding whether to believe those answers." In fact the question how often people lie had not been the psychologists' primary concern. "That was not the core of our work," says Kristina Suchotzki. Rather, the scientists wanted to find out how the lying proficiency develops over a lifespan – how well people can lie, from young children to seniors.

Lying is not child's play

One thing was for sure: "The ubiquity of lies in everyday life does not imply that lying is child's play," the authors write in their study. Research has shown that lying considerably challenges cognitive capacities. This is because the truth response is activated first in the brain, thereby inducing a response conflict. People who want to lie therefore have to inhibit the truth from slipping out, a task that requires energy. "Young children in particular are frequently not yet capable of this inhibition process," says Kristina Suchotzki. Also, the truth has to be kept active in the working memory to help formulate an alternative, deceptive response.

The ability to lie hence needs to develop. In old age this ability seems to decrease, possibly due to degrading cognitive performance. The scientists had expected this outcome and saw it confirmed after analysing their data. They found that three central criteria improved during childhood, peaked in young adulthood and worsened throughout adulthood: cognitive control, lying proficiency and lying frequency on a daily basis.

Two lies a day – but not by everyone

Another finding of the study had been that people lie twice a day. This at least is the average calculated from the almost 1,000 responses to the question: "How often have you lied in the past 24 hours?" Actually, there were great individual differences with regard to the readiness to lie. Around half of the participants stated that they had not told a lie in the past 24 hours. Among the other half, about nine percent of participants accounted for more than 50% of all lies – with peak values of up to 16 lies a day. This "non-normal distribution" as the study puts it was found across all age groups – honestly!

Dr. Suchotzki: What was your first thought when you learned that you would receive the lg Nobel Prize? At first I wasn't sure whether this was a compliment or not. I hadn't heard of the prize and had to google it. When I read that the prize honours achievements that make people laugh and then think, I thought that was great. We received a lot of positive feedback and I was happy that our work thus got greater coverage than would have been possible by publishing it in a scientific journal. And after all, who would not like to include a Nobel Prize in one's CV?

How did your colleagues react? Many were pleased and thought it was cool – especially those who already knew the prize and the extremely funny and entertaining awarding ceremony.

Asking liars how often they lie: Obviously, the jury found this an improbable question to ask. That sounds strange, of course. But I have to say that the questionnaire, which we did not develop by the way, has provided some very interesting insights. For example, we found great differences in how often people lie. Of course, you can never be 100% sure that what people state in questionnaires is actually true. But that is exactly why this questionnaire is usually only one element of a study, as in our case, and is complemented by other experimental methods.

What fascinates you about lying? Lying is a highly complex behaviour which every one of us has been confronted with at some point in their lives. And when lying goes undetected, it can have severe consequences under certain circumstances. On the other hand, lying facilitates social interaction, for example white lies that someone tells to avoid hurting another person. It's this complexity that I find most exciting, as it opens up a number of interesting research approaches. For example, take the skills necessary to lie successfully: You have to remember the true answer and be able to suppress it. You need to have an idea of what the other person is thinking while trying to appear all relaxed and honest.

Does this mean that you will continue researching this subject? Yes, absolutely. I already studied this subject as a PhD student in Belgium and I am excited to be able to continue this line of work here in Würzburg as postdoc. I would also appreciate a more intensive exchange between science and practical application. Especially in the context of lie detection, this exchange of knowledge deserves some improvement.

Thank you for the interview.