A great success for Würzburg's physics department: its Collaborative Research Centre was rated as excellent and is now entering its second funding phase. The German Research Foundation is providing 12 million euros for this purpose. 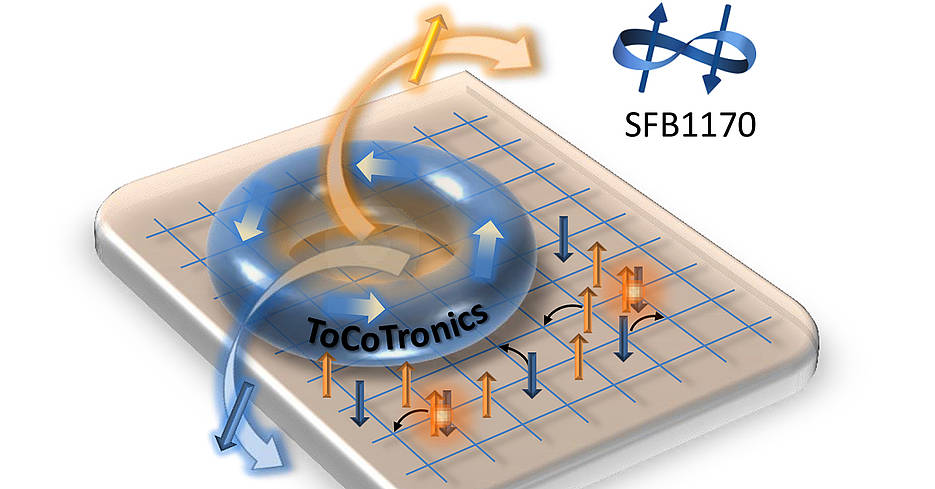 The graphic illustrates the interplay between topology (blue ring) and strong correlation (electron spins; coloured arrows on the square grid). This is what the Würzburg Collaborative Research Centre ToCoTronics is all about. (Image: Jörg Schäfer / Universität Würzburg)

In 2015, physicists at Julius-Maximilians-Universität (JMU) Würzburg in Bavaria, Germany, succeeded in establishing a new Collaborative Research Centre in Würzburg. The German Research Foundation (DFG) provided around 11 million euros for this purpose. The money went into research into topological materials – this class of materials is characterised by very unusual properties. It is being studied intensively worldwide because it promises novel applications in information technology and other fields.

Now the Collaborative Research Centre (in short SFB for “Sonderforschungsbereich”) was to be evaluated according to plan. This process was very successful for the university: The DFG continues to rate the work carried out and the new research plans as excellent. It is funding the SFB "Topological and Correlated Electronics in Surfaces and Interfaces (ToCoTronics)" for another four years with a total of 12 million euros.

Results are published in renowned journals

Professor Björn Trauzettel, one of the two SFB spokespersons and holder of the JMU Chair of Theoretical Physics IV, is very pleased with this success: "In the SFB we have decisively advanced research on topological materials. We have discovered new topological insulators and optimized hybrid systems made of topological materials and superconductors".

The achievements of the entire SFB research team are reflected in the large number of more than 200 joint publications in renowned scientific journals. More than 50 of those publications have appeared in high-impact journals such as Nature, Science, Nature Physics, Nature Materials, and Physical Review Letters.

The research programme until 2023

The DFG funding will be used to finance almost 40 new positions at the SFB over the next four years. The new research programme revolves around a central question: How do electronic correlations influence the topological physics of solids and vice versa? "Once we understand the underlying mechanisms, we can design nanosystems with functional properties and use them for innovative applications in spintronics or quantum information technology," says Trauzettel.

First intermediate goals are the optimization of the material quality of known topological insulators, the generation of novel topological interface phases by combining them with superconductors and ferromagnets, and functionalization for new applications.

Professor Ralph Claessen, the other SFB spokesperson and holder of the JMU Chair of Experimental Physics IV, describes another central focus: "It will be on the interaction of spin orbital coupling with Coulomb interaction, which is still poorly understood but has extensive potential for the discovery of new topological materials and phenomena.”

The second phase of the SFB ToCoTronics runs simultaneously with the first funding period of the Cluster of Excellence ct.qmat, in which the University of Würzburg and the TU Dresden jointly do research on topological physics in different systems. ToCoTronics is an important pillar of the Cluster of Excellence. It is to be expected that the synergies of both projects will give JMU solid state research a boost that will strengthen the university's position as one of the world's leading research locations.

For lay persons: Information about the research topic in ToCoTronics can be found in the press release distributed by JMU in May 2015 at the start of the SFB.