The discovery and development of new materials, the research of basic physic of topological and correlated electronic systems in solid bodies and the training of young scientists: These are the main targets of a new Collaborative Research Centre at the University of Würzburg. 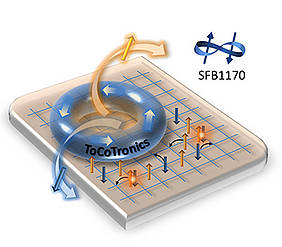 Topological and Correlated Electronics at Surfaces and Interfaces or short ToCoTronics: This is the name of the Collaborative Research Centre (SFB) at the University of Würzburg that was authorized by the German Research Foundation (DFG) on 21 May. 24 scientists from four institutions of the university are participating:

What is it about?

Many advanced technologies, such as, for example computers, mobile phones, solar cells or electric mobility are based on the physical behaviour of electrons. It is mainly two properties of these elementary particles that are important: its electric charge and its spin. The charge becomes noticeable when electrons move, i.e. when electric current flows. Modern computer chips use this property by specifically controlling small electric currents, similar to the way traffic lights or traffic police control the traffic. The spin in turn, is the name for the property of the electrons to align themselves in a magnetic field just like small compass needles. This, for example, is the basis of the function of magnetic hard disks in data storage.

The physical rules according to which charge and spin can be manipulated in the modules of today’s computer technology are well known and mastered. However, to achieve higher performance, increasingly smaller modules are required. Continuing miniaturisation though, pushes established rules increasingly to its limits and they are replaced by quantum physical laws. Thus, for example, the mutual repulsion of the negatively charged electrons is increased; this leads to electronic correlations and the development of complex phases which actually cannot exist in interactive systems. Ferromagnetism is a prime example that we encounter frequently, even in everyday life.

Another phenomenon that hardly plays a role in conventional electronics is the mutual influencing of spin and moving charge - an effect that is the result of Einstein’s theory of relativity and which leads to new behaviour that is described with the term topological physics. The origin of the name is due to the fact that topological materials can be classified by the mathematical concept of topology. On the inside of such materials they behave just like ordinary solid bodies, for example, like insulators, but on their surface something surprising happens: A topological insulator suddenly becomes a good electrical conductor.

What are the scientific questions?

Since such effects were first predicted theoretically in 2005, Professor Laurens Molenkamp from the Physical Institute of the University of Würzburg managed the first experimental proof worldwide of a topological insulator in 2007. This initiated one of the most active international research area of modern solid physics. This discovery is based on an exceptional semi-conductor material that is made up of the chemical elements mercury, cadmium and tellurium and that can only be made in the required quality in a few laboratories worldwide. Among the scientific objectives of the "ToCoTronics" Collaborative Research Centre is the physical examination of this special material and its topological properties and also the targeted search for topological physics in other material classes or material combinations. The Würzburg scientists are here particularly interested in the link between topological physics with electronic correlation effects, from which totally new phenomenon may be expected, such as topological superconductivity or unusual forms of magnetism.

What are possible applications?

The mentioned phenomena – electronic correlations and topological physic and particularly their interaction – have so far been little understood. However, they have a very large application potential for new and advanced technologies. For example, on the boundary surfaces of topological materials, the direction of propagation of the charge carriers and the spin are strongly coupled to each other. These surface conditions in the so called spintronic hold promises for applications. This is where electronic switching processes are to be replaced by magnetic switching processes (with the help of the spin). This would result in logic modules requiring less energy, which is one of the main problems of today’s technologies. Moreover, the properties of topological materials may also be used for the realization of so called quantum computers, which are based on a totally new concept of data processing. The scientists participating within the SFB 1170 would like to develop the physical and technological basics for such applications on middle to long-term time scales.

What does the SFB mean for the University of Würzburg?

A scientific challenge of this size requires the interdisciplinary cooperation of many experts from very different areas of experimental and theoretical solid state physics - and most of all patience. The concept of the Collaborative Research Centre with its funding by the German Research Foundation (DFG) that has been designed for a period of over twelve years is therefore virtually made for such an extensive approach to research.

Targeted new appointments of the last years in Würzburg’s solid physics department have satisfied the requirements for the new Collaborative Research Centre; experimental physics and theorists are already working hand in hand. These collaborations are significantly strengthened and structured in targeted way by the new SFB. The integration of technical infrastructural facilities of RCCM and GLLN play and important role here. Last but not least, the promotion of scientific young talents is a central concern of the SFB; after all, an essential part of the research program is carried by the doctoral students involved. 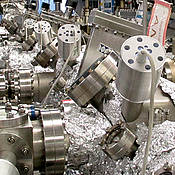