More than a game: Games Engineering as degree subject

Starting with winter semester 2016, the University of Würzburg will offer the Bachelor’s program “Games Engineering” for the first time. It provides the scientific and technical knowledge required for the development of computer games that fulfil current and future standards. 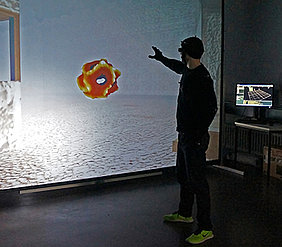 Virtual reality is one topic of many.

Games are becoming ever more popular and are used in new application areas. While traditional console and computer games continue to play a role, the numbers of online games and playful approaches in other areas keep increasing.

At the same time, smartphones and tablets gain in importance as supplemental distribution channels. “The computer games industry has developed into a growth sector with a high demand for well-trained experts”, says Professor Marc Erich Latoschik. He is the head of the department Computer Science IX (Human-Computer-Interaction) and has designed the new offer.

At the beginning of the studies held in German, the focus is on basic subjects: Computer science and mathematics. Then, the students can specialize quickly: Game Design and Games Engineering are the respective modules.

“The special features of our program are current focus topics like Immersive Games or highly interactive, multi-modular systems in Social, Serious or Mixed Reality Gaming”, says Latoschik. In these areas, the borders between reality and virtual reality become blurred to provide the user with opportunities that would not be possible in the individual realities.

Further plus factors of the Würzburg program: tight integration of theory and practice as well as networking with strong industry partners, for example with companies like Ubisoft and Bluebyte. Professor Latoschik and his staff attach great importance to the practical implementation of what the students have learnt. This is why there is a “Game Lab” for the students every year. The task is to develop their own games as early as in the first semesters.

Bachelor thesis and a work placement are on the agenda in the third year. Another part of the curriculum is the acquisition of key qualifications. After six semesters, the students have earned the title “Bachelor of Science Games Engineering”.

Applications are expected to be possible until July 15. The admission quota is limited, the school leaving examination grade is decisive.

The new program was created in the context of the Bavarian high-tech initiative “Bayern Digital”. The free state of Bavaria aims to support and shape digitalization with this initiative. Special emphasis is put on innovative projects.

All further details on the program and links for enrolment and admission can be found here: http://games.uni-wuerzburg.de/, the Academic Advising Center also provides information for the new offer: https://www.uni-wuerzburg.de/studium/angebot/faecher/games_engineering/ (mostly in german language). 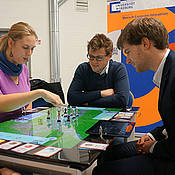