Leap Forward in the Fight Against Antibiotic Resistance

Würzburg researchers succeed in deep sequencing RNA of single bacteria. Their study is published in the journal Nature Microbiology. 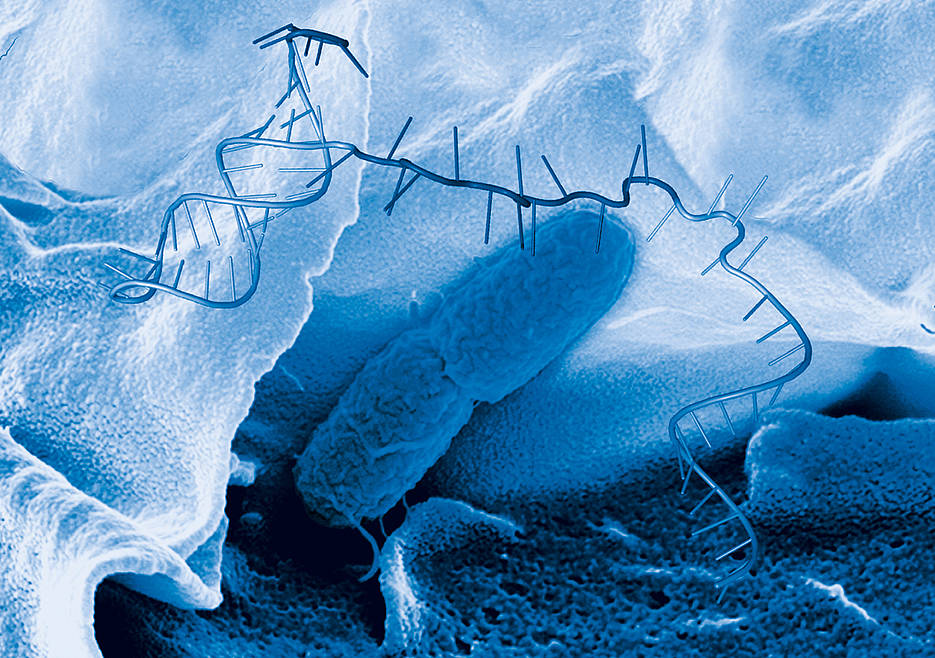 Bacteria show a wide range of capabilities in withstanding antibiotic treatment or attack by our immune system, which are great challenges in infection research.

This groundbreaking work was just published in the journal Nature Microbiology. Using bacterial single-cell RNA sequencing it might be possible to elucidate the tricks bacteria use to develop resistance and close these loopholes with tailored drugs.

"Even when growing together under the same condition individual bacteria can behave very differently," says Professor Jörg Vogel, director of the HIRI and chair of the Institute for Molecular Infection Biology at Julius-Maximilians-Universität (JMU) Würzburg in Bavaria, Germany. "Some stand out from the crowd of their genetically identical siblings and defy life-threatening conditions, such as antibiotic treatment.” What characteristics make these outliers become bacterial superheroes is not yet understood.

The research teams led by Vogel and Dr Emmanuel Saliba, head of the HIRI lab “Single-cell Analysis”, has taken a giant leap forward with their current study: They have succeeded in profiling individual bacteria using what is known as single-cell RNA sequencing, a feat previously only achieved with much bigger cells of other organisms. Why has bacterial single-cell RNA sequencing been this challenging and what information does it provide?

In a bacterium, not every gene is constantly active. However, those genes necessary for the metabolism under given conditions will be switched on. The genetic code of an activated gene is transcribed into RNA (ribonucleic acid). The RNA in turn serves as a template for the production of proteins that fulfil certain functions within the cell. "The entirety of the RNA present in a bacterium - the so-called transcriptome - therefore indicates exactly which genes are necessary at that point in time and under the given circumstances in order to survive," says Saliba. "If we are able to analyse the transcriptome of a bacterium that resists antibiotic treatment, we can look deeper into its box of tricks."

Single-cell RNA sequencing has already been established for cells of eukaryotic organisms, including humans, other animals and fungi, but turned out to be much harder to implement for bacteria, for a simple reason. The RNA of eukaryotic cells has a short chain of a certain RNA building block called adenosine (A) at one end. "For the current method of single-cell RNA sequencing, this poly-A tail is the starting point for the isolation of RNA from individual cells," says Saliba. "However, there is no such poly-A tail in bacteria. Therefore, the analysis of RNA within individual bacteria was previously not possible.”

In addition, a bacterial cell contains an extremely small amount of RNA, namely in the femtogram range (trillionth of a gram). This makes the isolation and handling of bacterial RNA even more difficult. The HIRI researchers therefore used a poly-A-independent method known as MATQ-seq (multiple annealing and dC-tailing-based quantitative single-cell RNA-seq). Here, the bacterial RNA is obtained in a different way and propagated in a controlled manner, so that the amount of RNA is sufficient for subsequent analysis.

In their investigations, the HIRI researchers exposed the well-known bacterial pathogen Salmonella to different stress conditions. One sample was exposed to a salt shock, the other put under oxygen-free conditions. The scientists then used their new single-cell RNA sequencing protocol to create the respective RNA profiles and compared them with those of Salmonella cultures from an established database. "It made sense to use Salmonella as a model organism in our study: We have been working with it for many years, and it is grown in hundreds of research laboratories across the globe. We wanted to test whether our approach worked," says Vogel. "And it does - the RNA profiles from our tests matched those in the database." The fact that single-cell RNA sequencing now also works for bacteria opens up completely new possibilities in infection biology research.

"With single-cell RNA sequencing, we have taken a giant leap forward in order to better understand bacterial pathogens and the development of antibiotic resistance. Also, we can now identify possible starting points for effective drugs," Vogel continues. As shown in the paper published in Nature Microbiology, the method also works with pseudomonads, i.e. bacteria that are infamous for colonising the lung.