An undesirable effect can occur in super-resolution fluorescence microscopy: photoblueing. A new publication in „Nature Methods“ shows how it can be prevented or made useful for research.

Confocal fluorescence images of glass surfaces coated with the cyanine dyes Alexa Fluor 647 (a) and CF660C (b) and with carborhodamine dye ATTO647N (c) after light excitation at 568 nanometres (nm). By exciting the red-absorbing dyes at 640 nm in certain areas (negative images top right), dyes are photoconverted there and it is possible to write letters on the surface that were excited at 568 nm and fluoresce at about 580 nm. The carborhodamine dye shows more efficient photobluing than the cyanine dyes. (Image: Team Markus Sauer / Universität Würzburg)

The latest developments in fluorescence microscopy make it possible to image individual molecules in cells or molecular complexes with a spatial resolution of up to 20 nanometres. However, under certain circumstances, an effect occurs that falsifies the results: the laser light used can cause very reactive oxygen molecules to form in the sample. These can then damage the fluorescent dyes used to such an extent that they no longer fluoresce. Among microscopy experts, this effect is known as photobleaching.

However, various fluorescent dyes can also be transformed by photobleaching so that they absorb light of shorter wavelengths. "A previously red fluorescent dye then glows green. Its fluorescence has been shifted towards the blue range on the wavelength scale. This is why this effect is called photoblueing," explains Professor Markus Sauer, an expert in super-resolution microscopy from the Biocentre of Julius-Maximilians-Universität Würzburg (JMU) in Bavaria, Germany.

Sauer's team now presents the exact molecular mechanism of photoblueing for cyanine dyes like Cy5 for the first time in the journal Nature Methods. Dr. Martin Schnermann from the Center for Cancer Research in Frederick (USA) is also involved in the publication.

"Because we understood the mechanism so precisely, we were able to prevent photoblueing by simple additives such as vitamin C or to increase it by adding a kind of catalyst," says Markus Sauer.

Preventing photoblueing can be quite important. Although the effect can only affect a few percent of the dye used, it can nevertheless lead to errors or misinterpretations of the microscopy, for example in energy transfer experiments (FRET). This is because the converted dyes are detected with the same high sensitivity as the starting products.

"Our results show which dyes are affected and how photoblueing can be prevented by simple buffer additions," Sauer summarises the contents of the Nature Methods paper. "But they equally show how photoblueing can possibly be used advantageously for fluorescence imaging and for tracking single, specifically converted dye molecules."

That's exactly what Sauer's team plans to tackle next: Photoblueing is to be further developed for, among other things, the targeted tracking of individual bacterial and viral particles in infection processes. The work described here was funded by the German Research Foundation DFG. 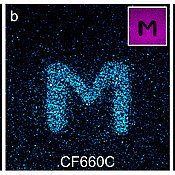