Why Cereal is Better

Cereal is much more drought-tolerant than other plants. Researchers from Würzburg have now found out why that is so. Their insight could help breed crops that are more resistant to drought. 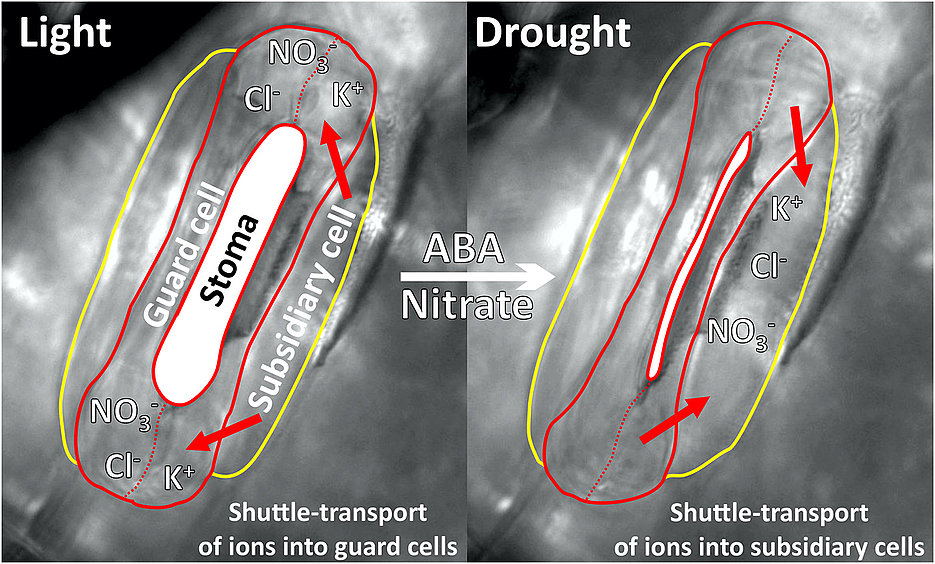 Processes in a leaf pore (stoma) of grasses. When the leaves open and close, a shuttle service takes ions to and fro between guard cells and subsidiary cells. (Picture: Dietmar Geiger)

Whether barley, wheat, maize or rice: The grass family includes all the major cereals. They are vital for feeding the world's population. Farmers produce 80 percent of all plant-based foods from grass crops. This success is due in part to the plants' ability to adjust more quickly to dry conditions and sustain lack of water better than other plants.

But why are grasses more tolerant to water scarcity? Can other food crops be bred for this property, too, to assure or boost agricultural yields in the future? This could be important in the face of a growing world population and climate change that will entail more periods of dry and hot weather.

The plant researchers Professor Rainer Hedrich, Professor Dietmar Geiger and Dr. Peter Ache from Julius-Maximilians-Universität Würzburg (JMU) in Bavaria, Germany, are looking into these questions. They studied brewing barley to determine why grasses are more stress-tolerant and are therefore "better" crop plants than potatoes and the likes.

The scientists discovered that this difference can be attributed to the protein SLAC1 of the guard cells. Just two amino acids, the building blocks that make up proteins, are responsible for the plant's drought tolerance. "We now want to find out whether this small difference can be harnessed to make potatoes, tomatoes or rapeseed more tolerant to stress as well," says Rainer Hedrich.

The new insights have been published in the prestigious journal "Current Biology" where Hedrich, Geiger and Ache describe how they pinpointed the tiny difference between grasses and other plants.

Ion transport is a key process

The JMU researchers began scrutinising microscopically small leaf pores called stomata. These openings admit carbon dioxide for photosynthesis into the plant. But they also serve as outlets for water. To prevent losing too much water through evaporation, land plants have learned during evolution to actively open and close their stomata using special guard cells. Membrane proteins such as SLAC1 play a key role in this regulatory process: acting like channels, they guide ions into and out of the cells.

Hedrich is convinced that a basic understanding of the molecular goings-on during ion transport through the plasma membrane of the guard cells is the key to improving the drought tolerance and yields of agricultural crop plants.

The stomata of grasses have a special feature: The pore is bordered by two pairs of cells where other plants only have a single cell pair. Grass cereals boast two dumbbell-shaped guard cells that form and regulate the pore. Additionally, they are flanked by two subsidiary cells.

There is a second mechanism that makes grasses more tolerant to dry conditions. When water is scarce, plants produce the stress hormone ABA (abscisic acid). Inside the guard cells, it activates the ion channels of the SLAC1 family, thereby initiating the closing of the stomata to prevent the plant from withering within a matter of minutes.

"Interestingly, we found that nitrate must be present in brewing barley and other grass cereals in addition to ABA to enable the pore to close," Peter Ache says. The nitrate concentration allows the barley to measure the shape the photosynthesis is in. If it works smoothly, nitrate levels are low.

Barley hence relies on two measuring systems: It uses ABA to register water availability and nitrate to assess photosynthesis performance. "By combining the two, the barley is better able than other plants to negotiate between the extremes of 'dying of hunger' and 'dying of thirst' when facing water scarcity," Rainer Hedrich explains

Testing the nitrate sensor in other plants

Which mechanism is responsible for the difference in stoma regulation at the molecular level? To answer this, the researchers analysed SLAC1 channels of various herbaceous plants compared to grasses. This allowed them to identify the "nitrate sensor" of the grasses: It is comprised of a motif of two amino acids which first occurred in moss during evolution and was subsequently further optimised to give the guard cells their unique properties.

In a next step, the team of researchers wants to establish whether herbaceous agricultural crops also benefit from having a nitrate sensor. To achieve this, the scientists want to fit arabidopsis plants that lack the SLAC1 channel with the SLAC1 channel of barley. "If this step increases their stress tolerance, we can consider breeding optimised potatoes, tomatoes or rapeseed," Hedrich says.

Financed in the BayKlimaFit programme

The research activities were undertaken within the scope of the Bavarian BayKlimaFit consortium. Its goal is to find strategies to make food crops fit for climate change. The consortium receives funding from the Bavarian State Ministry of the Environment and Consumer Protection.