Patients suffering from congestive heart failure tend to have cognitive deficits. This is not because of the heart's reduced pumping capacity as a research team from Würzburg has recently found. 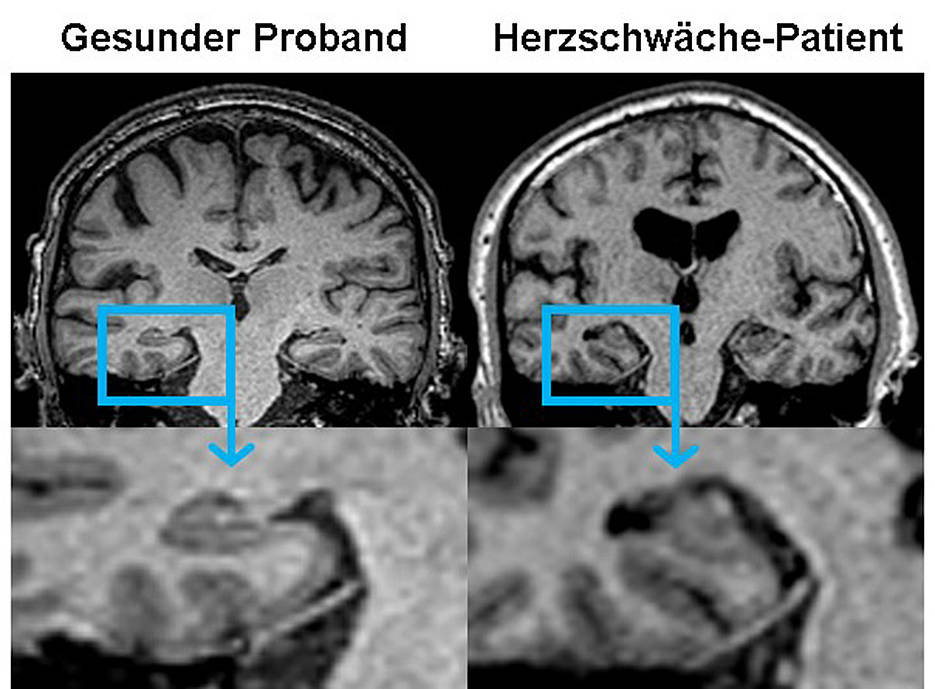 People suffering from heart failure require comprehensive treatment and must follow a strict medication regimen. But some patients fail to adhere to the latter – not because they are unwilling or negligent, but rather because the heart failure condition impairs their memory and attention.

A weak heart impairs the brain function: This hypothesis is backed by a new study from the Comprehensive Heart Failure Center (CHFC) in Würzburg in Bavaria, Germany. The cognitive dysfunction can even be imaged: MRI scans show abnormalities in the brain's temporal lobe. So far, researchers believed changes in the brain's white matter to be responsible, but this does not seem to cause the problem.

A research team consisting of cardiologists, neurologists, neuroradiologists and neuropsychologists of Julius-Maximilians-Universität Würzburg (JMU) and the University Hospital of Würzburg present these findings in Journal of the American College of Cardiology: Heart Failure.

The team included 148 patients of medium age in their "Cognition.Matters-HF" study at the Würzburg University Hospital. All had been diagnosed with heart failure at least a year before. The patients were extensively evaluated over two days. The tests involved ECG and echocardiography as well as cardiovascular examinations including the 6-minute walk test. Additionally, neurological tests were performed including carotid ultrasound imaging, neurophysiological tests and an MRI scan of the brain.

These tests found that 41 percent of heart failure patients had reaction time deficits, 46 percent had verbal memory problems and 25 percent working memory deficits. Compared to healthy controls, the MRI scans showed an atrophy of the temporal lobe which is important for memory formation. The atrophy is responsible for the cognitive impairments.

The research team is led by Dr Anna Frey and Professor Stefan Störk (cardiology) and Professor Guido Stoll (neurology). The study started in 2011. All tests are repeated after one year, after three years and again after five years. Over a third of the patients has presently completed the 5-year-examination.

"To evaluate the MRI scans of our congestive heart failure patients, we compared them with scans of 288 healthy, sex- and age-matched subjects sampled from the Austrian Stroke Prevention Study," Professor Stoll says. "Without the collaboration of Professor Reinhold Schmidt from the University Clinic for Neurology in Graz, Austria, we would not have obtained such conclusive findings that support a link between heart failure and cognitive dysfunction and alterations in the brain."

But why does congestive heart failure affect brain function? "Obviously, the pumping function is not the cause of the problem," the lead author of the study, Anna Frey, explains. "There is no direct relationship between the restricted pumping capacity and the impaired cognitive function. But patients with cognitive impairments had reduced physical endurance: During the 6-minute walk test, patients with impaired heart and brain function did worse than those whose brain function appeared normal".

A dilemma for patients

"The findings emphasize the need for more studies aiming to increase the cognitive function of patients that suffer from congestive heart failure," says Professor Georg Ertl, the Medical Director of the Würzburg University Hospital. "This is because patients affected by reduced cardiac and cognitive performance face a dilemma. Congestive heart failure increases the cognitive load due to various tasks such as adhering to a complex medication regimen, regularly checking vital parameters, taking pills consistently and restrictions of the amounts patients are allowed to drink. This clashes with the patients' impaired cognitive skills. A lot of patients are simply unable to follow the treatment regimen for this reason. As a result, both the quality of life and the disease deteriorate gradually.

Doctors should step up care

Professor Störk, head of the heart failure outpatient clinic at the Comprehensive Heart Failure Center in Würzburg, draws the following conclusion: "The study underpins the need of stepping up the care for heart failure patients in the future. This begins with telling patients about their diagnosis in an appropriate manner, ideally in the presence of a relative. It continues with the treatment regimen given to patients preferably in writing and it ends with patient support from a nurse specialized in congestive heart failure who regularly contacts them, checks their vital signs and verifies whether they take their medicine, accompanying them until the symptoms stabilize. We already knew from our own studies that this approach is decisive. Based on the findings of Cognition.Matters-HF, we now have an increasingly better understanding of why that is so. Using cognitive tests, we will hopefully be able to assess patients more efficiently already while making the diagnosis and help them in a more targeted way".

A lot of patients have no cognitive impairments

But Anna Frey warns against making general assumptions: Not all patients with congestive heart failure also have impaired cognitive function: "After all, 32 percent of study participants did not exhibit any abnormalities in the brain whatsoever. Only 16 percent of our patients had serious cognitive deficits."

Publication on the study

Web link to the publication