Light pollution makes it difficult for dung beetles to find their way. This is probably also true for other nocturnal insects and birds, as researchers suspect.

A nocturnal dung beetle climbing atop its dung ball to survey the stars before starting to roll. (Image: Chris Collingridge)

The growth of cities with their streetlights and illuminated buildings has led to brighter nights. This has consequences for animals: the artificial light illuminates them directly, but also lights up the sky, making the stars invisible. Yet many animals rely on the stars as their compass for orientation.

Until now, no scientific study has examined the effects of light pollution on animal star orientation. A study led by Dr James Foster from the University of Würzburg in Germany, in collaboration with researchers from Lund University in Sweden and the University of the Witwatersrand in South Africa, has now changed that.

In the journal Current Biology, the researchers show that South African dung beetles (Scarabaeus satyrus) are unable to use their star compass under light-polluted skies.

Quickly away from the dung pile

When these nocturnal beetles find a dung pile, they form small balls from the dung and roll them away to a safe distance, where they can bury and consume the dung without interference from other beetles. To avoid hungry competitors who may steal their dung balls, they have to move quickly and purposefully away from the dung pile. They do this by travelling in a straight line, using the starry sky to hold their course.

Under natural conditions dung beetles disperse away from the dung pile, allowing them to avoid competing with one-another. When direct light pollution is available from buildings and streetlights, they move towards the bright lights instead of dispersing away from each other. This may increase competition and waste energy in needless fights over dung balls.

Experiments in the big city and in the countryside

"We suspect that flight-to-light by birds and moths may work in a similar way: light pollution could force them to abandon their star compass and fly towards bright artificial lights in order to have any chance at all of holding their course," says Dr James Foster from the Biocentre at the University of Würzburg.

The experiments were carried out in South Africa, on a rooftop in the centre of Johannesburg as well as in a rural area of the Limpopo province.

"Beetles that viewed direct light pollution behaved unnaturally, but were still oriented. But those that viewed light-polluted skies but no brightly-lit buildings were completely disoriented," Foster explains.

From this, the scientists conclude that animals inhabiting the hinterland between cities and the wilderness may be worst affected by light pollution – unable to see either stars or streetlights. 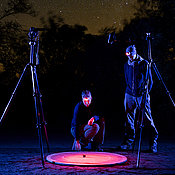 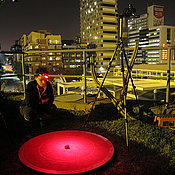