Viruses, bacteria, and other pathogens trigger changes to cell membranes in humans in the event of an infection. What exactly happens there will be investigated by a new research group at the universities of Würzburg and Duisburg-Essen. They will receive around two million euros for their work. 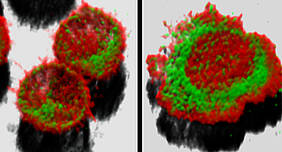 Contacts between pathogens and human cell membranes play a major role in an infection: the viruses or bacteria dock to special receptor proteins there. In so doing, they trigger processes that enable them to penetrate the cell, among other things. But the immune system’s defensive reactions, such as the activation of T cells, are also controlled by these processes.

The receptors often sit in well-defined regions of the cell membrane, where particularly large numbers of sphingolipid molecules are gathered. Simply put, these molecules consist of a head and tail. “If pathogens dock there, an enzyme is activated that decapitates the sphingolipids, creating ceramides,” explains virology professor Sibylle Schneider-Schaulies from the University of Würzburg. This then results in further changes to the membrane.

Sights set on measles viruses and other pathogens

It is precisely these membrane changes that will receive the attention of a new research group approved by the German Research Foundation (DFG) in early December. “We intend to make the changes visible and to observe them,” says the Würzburg virologist: “If we can understand their importance to the disease process, it might be possible to produce new treatments.”

The research group will focus on the following pathogens: measles viruses, meningococci (pathogens that cause meningitis, among other diseases), mycobacteria (tuberculosis), and gonococci (gonorrhea).

Facts about the new research group

Sibylle Schneider-Schaulies is the spokesperson for the new group (“Sphingolipid Dynamics in Infection Control”). It has brought together research teams from the universities of Würzburg and Duisburg-Essen. The DFG will provide the project with around two million euros in funding over the next three years; much of this money will be used to finance doctoral positions.

From the Institute of Molecular Biology at the University of Duisburg-Essen, the teams led by Heike Grassmé and Professor Erich Gulbins are involved, with the latter also acting as the deputy spokesperson for the research group.

In early December, the DFG set up four new research groups all at the same time (University of Würzburg, University of Bremen, Dresden University of Technology, and Ludwig Maximilian University of Munich). According to a statement by the DFG, research consortia should provide scientists with the opportunity to address current issues in their fields and to develop new methods for tackling them. All DFG research groups work across various locations and disciplines.