Twin jets pinpoint the heart of an active galaxy

German astronomers have measured the exact location of a black hole and the magnetic field near the event horizon. They show that magnetic fields are capable of providing enough magnetic energy to power strong relativistic jets in active galaxies. 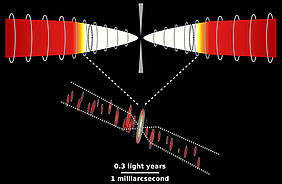 Twin jets emanating from the heart of an active galaxy: NGC 1052 at three millimetre wavelength, observed with the Global Millimetre VLBI Array. The illustration shows a very compact region in the centre, two jets running in opposing directions (bottom) and a sketch of the system with an accretion disk and two regions of entangled magnetic fields forming two powerful jets (top). The compact central source in the image pinpoints the location of the supermassive black hole at the heart of NGC 1052, and the enormous magnetic fields surrounding the event horizon trigger the two bright twin jets. (Illustration: Anne-Kathrin Baczko et al., Astronomy & Astrophysics)

When supermassive black holes spew out concentrated beams of matter into space at the speed of light, astronomers call this phenomenon "jets". Magnetic fields have been known to play a key role in the generation of these jets. German astronomers have now surveyed the surroundings of a black hole with unparalleled precision and measured the magnetic field near the event horizon. The project was managed by PhD student Anne-Kathrin Baczko. Her mentors are Professor Matthias Kadler from the University of Würzburg's Department of Theoretical Physics and Astrophysics and Eduardo Ros from the Max Planck Institute for Radioastronomy.

The scientists take great pride in the fact that students were consistently encouraged to participate in the successful project at the universities of Erlangen-Nuremberg and Würzburg: During her bachelor thesis, Anne-Kathrin Baczko was responsible for calibrating the surveyed data, ran in-depth scientific analyses during her master thesis and has now published the first part of her studies in the scientific journal Astronomy & Astrophysics in cooperation with the Max Planck Institute for Radioastronomy.

Her observations focused on a bright and very compact structure that is only two light days in size in the heart of active galaxy NGC 1052. NGC 1052 is an elliptical galaxy approximately 60 million light years away in the direction of the constellation Cetus (the Whale). The desired "images" were delivered by a global network of radio telescopes. The technique used to study NGC 1052 is known as very-long baseline interferometry or VLBI. It allows locating the jet base at sizes close to the event horizon of the central power source which is a supermassive black hole.

Although the jets are always emitted on both sides, they can usually be observed on one side of the black hole only. This is because the radiation of the jet closer to Earth's line of vision appears reinforced relativistically due to its great speed. At the same time, it dampens the radiation of the second jet so that it is generally no longer observable. Since the black hole itself remains invisible, its distance from the observed base of the "unilateral jet" is also unknown.

The images of NGC1052 in contrast show a baffling symmetry with two jets of nearly equal brightness which are accidentally located almost exactly in the plane of the sky and a central bright and very compact region from where the two jets seem to emanate. The "twin jets" of NGC 1052 therefore enable the researchers to pinpoint the exact position of the black hole in the galaxy, making it the most accurate localisation of a supermassive black hole in the universe with the exception of the black hole at the Galactic Center. "NGC 1052 is a true key source since it pinpoints directly and unambiguously the position of a supermassive black hole in the nearby universe," says Anne-Kathrin Baczko.

The magnetic field of the supermassive black hole was determined by measuring the compactness and brightness of the central region in the galaxy NGC 1052. This radio source has a diameter of just 57 microarcseconds which is equivalent to the size of DVD on the surface of the moon. This outstanding resolution was accomplished by the Global mm-VLBI Array, a network of radio telescopes in Europe, the US, and East Asia, that is managed by the Max Planck Institute for Radioastronomy. "It yields unprecedented image sharpness and is soon to be applied to get event-horizon scales in nearby objects”, says Eduardo Ros.

The unique powerful twin jets in a relatively close galaxy put NGC 1052 in a pole position for future observations of nearby active galaxies in the upcoming era of radio interferometry at millimetre wavelengths including ALMA, the Atacama Large Millimetre array.

Strong magnetic fields at the edge of the black hole

The further analysis of the images returned astonishing findings: The astronomers measured magnetic field values between 0.02 and 8.3 tesla directly at the event horizon of the central black hole. For comparison: The average strength of Earth's magnetic field is about 50 microtesla which is 50 thousandths of one thousandth tesla. These observations could help solve the long-standing puzzle of the origin of the high-energy relativistic jets found in the centres of many active galaxies. "The result has major astrophysical implications as it shows that the jets can be driven by the magnetic energy released from a rapidly rotating supermassive black hole," says Professor Matthias Kadler. 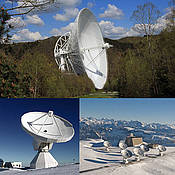