Staphylococcus aureus usually is a formidable bacterial pathogen. Sometimes, however, weakened forms are found in the blood of patients. Researchers of the University of Würzburg have now identified one mutation responsible for that phenomenon. 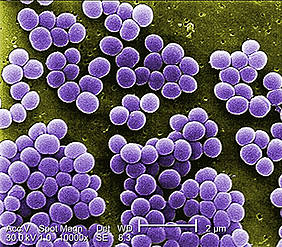 Staphylococcus aureus is a bacterium that is frequently found on the human skin and in the nose where it usually behaves inconspicuously. However, once inside the body, it can have life-threatening consequences such as abscesses, sepsis, pneumonia or myocarditis. How the pathogen manages to perform its disastrous work is still largely in the dark despite intensive research. Scientists from the Universities of Oxford and Würzburg have now unravelled an equally puzzling phenomenon. They present their results in the latest issue of the scientific journal PNAS.

"Recent studies have shown that in some cases Staphylococcus strains in the blood of patients differ substantially from those found in the nose," explains Professor Thomas Rudel, Head of the Chair of Microbiology at the University of Würzburg and one of the study's main authors together with his colleague Dr. Martin Fraunholz. "That is astonishing, as both types of bacteria often are very closely related in genetic terms," says Rudel.

The key differences: These bacteria are much less capable of destroying human immune cells in the blood – compared to their nasal relatives. At the same time, this mutation still allows the bacteria to enter the bloodstream in great numbers, survive much longer, causing a so-called bacteremia.

Differences due to mutation in one gene

In their search for the factor responsible for this loss of dangerous properties, the researchers stumbled upon a specific gene, called rsp in scientific lingo. This gene encodes a transcription factor, i.e. a protein that plays a central role in reading genes and producing proteins. "If the gene is mutated, the properties of the bacteria populating the nose change: their toxicity declines drastically. As a result, bacteria with rsp mutation are absorbed efficiently by the immune system's phagocytes, but they are destroyed after a certain delay only," Rudel further. Being mobile, these immune cells can spread throughout the human body like a Trojan horse, frequently with fatal consequences.

No comparable mutations were found in Staphylococcus strains of the skin. So the scientists draw the conclusion that the new properties are only advantageous when the bloodstream is infected, but not when the skin or other soft tissues are affected.

"Our findings back the suggestion that spontaneous mutations are to blame when the regulatory system based on the rsp transcription factor loses its function," Thomas Rudel sums up the key results of the study. In consequence, the mortality drops at the start of an infection and the modified bacteria can penetrate deeply into the tissues and cause severe diseases. The scientists find this discovery particularly exciting for one reason: It shows that even slight changes to the bacteria's genetic make-up drastically change the pattern and course of the disease. These so-called mutations in the bacteria can even take place while populating humans.

Staphylococcus aureus translates as "golden grape-cluster berry". The name is derived from the phenomenon that the cells tend to form grape-like clusters that appear golden in colour. According to present research, around 25 to 30 percent of all people are carriers of the pathogen. Usually, it does not cause any problems. The pathogen only starts to spread when the immune system is weakened or the bacteria enter the human body through wounds.

A special variant of these bacteria has achieved dubious fame in the past years: The type of "Methicillin-resistant Staphylococcus aureus" – short: MRSA – is spreading increasingly in hospitals and retirement homes. What makes the germ so treacherous: It is resistant to most antibiotics – even to the strongest drugs which are used when all other standard therapies have failed.

Natural mutations in a Staphylococcus aureus virulence regulator attenuate cytotoxicity but permit bacteremia and abscess formation. Proceedings of the National Academy of Sciences of the United States of America, www.pnas.org/cgi/doi/10.1073/pnas.1520255113