Using a newly developed method, Würzburg researchers were able to identify thousands of cryptic peptides on the surface of cells for the first time. These findings could provide a new starting point for cancer immunotherapy. 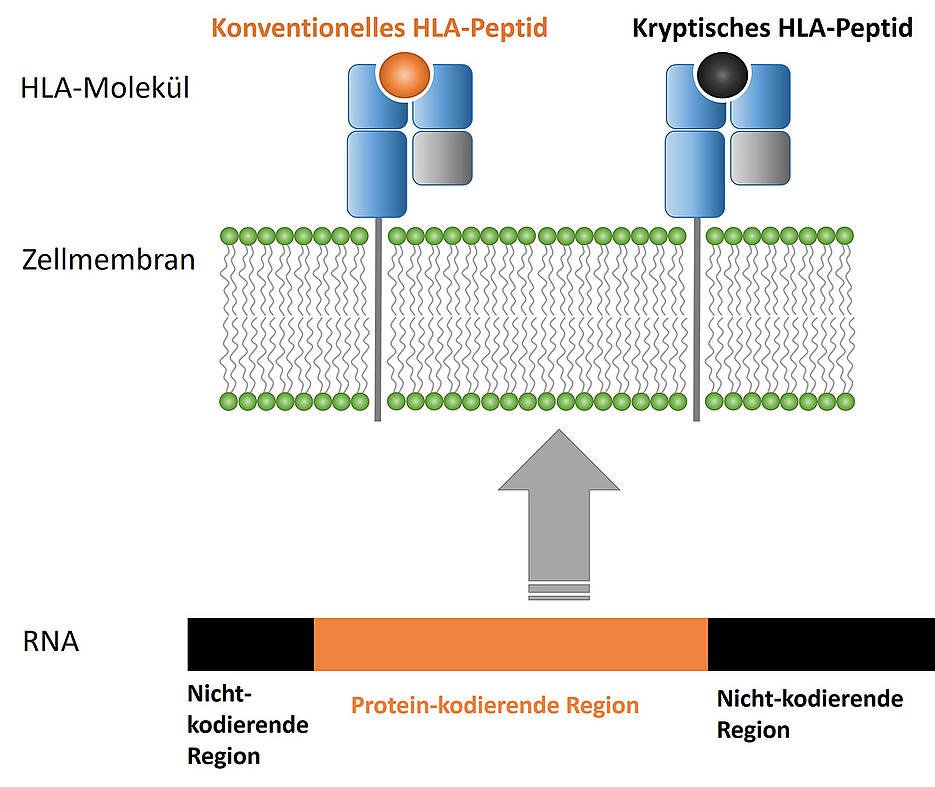 Almost all cells of the human body present fragments of cellular proteins on their surface, so-called human leukocyte antigens or HLA peptides, which play an important role in the immune response. If the immune system detects foreign HLA peptides, such as viral peptides on a virus-infected cell or mutated peptides on a tumour cell, T-cells eliminate the corresponding cell. The entirety of the HLA peptides presented on a cell is referred to as the cell´s immunopeptidome.

Besides the usual HLA peptides, there are also cryptic HLA peptides. These are derived from specific RNA sequences that do not contain information for a specific protein as is usually the case.

Over the last few decades, only a few cryptic HLA peptides have been identified because they are very small and are quickly degraded in the cells. On the other hand, efficient computer algorithms for the analysis were lacking.

In a completely new approach, the scientists from the University and the University Hospital Würzburg have now combined several analytical methods that are particularly suitable for small peptides. The findings were published in the journal Cancer Immunology Research.

"Using a novel bioinformatics method developed by us, for the first time we were able to identify thousands of cryptic HLA peptides in the immunopeptidomes of a wide variety of tumors such as melanoma and breast cancer," explains Dr. Andreas Schlosser, research group leader at the Rudolf Virchow Center at Julius-Maximilians-Universität (JMU) Würzburg in Bavaria, Germany.

The new bioinformatics approach is based exclusively on data from mass spectrometry, a method for determining the mass of molecules such as Peptides. This makes it possible to systematically and comprehensively determine the cryptic HLA peptides. In addition, it was possible to clarify on which cells and to what extent cryptic peptides are present: "We were able to show that cryptic HLA peptides make up a significant part of the immunopeptidomes of tumors," explains Professor Florian Erhard, group leader at the JMU Institute of Virology.

Effective points of attack for the immune system

It was already known from individual studies that cryptic peptides can trigger autoimmune reactions such as in diabetes type 1 as well as immune responses against tumor cells.

The Würzburg scientists are already examining a selection of the identified peptides to determine whether they are suitable as targets for cancer immunotherapy. Virus-infected cells also present cryptic HLA peptides that could be used as a target structure for vaccines.

With their new method, the researchers thus have an effective tool in hand to learn more about the general function and formation of cryptic peptides. "We hope that our bioinformatics approach will provide us with a better understanding of autoimmune reactions as well as immune reactions against tumour cells and virus-infected cells," says Schlosser.