Autonomous adenomas are the most common benign tumours of the thyroid gland. Mutations in two genes account for around 70 percent of the cases. Scientists from the University of Würzburg have now discovered another key trigger. 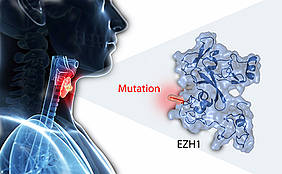 A significant number of autumnous adenomas carry a mutation in a gene that is involved in controlling cell proliferation and differentiation. EZH1 – or Enhancer of Zeste Homolog 1 – is the scientific name of this gene. (Graphic: Davice Calebiro / Kerstin Bathon)

Thyroid hormones are involved in controlling many functions of the human body: They influence sugar, lipid and protein metabolism, regulate body temperature, heart rate, circulation and many more functions. In children, they also control the development of the brain and nerves as well as bone growth. No wonder that hyperthyroidism has several detrimental effects in the affected patients. Typical symptoms include persistent restlessness, irritability, insomnia, inexplicable weight loss, excessive sweating and an increased pulse. Untreated hyperthyroidism has severe consequences, including, most importantly, a higher mortality for cardiovascular disease.

Search for the responsible mutations

In many cases, such a hyperfunction is triggered by thyroid tumours, most of which are benign. Among them, the so-called autonomous adenoma accounts for the majority. Its genesis is in general well understood: "We know that special mutations in certain genes are responsible for around 70 percent of all autonomous adenomas," says Dr. Davide Calebiro from the Institute of Pharmacology and Toxicology and the Bio-Imaging Center/Rudolf Virchow Center of the University of Würzburg.

However, it has been unknown until recently whether these mutations alone are sufficient to prompt thyroid cells to proliferate and produce excessive hormones, or whether additional factors have to be present. Also, it was unclear which factors are involved in the genesis of the remaining 30 percent of autonomous adenomas.

Publication in the Journal of Clinical Investigation

"For our study, we examined 19 autonomous adenomas using whole exome sequencing," Calebiro describes their approach. This technique does not investigate the entire genome of the cells; rather the focus is on the so-called exons of the genes – which are the pieces that are actually translated into proteins. Usually, the exons ("exome") account for 1-2% of the total DNA. "We were able to show that a significant number of these adenomas carry a mutation in a gene that is involved in controlling cell proliferation and differentiation", Calebiro further explained.

EZH1 – or Enhancer of Zeste Homolog 1 – is the scientific name of this gene. EZH1 mutations work synergistically with the other known mutations, leading to the formation of autonomous adenomas. Moreover, functional studies show that EZH1 mutations modify signal pathways that cause thyroid cells to proliferate.

"We were able to show that a hot-spot mutation in the EZH1 gene is the second most common genetic defect in autonomous adenomas," Davide Calebiro puts the result of their recently published work in a nutshell. In his opinion, the frequent association of EZH1 mutations with those in previously known genes points to a "two-hit model". Accordingly, the first mutation increases the disposition for the formation of tumours, whereas the second triggers the disease process.