A satellite whose components are not connected through electric cables but miniaturised radio modules: This innovation has earned two computer scientists from the University of Würzburg the first place in the INNOspace Masters competition. 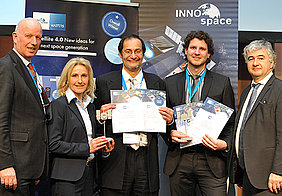 Professor Sergio Montenegro and his fellow researcher Tobias Mikschl have reason to be happy: A few days ago, the two computer scientists from the Julius-Maximilians-Universität (JMU) Würzburg in Bavaria, Germany, took to the podium in Berlin – as the overall winners of the INNOspace Masters competition and as winners of the category "DLR Space Administration Challenge". DLR is the national aeronautics and space research centre of the Federal Republic of Germany.

What the price was awarded for: Montenegro and Mikschl developed Skith, a technology for the world's first wireless satellite. Previously, all single components of a satellite had to be interconnected using electric cables. Skith has changed that by using miniaturised high-speed real-time radio modules with short ranges. This reduces design effort and costs while boosting the satellite's technical reliability and flexibility.

Test in space planned for 2018

Skith stands for "skip the harness". As a reward for their innovation, Montenegro and Mikschl received a certificate, a satellite-shaped trophy and the invitation to apply for money with the DLR to fund new projects.

Facts about the competition

The DLR has organised the competition for the first time. Under the motto "Satellite 4.0", participants were invited to submit suggestions and concepts for the future of aeronautics. 50 companies, universities and research institutions from eight European countries participated. In the end, nine finalists in three competition categories convinced the jury with their ideas. The awards ceremony took place at the INNOspace Masters Conference in Berlin on 4 May 2016.

The competition is organised by DLR Space Administration on behalf of the German Federal Ministry for Economic Affairs and Energy. The competition is part of the INNOspace initiative that has promoted innovations and technology transfers between astronautics and other industry sectors since 2013.

DLR press release on the competition

Link to the homepage of Prof. Dr. Sergio Montenegro