The Book of Judith – A Free Translation?

1600 years ago, the Church Father Jerome took a highly creative approach to the translation of the Old Testament Book of Judith: he cut the original text down to about a half, as the theologian Lydia Lange demonstrates in her doctoral thesis. 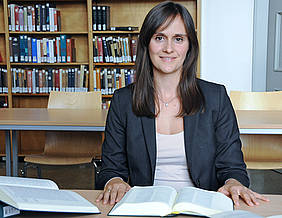 Lydia Lange in the library of the Chair of Old Testament Studies and Biblical-Oriental Languages. (Photo: Robert Emmerich)

A beautiful and pious widow rescues her town and the whole people of Israel from the army of the Assyrian general Holofernes. This story is told in the Book of Judith in the Old Testament.

The condensed version is as follows: The Assyrians besiege the mountain stronghold of Bethulia, the situation for the people inside is hopeless. This is when the widow Judith goes to the enemy's camp, where her extraordinary beauty gives her access to Holofernes. After a banquet in her honor, she succeeds in beheading the drunken general in his tent. With the severed head she returns to her people, which picks up courage, dares to make a breakthrough and drives the Assyrians away.

“The Book of Judith is one of the more recent works of the Old Testament; it was written down for the first time about 100 b. C., in Greek”, says Lydia Lange (32) from the Faculty of Catholic Theology of the Julius-Maximilians-Universität (JMU) Würzburg in Bavaria, Germany. In her doctoral thesis, Lange has analyzed different Latin translations of the book, especially the Vulgate version created around 400 a.C. by the Church Father Jerome.

The first comparison showed: Jerome shortened and changed the text to such an extent that only about half of the original is left in his “translation”. The JMU theologian therefore performed a meticulously precise text comparison.

“Jerome emphasizes Judith's chastity – but the Greek original and the other Latin translations do not mention that word at all”, says Lydia Lange. Also, Judith acts in the original text without divine assistance, but Jerome makes God intervene in the action: precisely because of Judith's chastity, God makes her even more beautiful.

Why does a translator do such a thing? To answer that question, Lange looked in depth at Jerome himself, his works and letters that have been preserved. “In Rome, Jerome surrounded himself with wealthy widows and virgins”, she explains. He conveyed to them how to live in God's way – namely in chastity and abstinence. For example, the women were supposed to fast, not to use makeup and to live a secluded life. It is likely that the Church Father allowed his ideals to enter into his translation work, and to cumulate in the figure of Judith.

Jerome may also have used a strategy that is commonly used in theater and literature up to this day: recasting an old story for the present. In the Greek original text, Judith always withdraws for praying into a tent on the roof of her house. In the translation, she performs her prayers, together with other women, in a chamber inside the house – “that was the custom in Rome in Jerome's days”, explains Lange. The researcher therefore strongly supposes that the Bible translator wished to cast the book into a contemporary setting so as to make it easier to understand for his contemporaries.

Conclusion: The Vulgate version of the Book of Judith is much more than a mere translation. In her doctoral thesis, Lydia Lange demonstrates impressively how and under which perspectives the Church Father Jerome worked with the text and developed it further.

Development of a figure analysis

She has developed for this study a both exegetical and cognitive scientific figure analysis based on classic narrative and more recent cognitive narratological methods. “It enables us to make statements on the text, to put the focus on the world outside the text, and to examine the textual strategies used by writer and the understanding of contemporary readers”, says the Würzburg theologian.

The doctoral thesis was published in July 2016 in german language in book form by De Gruyter. Her supervisor was Professor Barbara Schmitz, Head of the Chair of Old Testament Studies and Biblical-Oriental Languages at the University of Würzburg.

Link to the homepage of the Chair 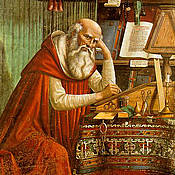 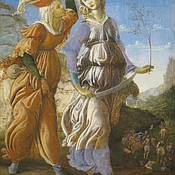