The German foundation Else‐Kröner‐Fresenius‐Stiftung has again granted the support of the Excellence Scholarship Program BEBUC for the next three years – it is already the fifth grant in a row. The aim of the project is to recognize brilliant talents in the Congo and to promote them on their way to a professorship.

Search for new agents against cancer and infectious diseases from Congolese plants: the BEBUC scholars Blaise Kimbadi Lombe (left) and Jean-Pierre Mufusama, PhD students in the lab of Gerhard Bringmann at the University of Würzburg. (Photo: Florian Seitz)

With this grant, the foundation shows its appreciation of the unique concept of the scholarship program in the Democratic Republic of the Congo. The project has been running for nearly ten years already, eight of them with support by the foundation Else‐Kröner‐Fresenius‐Stiftung. "We are deeply grateful to the foundation", says Professor Gerhard Bringmann from the Institute of Organic Chemistry of the University of Würzburg, the President of the scholarship program. Together with Professor Virima Mudogo (University of Kinshasa and alumnus of the University of Würzburg), he had founded the project in 2008. "Without such a strong and reliable partner by our side, BEBUC would not be what it is today."

The program is organized by the NGO Förderverein Uni Kinshasa e.V. (fUNIKIN). The finances of the project in Europe are managed by the University of Würzburg. Its President, Prof. Alfred Forchel, congratulated the entire Panel on the success of the project and its continued funding.

The project currently supports more than 180 scholars. In the course of the next evaluation round in January 2018 in the West and Center of the Congo, this number may still increase – but only marginally, because the longplanned final development target of about 200 scholars has already been nearly reached.

In addition to the financial support of the scholars, BEBUC particularly offers a regular and specific mentoring, which takes care of the individual visions and talents of the scholars and the needs of the country. Likewise characteristic are the personal sponsorships. Moreover, the regular joint excursions and seminars promote the feeling of togetherness among the scholars and facilitate scientific collaborations, and even network formation.

BEBUC as a Community of Values

Of particular importance in BEBUC are not only outstanding study records and good English language skills, but also ethical values, even in such a difficult environment. This is nicely illustrated by the democratic selforganization of the network. The scholars elect, at each institution, a Speaker, and, according to the number of scholars, one or several Vice Speakers, who jointly form a Congo‐wide Speakers' Council, which, in turn, elects a Prime Speaker. In the Speakers' Council, there are now, since recently, also representatives of those scholars that are currently pursuing their master or PhD studies abroad – in Africa, America, Europe, or Asia. The presently more than 30 such "External Scholars" are now about to form a jointly organized "Virtual External Institute" – all these are democratic structures that really work well.

Medicine Increasingly in the Focus

Emphasis of the support will increasingly be put on young Congolese scientists in the field of medicine and life sciences. This will take into account the difficult medical situation in the Congo and the objectives of the foundation.

"In the future we thus expect a 'demographic change' in the composition of the scholars towards life sciences and towards a higher portion of further advanced scholars, like master and PhD students", says Bringmann. "And very much to our joy, several of our scholars in these fields will reach their long‐planned goal in 2018: the professorship in the Congo!

Information on the Scholarship Program BEBUC and the NGO Förderverein Uni Kinshasa e.V. 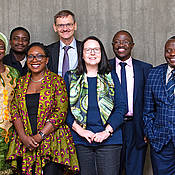