Using a simple urine test alongside routine imaging for patients with adrenal masses could speed up adrenal cancer diagnosis, improving patient’s prognosis and reducing the need for invasive diagnostic procedures, a new multi-centre study has found. 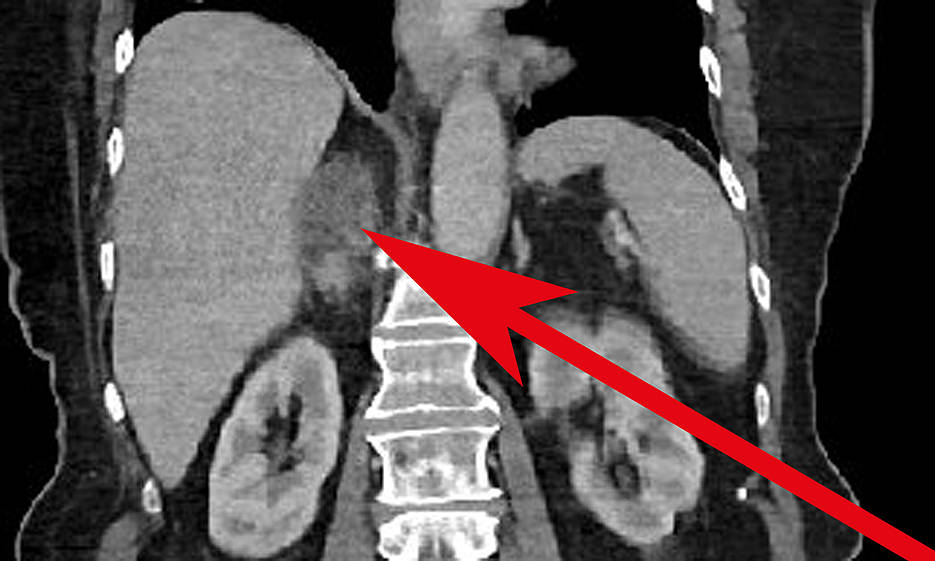 Randomly discovered adrenal gland tumour on the right side with a size of 5.1 centimetres. (Image: UKW)

Imaging procedures, such as CT and MRI scans, are used in clinical practice with increasing frequency and often lead incidentally to the discovery of a nodule in the adrenal glands, detected on average in 5% of scans. These so-called adrenal incidentalomas are in the majority harmless, but once an adrenal mass has been discovered it is important to exclude adrenal cancer as well as adrenal hormone excess. Prognosis for patients discovered to have an adrenal cortical carcinoma (ACC) – a cancerous adrenal mass – is poor, and a cure is only achievable through early detection and surgery.

The incidental discovery of an adrenal mass often triggers additional scans to determine whether the mass is cancerous. However, recent studies have suggested that imaging tests have limited ability in establishing whether a mass is cancerous or benign. Therefore, carrying out additional scans to characterise an adrenal mass increases costs, radiation exposure and anxiety in the patient, but mostly does not provide any more valuable information that could inform clinical management.

Led by experts from the University of Birmingham, a new multi-centre study, which is the first and the largest of its kind, has suggested that the addition of urine steroid metabolomics (USM) in the form of a simple urine test to detect the presence of excess adrenal steroid hormones - a key indicator of adrenal tumours – could speed up diagnosis and treatment for patients found to have an ACC and help eliminate the need for unnecessary surgery for patients with a harmless adrenal mass. The Endocrinology Department of the University Hospital led by Professor Martin Fassnacht is also involved in this project.

Over a six-year period, researchers studied more than 2000 patients with newly diagnosed adrenal tumours from 14 centres of the European Network for the Study of Adrenal Tumours (ENSAT). Patients collected a urine sample after being diagnosed and the researchers then analysed the types and amounts of adrenal steroids in the urine, with results automatically analysed by a machine learning based computer algorithm. Results showed that the urine test made fewer mistakes than imaging tests, which more frequently wrongly diagnosed ACC in a harmless adrenal nodule.

Professor Wiebke Arlt, Director of the Institute of Metabolism and Systems Research at the University of Birmingham, former researcher at the University Hospital of Würzburg and senior author of the study said: “We hope that the results of this study could lead to significant decreases in patient burden and a reduction in healthcare costs, by not only reducing the numbers of unnecessary surgeries for those with benign masses, but also limiting the number of imaging procedures that are required.”

Martin Fassnacht, who is currently also the president of the European Adrenal Gland Tumour Network ENSAT, and his research group are already working on the introduction of this new urine diagnostics for routine clinical practice in Würzburg. "As soon as we are ready, this will certainly accelerate and improve the diagnosis of patients with adrenal gland tumours considerably. We expect that patients with malignant changes in the adrenal glands will be identified earlier in the course of the disease, which will also improve the prognosis.

By Press Release University of Birmingham