Using a sensor film to monitor how well aircraft and spacecraft withstand the mechanical stresses of flight: Würzburg researchers have received a prize for this idea, which comes with a lot of money. 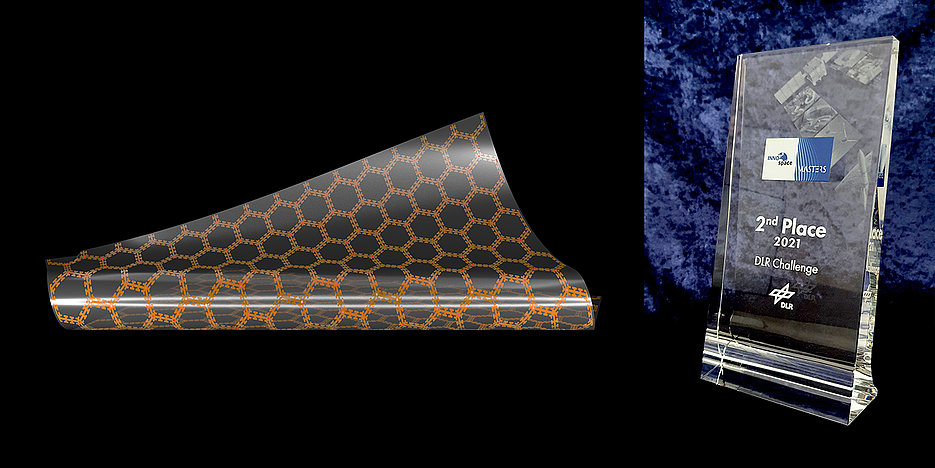 Model of the sensor film for measuring the material load of air and space vehicles in flight. On the right, the trophy with which this idea was awarded. (Image: Alexander Hilgarth / Universität Würzburg)

There is great joy at the Chair of Aerospace Information Technology: Alexander Hilgarth and Professor Sergio Montenegro were successful in the international INNOspace Masters competition.

They won second prize with their idea for a sensor film that can be applied to the components of aerospace vehicles and is monitoring them during flight. The award is linked to funding of up to 400,000 euros.

The researchers from Julius-Maximilians-Universität (JMU) Würzburg in Bavaria, Germany, want to use the money to make the sensor film ready for its first application. They have shown in preliminary studies that their idea basically works. The follow-up work will start in late autumn 2021 and should be completed after two years.

What are the benefits of such a film?

The sensor film can ultimately reduce maintenance costs in aerospace and make the reusability of space vehicles more likely, explains electrical engineer Hilgarth: "Only the reusability of carrier systems and components ensures the economic viability of being able to operate space travel in the sense of the 'New Space'. However, the possible cost savings are currently still limited by high maintenance costs."

The buzzword New Space describes the trend that private companies are also developing space activities. For example, the company SpaceX of the American entrepreneur Elon Musk. At the end of 2020, it used a space capsule on behalf of NASA to bring astronauts first to the International Space Station ISS and then back to Earth months later.

In addition, the sensor film can detect material defects that only occur under mechanical stress but remain hidden during inspections in the hangar. "One example of this are cracks whose fracture edges rejoin perfectly when unloaded," says Hilgarth. Such defects have been observed in composite materials made of plastics, for example.

Currently, it is not practical to monitor aircraft and spacecraft in flight with a comprehensive installation of measuring probes. "Conventional measurement technology is too big and too heavy for that," explains the JMU electrical engineer. This could change with the TOMOPLEX ("Tomographic Plexus") sensor film from Würzburg: it should enable continuous real-time monitoring.

The film uses tomographic measuring methods that are not yet common in aerospace. It functions as a circuit carrier for a wireless sensor network. According to the JMU researchers, it is space-saving and flexible. It can also be attached to hard-to-reach places on aircraft and spacecraft.

Facts about the competition

This time, the INNOspace Masters Challenge was held under the motto "Innovations for Sustainable Infrastructures – in Space and on Earth". It was aimed at smaller companies, start-ups, universities and non-university research institutions from all over the world. A total of 330 teams from 23 countries submitted 126 ideas. In the end, a total of 15 ideas were awarded in five categories. The prizes were awarded at an online conference on 29 July 2021.

The competition was held for the sixth time. The organiser is the German Space Agency at the German Aerospace Center (DLR) on behalf of the Federal Ministry for Economic Affairs and Energy. The competition is part of the INNOspace initiative, which has been promoting innovations and technology transfers between space and non-space industries since 2013.

Success for the second time

Sergio Montenegro's team has already been successful in the INNOspace Masters Challenge once before: in 2016, it won first place in the overall competition – with an idea for the wireless small satellite SKITH (Skip the Harness). This resulted in the INNOcube project, in which Montenegro's team is working together with TU Braunschweig to bring a wireless small satellite into orbit. The launch is planned for 2023.

DLR press release on the competition