Cancer researchers in Würzburg, in cooperation with the international Cancer Genome Atlas Research Network, have identified new genetic drivers of adrenal cancer. Würzburg was the center of coordination of the European scientists. 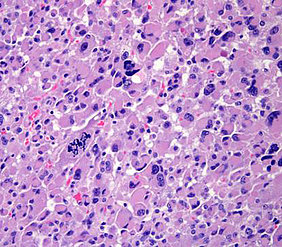 Section of adrenal cancer tissue under a microscope. The blue areas are the cell nuclei, and the cytoplasm is stained purple. (Figure: University Hospital Würzburg)

Research teams from 39 institutions in Europe, Northern America, Southern America and Australia have collected and examined 91 adrenal cancer samples. They have performed a comprehensive genomic analysis as part of the renowned “Cancer Genome Atlas Research Network”. The results were published by the scientists in the journal “Cancer Cell”. The European researchers of the worldwide project were coordinated from Würzburg.

The study names several new genes that lead to the development of cancer. Actually the study resulted in doubling the number of known genetic drivers.

“These data have implications for the diagnosis and prognosis of adrenal cancer.  They allow us to look deep into the biology of the disease and to understand how these new gene mutations contribute to adrenal tumor formation and the progression of the disease”, says Professor Martin Fassnacht, Head of Endocrinology at the Würzburg University Hospital and European coordinator of the study.

Collaboration was the key to this project. Adrenal cancer affects only an average of two in every million people worldwide per year. Because it is so rare, one institution just won't see enough patients to generate meaningful research. “We've been working on building adrenal cancer networks since 2003”, says Professor Fastnacht.

In 2003, the Center of Endocrinology and Diabetology of the Würzburg University Hospital initiated the creation of the German Adrenocortical Carcinoma Registry, which was integrated into the first European Network for the Study of Adrenal Tumors in 2009. That is why the Würzburg team and their European partners signed on immediately when the Cancer Genome Atlas Research Network announced the investigation of adrenal cancer as its first project on rare types of cancer.

The study revealed several interesting findings, says Dr. Silviu Sbiera, one of the participating scientific hormone researchers from Würzburg. One of the most exciting mutations was found in gene “ZNRF3”. Up to 20 percent of the adrenal cancer samples examined have a mutation of this gene.

Furthermore, the study demonstrated that mutations that were involved in benign diseases of the adrenal cortex may play a role in the development of adrenal cancer.

Another key finding was that many adrenal tumors undergo whole genome doubling: “A phenomenon in which each chromosome in the gene replicates and creates a second copy”, says Dr. Sbiera. This reflects instability of the cancer genome, which is particularly prominent in adrenal cancer.

“If we understand the mechanisms of how it happens , this will ultimately help us discover new therapies”, says Martin Fassnacht, who leads further clinical studies on adrenocortical carcinoma.

The researchers identified three different subtypes of adrenal cancer based on their molecular changes. These subtypes were associated with different survival rates of patients, which suggests that molecular biomarkers could be used to identify patients who are likely to have a more aggressive form of the disease. These patients may thus benefit from a more precisely matched therapy.

“Our findings represent the most complete characterization of adrenal cancer tissues and could be the key to a more successful therapy”, says Dr. Sbiera.

The complete data set from this project is published in freely accessible databases, so that they are available to any researcher worldwide for identifing potential new ideas to better understand this type of cancer.

The “open source concept” is especially important for adrenal cancer specialists. Adrenal cancer survival rates are dismal because it is often diagnosed in late stages of the disease. Also, no new treatment options have been developed since the 1970s because the disease is so rare.

“We are very motivated to continue our research on the basis of these new findings, because they have an enormous potential. The conclusions drawn from this paper will help fuel discovery in adrenal cancer as well as in other types of cancer,” Fassnacht says.

This project was funded by the European Research Area Network for Research Programmes on Rare Diseases, the Federal Ministry of Education and Research, the German Research Foundation and the University of Würzburg's Interdisciplinary Center for Clinical Research.