integrAi.de reaps first successes. Besides having implemented the first projects, the team is excited to receive the 1,500th Exist start-up grant of the German government and a grant of the association "startsocial". The initiative, which has its roots in the University of Würzburg, aims to place 20,000 refugees in Germany more quickly into work. 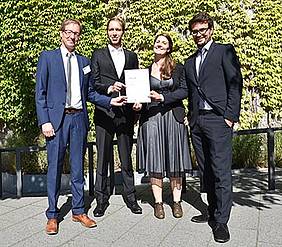 "Integrating refugees into the labour market is a central challenge for the German government, the Laender and municipalities. To accomplish this, we are reliant on innovative problem solutions," says Sigmar Gabriel (SPD), the Minister for Economic Affairs and Energy, referring to an initiative of the Faculty of Business Management and Economics of the University of Würzburg. The project "integrAi.de" launched by the Professors Sascha Friesike and Richard Pibernik with highly committed students makes a valuable contribution to solving this challenge society is facing.

In close collaboration with various partners, integrAi.de trains volunteers as job coaches who act as intermediary between refugees and companies. A structured process and supporting tools make it much easier for the job coaches to successfully place refugees into employment.

The first job coaches completed their training in the pilot city of Alzenau already in the summer. "We are reaping the benefits of our concept earlier than expected," says Bianca Heim of integrAi.de.  Several refugees of different nationalities – Afghan, Malian and Ukrainian – have already been placed in employment and internships, including permanent positions as carer for the elderly and locksmith and one internship as a paver with good prospects of getting a permanent position.

The key to the concept's success is the exceptional commitment of the volunteers which integrAi.de trained and continues to support. "The training and counselling have taught us the structure and methods to place refugees into employment more efficiently," says Waltraud Carsten, one of the job coaches in Alzenau.

In the municipality of Schermbeck in North-Rhine-Westphalia, integrAi.de will train more job coaches in December. Numerous other cities and municipalities from all over Germany have also shown interest in implementing the concept.

"We have received a lot of positive feedback and encouragement for our concept in the past months," says Richard Pibernik, Professor of Business Administration, and he adds: "We are of course highly motivated and encouraged by the fact that the concept has actually proved to work in practice so quickly."

Funded by the Exist programme and "startsocial"

The swift implementation of the job coach concept in countless municipalities and cities can only succeed if professional structures and full-time staff are in place. For this purpose, a social company will now be established that will focus exclusively on implementing the job coach concept throughout Germany and assuring its sustainability.

integrAi.de's founding team made up of graduates has now taken a first important step towards setting up the social company: The Federal Ministry for Economic Affairs and Energy (BMWi) funds the venture with start-up grants from its Exist programme initiated specifically to promote scientific startups. It is the BMWi's 1,500th Exist grant.

"We need seed capital in the amount of EUR 250,000 for the founding and startup phase. The funding provided by the Exist programme is an enormous relief for us, especially in the first year," Riemann says. integrAi.de gets additional support in the form of a grant provided by the association "startsocial".

In the coming weeks, the team of integrAi.de will be talking to other potential sponsors to secure the financing of the startup phase for good. From the third year, the social company is expected to be self-sustaining – in particular through membership and training fees from cities and municipalities. Any surpluses will be invested in non-profit projects.

"The Exist grant from the Ministry for Economic Affairs is much more than just a cash infusion," says Sascha Friesike, Head of the Chair for Entrepreneurship and Management at the University of Würzburg and a "start-up expert". "The job coach concept was thoroughly tested by the Exist experts and found to be not only sensible but also sustainable and promising – this is a hallmark of quality that will make the concept attractive for other sponsors, too," Friesike says. integrAi.de is one of a few social businesses sponsored by the Exist programme.