The German Aerospace Society awarded the prestigious Eugen-Sänger-Medal to Professor Klaus Schilling for his outstanding achievements in the development of small satellites. 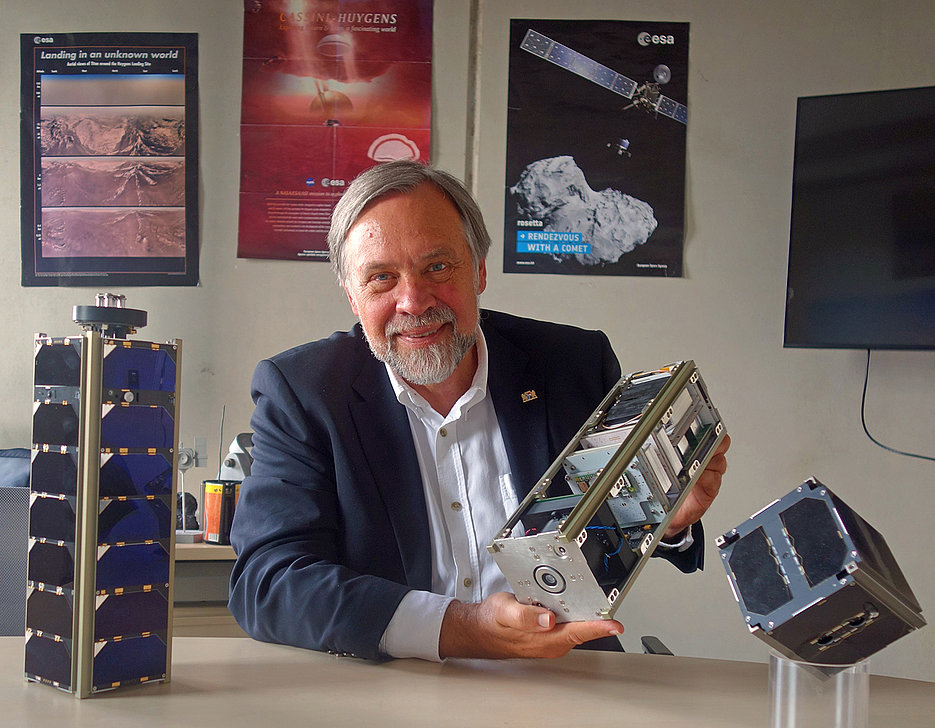 Klaus Schilling with the satellites that have accompanied his professional life. UWE and NetSat in the foreground; on the posters in the background HUYGENS and ROSETTA, which were realised during his work in industry. (Image: Informatik VII / Universität Würzburg)

Klaus Schilling leads the Chair of Computer Science VII (Robotics and Telematics) at Julius-Maximilians-Universität Würzburg (JMU) in Bavaria, Germany, since 2003. He initiated the JMU space study programs and successfully started a popular hands-on program for the development of miniature satellites.

The short construction times enable rapid technological advances and thus lead to innovative applications. "It is crucial that the disadvantages of miniaturization, such as increased sensitivity to the harsh space radiation are compensated for by intelligent software," explains Schilling.

On the microcomputers on board, algorithms for rapid fault detection, identification and recovery ensure reliable operation. Small companies, start-ups and universities like JMU have been able to provide essential contributions to this alternative “New Space” approach.

Building on his experience in the space industry, Schilling developed the University Würzburg’s Experimental satellites, or UWE as shorhandt, together with a lot of international students at JMU. This team realized in 17 years numerous technology breakthroughs for small satellites and proved them in orbit.

Today, the UWE satellites are considered a pioneering achievement: in 2005, UWE-1 was the first German pico-satellite with a mass of less than one kilogram. As the first of its kind, its engineering model has been presented in an appropriate location since 2012 – the Deutsches Museum in Munich. UWE-1 served industry as a test laboratory for highly efficient solar cells. In the meantime, this technology has become established in space: today, it generates the energy on the majority of European satellites.

While the internet in space was initially the focus of Schilling's research at JMU, the foundations for self-organizing multi-satellite formations became core of research and were realized step by step in over 17 years. As single small satellites are already an economic reality, Schilling's research is focusing on swarms of distributed satellite networks, including functionalities like avoiding collisions or that perform complex joint observations from complementary angles of view.

Schilling has now received the Eugen-Sänger-Medal 2020 from the German Aerospace Society DGLR for his special services to advance space science and space equipment.

Schilling is very pleased about the medal, which is considered the most important German award in the space sector: "This recognition is a great incentive for our team to continue working intensively on sophisticated space technology. The medal recognizes contributions, that were only possible through the cooperation of large teams. My special thanks therefore go to the competent international teams that I had the privilege of coordinating."

The award is named after the rocket scientist Eugen Sänger (1905-1964). In the 55 years of its existence, it has only been awarded 26 times to international space pioneers. Previous recipients were the rocket pioneer Wernher von Braun (1973), the founder of Germany's largest space company OHB Manfred Fuchs (1991), and also the astronauts Ernst Messerschmidt and Thomas Reiter (2017).

Space education and research in Würzburg

Parallel to the UWE research work, Schilling organized the first space technology lectures at JMU in the summer semester 2003, together with international experts. The great popularity among the students led to this offer being expanded further and further.

With the support of the European Union, the European elite program "SpaceMaster – Master in Space Science and Technology" was introduced in 2005, funded by scholarships under the EU's Erasmus Mundus program. For this joint Master, six European partner universities cooperated for 13 years; the first semester started in Würzburg for all students.

The impressive acceptance of the program by international applicants – typically there were 600 applications for 50 places offered –  led to a further expansion of the JMU space activities to six professorships in this field today and to new curricula, such as the Bachelor's and Master's degree in Aerospace Informatics and the international Master's degree in Satellite Technology in the Elite Network of Bavaria (as the successor to the SpaceMaster).

Orbit of a small satellite changed for the first time

Among other things, Schilling's team in Würzburg succeeded in modifying orbits of a pico-satellites for the first time. In 2018, the use of electric thrusters on a small satellite was demonstrated for the first time worldwide on UWE-4. This technology opens up new possibilities, for example, in removal of space debris, in collision avoidance or in extending the operational period of satellites.

In 2007, the JMU professor founded the independent research institute Zentrum für Telematik e.V. (ZfT), where he acts as president. In 2020, he and his ZfT team succeeded in launching four NetSat nano-satellites the size of a shoebox into space, with the aim of exchanging via intersatellite link relevant data and coordinating joint measurements.

"Up to now, almost all satellites are tele-commanded from ground control centers. Thus, modern digitalization technology based on distributed networked systems, which has already changed our everyday life on Earth, is now transferred into space," explains Schilling.

In the next step, it is planned to use these technologies of formation flight for new types of applications: In the CloudCT project, a formation of ten small satellites is used to characterize the interior of clouds by computed tomography methods. In subsequent missions information from three-dimensional images of Earth and of clouds will be employed for improved climate forecasts.

Schilling was able to finance the development of the control and self-organization approaches with two of the prestigious research prizes from the European Research Council (ERC). For the CloudCT mission (Cloud Tomography by Satellites for Better Climate Prediction), he and two Israeli colleagues received in 2018 the highest-ever European research award of 14 million euros, an ERC Synergy Grant.

The International Federation of Automation Engineers IFAC appointed him to the technical committees for mechatronics, telematics, aeronautics and astronautics, where he also held leadership positions. In 2014, IFAC honoured Schilling with its "Outstanding Service Award".

Klaus Schilling, born in Bayreuth in 1956, studied mathematics, physics and biology in Bayreuth and Munich. After completing his doctorate, he moved to the space industry in 1985: at Dornier System, he headed the "Mission and System Analyses" group in the scientific satellites division. On behalf of the European Space Agency ESA, his team was then responsible for the conception of the interplanetary space probes HUYGENS (to the Saturn system) and ROSETTA (for comet research).

Afterwards, until his appointment at JMU, Schilling taught the fields of artificial intelligence, computer science and robotics at the Ravensburg-Weingarten University of Applied Sciences. There he was also elected Vice-Rector for Research and International Relations. In 1992, he founded the Steinbeis Transfer Centre ARS, which focused on the use of advanced control, robotics and computer technology in industrial production.

Previous winners of the Eugen-Sänger-Medal