Physicists from Würzburg, Jülich and Duisburg-Essen took a decisive step forward in the development of stable quantum bits by using Majorana-particles, which are the basis for quantum computers.

Quantum bits are the basis for super fast quantum computers. Lately a german team of physicists took a decisive step forward in their development.

Almost 80 years ago the Italian physicist Ettore Majorana predicted particles, which are their own anti-particles. However, only in the last couple of years it was possible to get closer to the existence of Majoranas experimentally. By an experiment performed by scientists from Forschungszentrum Jülich the next step to create Majoranas, which can be used for quantum information processing, was done. In collaboration with scientists from University of Würzburg and Duisburg-Essen University evidence was found for extremely strong spin-orbit coupling in connection with a new kind of coupling mechanism in semiconductor nanowires. This is considered to be an important prerequisite to represent a quantum bit in a nanowire by a Majorana particle.

Nanowires are extremely thin semiconductor nanostructures, in which the electron propagation is restricted to only one spatial direction. At low temperatures the electrons are excited collectively and form discrete energy states. However, this is not sufficient. In order to create a Majorana particle in this kind of system, a special semiconductor material is required which couples the electron motion to its spin.

In the past researchers found indications for the presence of Majorana particles in these systems where a superconducting electrode was covering part of the nanowire. However, no proof of the existence of the helical energy gap was given at that time. The InAs nanowire, which was investigated by the Jülich researchers in the framework of the Virtual Institute for Topological Insulators (VITI), now, showed unambiguously the presence of a helical gap. In addition, a mechanism based on interaction effects was discovered, which creates a helical gap even at zero magnetic field. 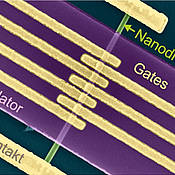 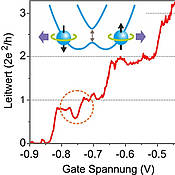