Plants can do maths

The carnivorous Venus flytrap carefully plans its meals: It can count how often it is touched by an insect to calculate the digestive effort. This discovery has been made by plant scientists of the University of Würzburg. 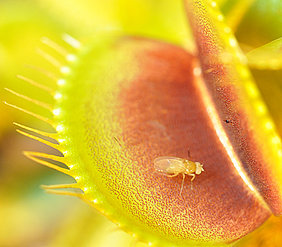 Insect on a Venus flytrap – it has not snapped shut yet. (Photo: Sönke Scherzer)

Usually, plants are eaten by animals and humans. With carnivorous plants, however, it's the other way round: They have specialised in animals as an extra source of nutrition to help them survive in moors or other nutrient-poor sites. Take the Venus flytrap (Dionaea muscipula) for example: It has a trapping structure formed by the terminal portion of leaves and is triggered by tiny hairs on their inner surface. These sensors allow the plant to discover, catch and digest flies and other fast animals.

The trap's insides are covered by a turf of red glands. This flower-like appearance combined with fruity smells attracts many insects. Looking for nectar, the visitors inevitably touch the three sensor hairs located on each of the lobes. Based on the number of times the trigger hair is stimulated, the plant decides whether to snap the trap closed and start digestion. This means that the plant is capable of counting.

The discovery was made by an international team of researchers around biophysicist Professor Rainer Hedrich from the University of Würzburg. Their work has been published in the renowned journal Current Biology.

If a trigger hair on the Venus flytrap is stimulated only slightly, it will signal the first prey contact by transmitting a bio-electrical signal. "One signal does not yet cause a reaction – it could be false alarm after all," says Hedrich. But a second stimulation already causes the trap to snap close in the blink of an eye.

If the prey stayed calm now, there would be no other signal. In that case, the trap will open again after a half day. But since the trapped animals usually put up quite a fight, they trigger a virtual fireworks of signals sealing their fate for good.

This is because the Venus flytrap can count further, as Hedrich's colleague Sönke Scherzer found out. He measured that a trapped insect triggers some 60 signals per hour. To imitate the contact stimuli, Scherzer nudged individual sensory hairs up to 60 times in an hour to see what happened.

The result: Two or more stimuli activate the pathway of the contact and wound hormone jasmonate JA. At five and more signals, the plant additionally activates the genes for digestions enzymes in all of its 37,000 glands. This activation does not take place if the jasmonate signal pathway is suppressed in experiments prior to mechanical stimulation. "We have thus proved that the electrical signal is converted into a hormone signal in the glands," Hedrich further.

Five or more signals also stimulate the transport molecules that provide for the absorption of the digested insects into the plant. While searching for this mechanism, one gene caught the attention of Würzburg Ph.D. student Jennifer Böhm. It is activated by both touching the sensory hairs and by the hormone jasmonate. She was able to demonstrate that it is an ion channel which transports sodium. Large quantities of this nutrient salt accrue when the insects are digested.

The plant can also do maths

"We asked ourselves whether the trap can calculate how many channels it must provide to remove the sodium," Hedrich explains. Obviously, the plant is able to do that: The bigger the prey animal, the more fiercely it will struggle and the more frequently the sensory hairs are stimulated. In that case, the Venus flytrap will produce more ion channels than for a weakly struggling animal.

And what about the plant's memory? According to Hedrich, the Venus flytrap can remember the number of prey contacts for at least four hours. Now the researchers want to study the molecular bases of retentivity and learn whether the sensory performance of plants and animals share similar underlying principles.

Funded by the European Research Council

Hedrich's exploration of the Venus flytrap and other carnivorous plants is backed by top-level funding: In 2010, the European Research Council (ERC) allocated him an "Advanced Grant" worth 2.5 million euros for this purpose. Within the scope of the ERC project "Carnivorom", Hedrich's team is on the lookout for those genes that make plants carnivorous. 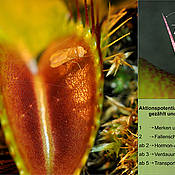