Nominated as „Breakthrough of the Year“

The development of a topological laser network by a team of the Cluster of Excellence ct.qmat is among the top ten nominations for the "Breakthrough of the Year Award“. 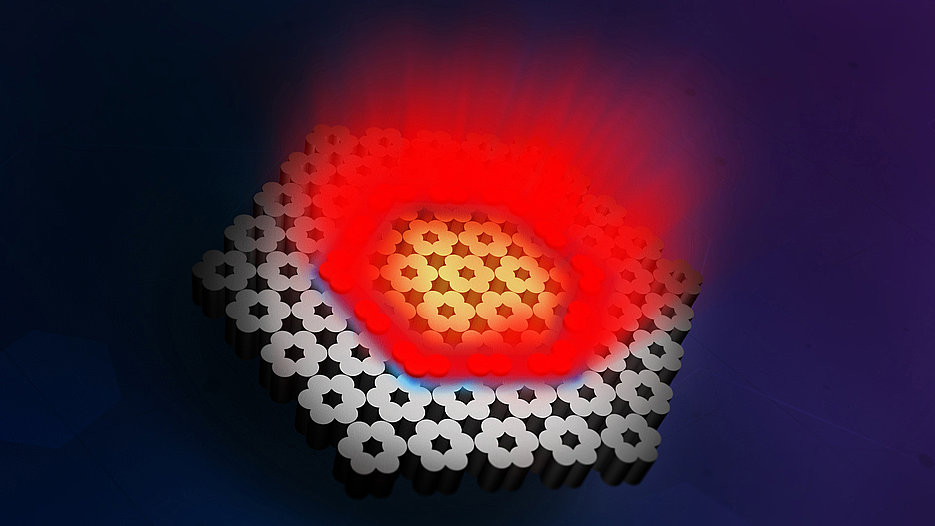 30 surface-emitting microlasers are coupled to form a topological laser. Along a topological interface (blue), they behave as a single laser and emit coherent laser light together (red). Artistic representation. (Image: Pixelwg, Christian Kroneck)

On 24 September 2021, a paper appeared in the scientific journal Science that caused a sensation among experts. Israeli and German researchers from the Würzburg-Dresden Cluster of Excellence ct.qmat presented a new development: a highly effective network of surface-emitting lasers only the size of a grain of sand that act as a single laser.

This set-up can be used to boost the power of microlasers, which are already firmly anchored in mobile phones, fibre-optic networks and other everyday technologies (ct.qmat press release).

The British journal Physics World has now once again ennobled this work. It was nominated as one of ten top publications for the Breakthrough of the Year Award.

According to the journal, the editors previously assessed hundreds of papers it reported on during 2021. The selection was based on several criteria. The papers must represent a significant advance in knowledge or understanding. They must be important for scientific progress and/or the development of real-world applications, and they must be of general interest to physicists.

"We are excited that our work was selected for the top ten," says physics professor Sebastian Klembt from the University of Wuerzburg, the last author of the publication in Science. Shortly after the publication of the paper, his team was delighted to find that Physics World had featured the topic with a website article.

Physics World is the most important journal in the publishing house of the British Institute of Physics (IoP), one of the oldest scientific societies in Europe. "This nomination is a high recognition for the research in our Würzburg-Dresden Cluster of Excellence and demonstrates the internationally outstanding level at which it takes place", says Professor Ralph Claessen, Würzburg spokesman for the Cluster of Excellence ct.qmat, happily.

The Breakthrough of the Year Award 2021 goes to two teams from Finland and Australia, Physics World announced on 14 December 2021.