Physicists study how to achieve perfect absorption of light with the help of rough ultrathin films. 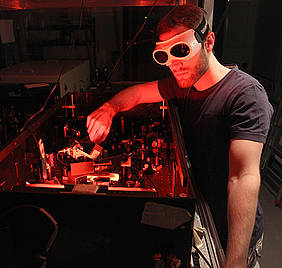 Light-absorbing films can be found in many everyday applications such as solar cells or sensors. They are used to convert light into electrical current or heat. The films literally trap the light. Although such absorber films are applied widely, scientists still do not know which mechanism permits the most efficient absorption of light.

A team of physicists at Bielefeld University, the University of Kaiserslautern, and the Julius Maximilian University of Würzburg (JMU) have now proved that the very efficient scattering of light in ultrathin rough films traps light until it is absorbed completely. The researchers are now (31.08.2015) publishing their findings in the journal Nature Photonics. This research can help to make thin absorber films even more efficient and thereby save energy.

The experiments applied ultrashort light pulses. When such pulses penetrate smooth ultrathin films, they emerge on the other side practically unchanged and scarcely weakened. In rough films, in contrast, irregularities prevent the light pulse from spreading through the material. When there are many irregularities leading to light scattering, the pulse proceeds along a closed path and remains trapped until the light is absorbed.

Two effects enabled the physicists to confirm this light trapping mechanism. First, a small part of the trapped light is scattered out of the absorber layer. By tracking this scattered light intensity over time, it is possible to see directly how long light is trapped in the film.

A second effect delivers information on the spatial localization of the trapped light and the local absorption of energy. The absorption of an ultrashort light pulse excites electrons in the absorber material, heating them up briefly to temperatures of several thousand degrees Celsius – comparable to the temperature on the surface of the sun. At these temperatures, electrons are emitted from the material, as can be confirmed by high-resolution electron microscopy. Measurements show that the light is trapped in small areas with a diameter of less than one micrometre, and this is where it is also absorbed.

The underlying effect of this so-called Anderson localization was already described more than 60 years ago, and it has been observed several times since then.

What is new is that the mechanism also functions for thin absorber layers. ‘This opens up new ways to develop highly efficient absorbers and can therefore contribute to developing improved thin-film solar cells or sensors,’ says Professor Dr. Walter Pfeiffer from Bielefeld University. The idea behind the research is to make thin-film absorbers more efficient so that they can be used in everyday applications.

In future, the researchers aim to study what structure films should have in order to trap light perfectly and to use this to develop a universal concept of efficient light absorption via Anderson localization. 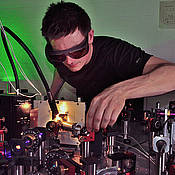 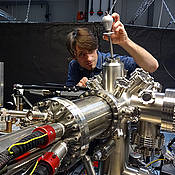