Peptides as tags in fluorescence microscopy

Advance in biomedical imaging: The Biocenter of the University of Würzburg in close collaboration with the University of Copenhagen has developed an alternative approach to fluorescent tagging of proteins. The new probes are practicable and compatible with high-resolution microscopic procedures.

Synapses of brain cells made visible using conventional fluorescence tagging based on antibodies: The pre-synapses (red) and the post-synapses (green) appear slightly out of focus; the synaptic cleft is not fully resolved. (Picture: Franziska Neubert & Sören Doose)

Fluorescence microscopy visualizes the molecular elements of cells. Proteins of nerve cells, for instance, can be labelled using probes which are subsequently excited with light to fluoresce. In the end, the fluorescence signal is used to generate microscopic images of the real position, arrangement and number of proteins.

"It is very difficult to tag the protein in question effectively and specifically," says Professor Markus Sauer from the Chair of Biotechnology and Biophysics of the Julius-Maximilians-Universität Würzburg (JMU) in Bavaria, Germany. Antibodies are often used for this purpose, because they attach firmly and selectively to proteins. "However, this approach returns relatively blurred images, as the antibodies themselves are large proteins."

The drawbacks of antibodies become apparent in neurobiological research – for example when trying to understand the functioning of the brain and the neurons at the molecular level.

Several attempts have been made to visualize the post-synaptic scaffold protein gephyrin using improved tags. "So far, however, the approaches have shown little practical benefit, because they either required genetic manipulation of the cells or were based on antibodies which impair the image resolution due to their size," Sauer explains.

To make progress in this field of research, Sauer's JMU research group teamed up with the University of Copenhagen (Denmark) to pursue an alternative strategy, namely to develop peptide probes. These probes should be much smaller than antibodies but attach to their target proteins with comparable efficiency. The results have been published in the journal "Nature Chemical Biology".

"We have established a technology platform here in Copenhagen which allows us to simultaneously visualize and test a great variety of modified peptides in the size of a microchip. This made it easy for us to design a specific peptide for gephyrin" says Professor Hans Maric from the Center for Biopharmaceuticals. For the peptide to work efficiently as a probe, it was equipped with two other functions: One makes it more membrane permeable, the other imparts fluorescence.

So far, the research team at the University of Würzburg has used the new probes mainly to verify the feasibility of the new approach. The team is pleased with the results: "We believe that it is possible now to develop similar probes for other key proteins," Sauer further.

The JMU professor outlines the possibilities enabled by the new development: "Probes that are highly specific, attach effectively and above all are small hold great potential. They can help shed light on the layout of proteins in their natural cellular context and even allow quantifying them." 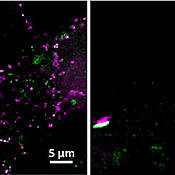