For the first time, physicists have built a unique topological insulator in which optical and electronic excitations hybridize and flow together. They report their discovery in "Nature". 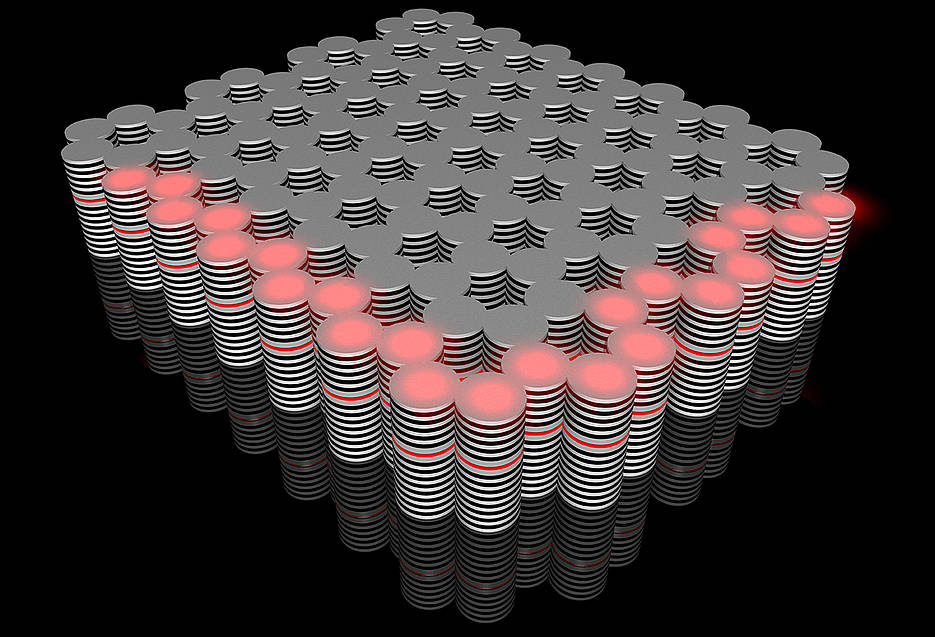 The novel topological insulator built in the Würzburg Institute of Physics: a controllable flow of hybrid optoelectronic particles (red) travels along its edges. (Picture: Karol Winkler)

Topological insulators are materials with very special properties. They conduct electricity or light particles on their surface or edges only but not on the inside. This unusual behaviour could eventually lead to technical innovations which is why topological insulators have been the subject of intense global research for several years.

Physicists of Julius-Maximilians-Universität Würzburg (JMU) in Bavaria, Germany, with colleagues from the Technion in Haifa, Israel, and Nanyang Technological University in Singapore now report their discovery in the journal "Nature". For the first time, the team has successfully built a topological insulator operating with both light and electronic excitations simultaneously, called an “exciton-polariton topological insulator”.

Dr. Sebastian Klembt, group leader at Höfling's chair, played a lead role in the project. He gives more details: The novel topological insulator was built on a microchip and basically consists of the gallium arsenide semiconductor compound. It has a honeycomb structure and is made up of many small pillars, each two micrometres (two millionths of a metre) in diameter.

Propagation direction can be controlled

When exciting this microstructure with laser light, light-matter particles form inside it, exclusively at the edges. The particles then travel along the edges and around the corners with relatively low loss. "A magnetic field enables us to control and reverse the propagation direction of the particles," Klembt says.

It is a sophisticated systems which works in application-oriented dimensions – on a microchip – and in which light can be controlled. Usually, this is not so easy to accomplish: Pure light particles have no electric charge and therefore cannot be readily controlled with electric or magnetic fields. The new topological insulator in contrast is capable of doing this by "sending light around the corner" in a manner of speaking.

This research success of Höfling's team shows once more that the University of Würzburg's Institute of Physics is a leading center of topological insulator research. In 2007, JMU Professor of Physics, Laurens Molenkamp, pioneered the field by experimentally building the world’s first topologically insulator. The Würzburg physicists' excellence in this field was again recognized recently in September 2018 with the awarding of a grant for the Excellence Cluster "Complexity and Topology in Quantum Materials" within the scope of the German "Excellence Strategy" competition.

The Technion scientists have complementary expertise: it is the group of Mordechai (Moti) Segev which has demonstrated the first photonic topological insulator, back in 2013, and launched the field of “Topological Photonics”. The groups have now joined forces to demonstrate this first symbiotic light-matter topological insulator, which holds great promise both as a fundamental discovery and by opening the door for exiting applications in optoelectronics.