A cooperation between the Fraunhofer Society and the University of Würzburg will promote medical research: A centre for stem cell process engineering will be established at the former eye hospital.

On 1 December 2017, the research project titled "Prototype material development for stem cell applications in bioreactors" of the Fraunhofer Society was launched in Würzburg. The project of the Fraunhofer Institutes for Silicate Research ISC (Würzburg) and Biomedical Engineering IBMT (Sulzbach/Saarland) marked the kick-off of the establishment of a facility for stem cell process engineering in Würzburg.

The goal is to set up a project centre at the former eye hospital which has sat empty for years. For this purpose, Julius-Maximilians-Universität Würzburg (JMU) will lease the building to the Fraunhofer Society for the next 30 years with an option for ten more years.

The centre is set to revolutionise the testing of active ingredients for developing new pharmaceutical drugs on an industrial scale. There is still a long way before new active ingredients are available: Potential therapeutic drugs have to be tested for effectiveness and side effects in lengthy procedures. This usually involves animal cell cultures and animal experimentation, however, the results do not reliably predict human outcomes.

Testing systems based on human stem cells that simulate the corresponding organs are considered more reliable. Today, suitable stem cells can be produced from skin cells or other cells of the human body. They have the advantage of evolving exactly into the kinds of cells whose response to the active ingredients the scientists want to test under defined conditions. Moreover, they can be used to grow cell cultures of individual patients to obtain personalised test systems.

"What has been missing so far is a reliable and powerful process technology which is capable of implementing this on a scale relevant for industrial pharmaceutical research. We now want to close this gap," says Professor Heiko Zimmermann, Head of the Fraunhofer IBMT. The institute has been working successfully in the field of stem cell research for more than a decade. It brings essential know-how to the Würzburg project centre for scaling up cell culture and developing efficient differentiation processes.

Würzburg as a site has been chosen on purpose. "With its expertise in biomaterials, the Fraunhofer ISC contributes valuable expertise to producing scaffold structures and contact surfaces needed for cell cultures. Moreover, we provide the first biolabs and the infrastructure to establish an automated production environment at our Würzburg site," explains Professor Gerhard Sextl, the head of ISC.

According to Sextl, the recent integration of the Fraunhofer Translational Center for Regenerative Therapies into the Fraunhofer ISC expands the supporting expertise for biologic medical products. "The establishment of the new research focus of stem cell process engineering at the ISC in close collaboration with JMU is a valuable addition to Würzburg as a research site. The close interdisciplinary cooperation with the medical departments and facilities as well as the life sciences and natural sciences enables the direct transfer of knowledge to develop application-focused, state-of-the-art technologies for handling stem cell cultures and biomaterials," says JMU President Alfred Forchel.

"The future project centre could thus offer an integrated portfolio for the development of application-specific high-throughput production processes for stem cell applications," Professor Zimmermann adds. The new centre also works closely with the two major Bavarian research associations CARE and ForIPS, creating a hitherto unique combination of research and development for bioreactors, tissue engineering scaffolds and novel autonomous cell production in Europe. The goal is to create standardised production processes for stem cell cultures that can be tailored to the specific applications of pharmaceutical research. Julia Neubauer of the Fraunhofer IBMT is the designated manager of the new project centre.

"Closing the gap between the development of personalised test systems for active ingredients in the laboratory on the one hand and their technical application in developing pharmaceutical drugs on the other hand is one of the biggest challenges for the future competitiveness of the pharmaceutical sector," Professor Reimund Neugebauer emphasises; he is the President of the Fraunhofer Society.

With the Project Centre for Stem Cell Process Technology, the Fraunhofer Society has set the goal for itself to provide an integrated solution in this sector in the future. For the recently launched project to build the centre, the project team will receive three million euros worth of funding, half of which is provided by the Free State of Bavaria and by the Fraunhofer Society, respectively.

Restoration of the former eye hospital

The integration of the Fraunhofer Translational Centre for Regenerative Therapies into the Fraunhofer Institute for Silicate Research ISC and the expanded concept of usage and research for stem cell process technology have paved the way for modernising the former eye hospital of the university. The university and the Fraunhofer Society will sign an agreement that will grant Fraunhofer the right to use the building for the next 30 years with an option for ten more years.

The plan to construct an extension to accommodate the seminal research and development operations of the Fraunhofer ISC is set to take off in 2018. In its November meeting, the committee of the government and the federal states responsible for strategic construction measures decided to release the funds for the expansion of the Fraunhofer ISC in Würzburg.

For Würzburg this signals the go-ahead for the long discussed modernisation of the former eye hospital, allowing the landmark building on the Röntgenring research mile to be reconstructed fundamentally after sitting vacant for many years. Also the building will be made fit for scientific use and equipped with the latest in scientific technology. This is made possible by government and federal state funds as well as money from the EU's European Regional Development Fund (EFRE) in the amount of EUR 23 million.

History of the former eye hospital

The building on Röntgenring 12 was built for the eye hospital of the university and opened on 1 May 1901. Hardly damaged during the Second World War, it was temporarily used as accommodation for soldiers. At the end of the war, it was first occupied by US forces, later reused as eye hospital and relocated to the Grombühl district in 1970.

Afterwards, the site on Röntgenring was used by the psychiatric clinic of the university until the early 1980ies. After that time, it sat mostly vacant. Since then, the basement has been redeveloped as a cafeteria of the student union and the adjacent historical lecture hall (Oswald-Külpe-Hörsaal).

The concept for use of the building by the Fraunhofer ISC and its partners has now enabled the Fraunhofer Society to raise funds for the fundamental modernisation and expansion of the historic building into a modern hub of science. "The new centre will be a gem for Würzburg that will soon shine bright again in the building complex at Röntgenring and add a new heavyweight for its health research focus in the field of application-oriented research for medical engineering, biotechnology and pharmaceutical drug development," Sextl is pleased to comment. 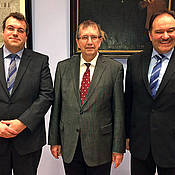 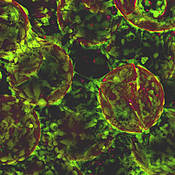