New cause of immune neuropathy discovered

Würzburg neurologists have discovered an antibody that is involved in triggering certain forms of neuropathies. This discovery also allowed them to show a way to treat these diseases successfully. 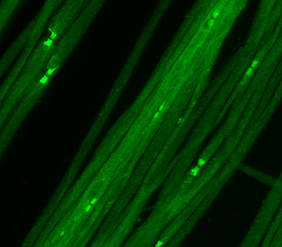 In patients with antibodies against Caspr, the structure of the Nodes of Ranvier is destroyed and nerve function is severely impaired. (Photo: Kathrin Doppler)

Patients suffering from so-called immune-mediated neuropathies frequently have a long medical record. As there are no diagnostic tests available to reliably diagnose the disease, the diagnosis is frequently made belatedly and patients can be misdiagnosed. Accordingly, many years often pass before an effective therapy is started. However, not all patients respond to first-choice drugs even when treated immediately.

An autoimmune process is believed to cause this neuropathy in which the immune system attacks and destroys components of the nerve fibres. "How exactly this mechanism works is largely unknown. This fact obviously makes it more difficult to develop targeted drugs," says Dr. Kathrin Doppler, specialist at the Department of Neurology and Polyclinic of the University of Würzburg.

Kathrin Doppler with Luise Appeltshauser, doctoral student of medicine, and Claudia Sommer, senior consultant and professor of neurology, have now identified a potential trigger of such neuropathies in a new study. They present the results of their research in the current issue of the journal Brain.

"We found that some patients have antibodies against the protein Caspr," Kathrin Doppler outlines the central study result. Caspr is involved in building myelin sheath gaps, the so-called Nodes of Ranvier, a nerve fibre structure crucial to forward nerve impulses. The scientists were able to show that in patients with antibodies against Caspr, the structure of the Nodes of Ranvier is destroyed and nerve function is severely impaired.

In their study, the Würzburg researchers examined 35 patients with chronic inflammatory demyelinating polyneuropathy (CIDP), a chronic form of inflammatory nerve disorder, and 22 patients suffering from Guillain-Barré syndrome, an acute form. In one patient each with CIDP and Guillain-Barré syndrome, antibodies against the protein Caspr were detected in the blood. Moreover, the scientists were able to show that antibody production in these patients can be inhibited by the drug Rituximab which reverses the symptoms.

Even though antibodies for Caspr are found in only a small set of patients, antibody-associated immune neuropathies are probably more common than assumed so far. Caspr is the third protein in this area of the Nodes of Ranvier for which autoantibodies have been identified. In the past years, researchers from Spain and Japan have also identified autoantibodies against two other Nodes of Ranvier proteins, Contactin-1 and Neurofascin-155, in patients with immune-mediated neuropathies.

Hope for a better diagnosis

"Our study backs the assumption from previous studies that patients who have antibodies against proteins of Nodes of Ranvier exhibit characteristic features," says Kathrin Doppler. This means: The disease develops rapidly, causes severe paralysis and responds poorly to standard therapy with corticosteroids or immunoglobulins but excellently to Rituximab treatment. The Würzburg neurologists found that strong neuralgia is another typical symptom in patients with Caspr antibodies. Patients with antibodies against the two other proteins, Neurofascin-155 and Contactin-1, in contrast typically exhibit a distinct tremor in targeted movements.

According to the Würzburg scientists, this study raises hopes of identifying a cause at least in some of the patients suffering from inflammatory neuropathies and that a simple blood test for autoantibodies might help them get targeted treatment.