Fighting haemophilia A, a bleeding disorder, with the body's own cells: That is the goal of a new international research consortium led by scientists from Würzburg. The EU funds the project with around €5.5 million. 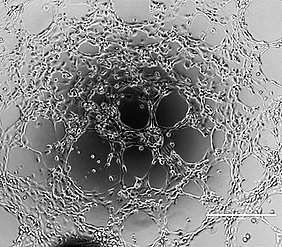 People suffering from haemophilia A have a genetic deficiency in clotting factor VIII which causes increased bleeding. In extreme cases, unstoppable bleeding may occur that can be life-threatening, in particular if the head or brain region is affected. Joint bleeds occur frequently that can cause permanent damage and even destruction of joints when left untreated.

Although effective treatment of the symptoms is available, there is no cure at present. Patients have to get lifelong infusions several times a week to compensate for the missing clotting factor. The costs of treatment for adults vary between €200,000 and 800,000 per year (source: http://www.g-ba.de).

An international research consortium is therefore seeking to develop a novel curative therapy for the disease. Their idea: The patients' own cells are genetically modified outside the body to produce the missing clotting factor using precursor cells of endothelial cells flowing in the bloodstream. Subsequently, these cells are transplanted back into the patient's body in Sernova’s Cell Pouch™ a small implantable device for the survival and function of therapeutic cells.

The Cell Pouch™ is implanted in the abdominal region under the skin and becomes vascularized. The genetically modified cells are then transplanted into the device and are expected to continuously produce the clotting factor and release it into the bloodstream for a long period of time. This should mitigate the disease's impact noticeably, increase the patients' quality of life and reduce the cost of therapy.

Under the name HemAcure, the new research consortium unites companies and scientific institutions from Germany, Italy, the UK and Canada. The project will be funded with around €5.5 million under the European Union's Horizon 2020 programme for the next three years. It is coordinated by Dr. Joris Braspenning, a member of the Department of Tissue Engineering and Regenerative Medicine at the University Hospital of Würzburg.

"HemAcure brings together experts from science and industry in a powerful coalition," Joris Braspenning explains. Their knowledge and skills will allow cell-based medical products that comply with European regulations to be developed more quickly and efficiently. He believes that the project will not only benefit patients suffering from severe forms of haemophilia A, but also promote advanced therapies of the future.

Heike Walles, Head of the Department of Tissue Engineering and Regenerative Medicine, is also convinced of the research project's value as, in her words, "it ideally complements the department's value chain and the Translational Center for Regenerative Therapies in Würzburg.”

Besides the Department of Tissue Engineering and Regenerative Medicine of the Würzburg University Hospital, the following institutions are involved in HemAcure: GABO:mi, a Munich-based enterprise that specialises in the management of EU-funded collaborative research projects, will be in charge of project management. The quality management will be monitored by IMS - Integrierte Management Systeme in Heppenheim, Germany. The company acts as a point of contact for international projects in the pharmaceutical and medical engineering sector.

The Würzburg University Hospital will be responsible for isolating the cells. The entire process will be set up under Good Manufacturing Practices (GMP).

The Università del Piemonte Orientale (Italy) will develop, optimize and perform the gene correction of the patient cells for expression of the Factor VIII therapy. Scientists from Loughborough University (UK) will focus on the manufacturing process and safety testing. Sernova, a Canadian company, will conduct the preclinical safety and efficacy studies with the Factor VIII producing cells in its proprietary Cell Pouch™ using a model of haemophilia developed by consortium partner Universita del Piemonte Orientale (Italy) in preparation for clinical trials.

Horizon 2020 is the biggest EU research and innovation programme ever with nearly €80 billion of funding available over seven years (2014 to 2020). It promises more breakthroughs, discoveries and world firsts by taking great ideas from the lab to the market, for example in the field of personalised medicine providing novel therapies such as gene or cell therapy.