New technologies are needed to combat climate change. Now bioinformatics specialists from Würzburg might have found a way of enabling plants to store more carbon dioxide.

Each year, an average of 120 gigatonnes of carbon dioxide (CO2) worldwide is released through soil and vegetation respiration. Plants are capable of taking in nearly 123 gigatonnes through photosynthesis in the same period. But as humans release another ten gigatonnes of carbon dioxide into this cycle, mainly by burning fossil fuels such as crude oil and natural gas, there are seven gigatonnes of excess CO2. "And these seven gigatonnes are our big problem," says Thomas Dandekar who holds the Chair of Bioinformatics at the University of Würzburg. They fuel global warming and cause global temperatures to rise at an alarming rate.

While searching for a solution to fix this problem, Dandekar and his colleagues believe to have discovered a promising way forward: They are studying plants which are capable of absorbing residual carbon dioxide more effectively thanks to a modified metabolism. The scientists have now published their findings in the current issue of the journal Trends in Biotechnology.

Bioinformatics researchers usually work with mathematical computer models. Over the past months, Thomas Dandekar and his team have been studying whether the metabolic networks of plants can be modulated so as to enable the plants to fix more carbon dioxide. To achieve this, the scientists combined two different methods to modulate the metabolism of the plant cell. By performing complex calculations, they found out that this combination enables plants to absorb five times more carbon dioxide than in the normal state.

Now their theoretical calculations need to be tested in practice. Muhammad Naseem, a colleague of Dandekar, is in charge of conducting these experiments. Born in Pakistan, Naseem has a PhD in molecular biology. He works both in Würzburg and at Zayed University in Abu Dhabi, the capital of the United Arab Emirates where he has been a professor for two years. On 4 January, Naseem returned to Abu Dhabi. He plans to start the practical test there in the course of this year. "We will experiment with tobacco plants and thale cress, also known as Arabidopsis thaliana, which are both easy to modify," the scientist explains.

"If we continue on our current path, climate change will have disastrous consequences," Dandekar warns. The scientist expects that the average temperature could rise by up to four degrees compared to pre-industrial levels. He believes that the next decade must be used to find new ways of removing the carbon dioxide that has already been released into the atmosphere, reducing CO2 emissions and developing strategies to adapt to the consequences of climate change. If successful in practice, the Würzburg research would kill two birds with one stone: Not only do the modulated plants absorb more carbon dioxide, they also deliver higher yields.

According to Thomas Dandekar, the research project funded by the Free State of Bavaria could help large companies offset their carbon dioxide emissions. The bioinformatics expert has the cement industry in mind, for example, which has a massive carbon dioxide problem. Cement production is estimated to be responsible for four to eight percent of global CO2 emissions. Modified diatoms could help reduce these high emissions as the professor explains: "These fast-growing algae could be cultivated directly in the sand pits."

Adapting to a changing climate is currently even more important for countries outside of Europe than for Germany, as Muhammad Naseem explains. The consequences are already clearly noticeable especially in the United Arab Emirates. Based on model forecasts, climate researchers warn that temperatures in the major cities on the Persian Gulf could rise to 50 or even 60 degrees Celsius. Such temperature levels would be unbearable even by Arabian standards. "The big problem is that the United Arab Emirates is among the countries with the highest carbon dioxide emissions per capita in the world," Muhammad Naseem says. He emphasises the urgency of curbing CO2 emissions.

Naseem considers the idea of combining two modulation methods a blessing because it would enable two problems of humanity to be addressed – provided that the computer analyses are congruous with the behaviour of the plants in the field. "The two problems of climate change and feeding the world population are closely connected," says the life scientist. Climate change causes scorched fields, withering plants and complete crop failure due to drought in some regions. Plants with modulated metabolic pathways could not only fix more CO2, they also produce more biomass due to the genetic modification.

Of course, these new research findings are not the only strategy to mitigate climate change. Marine cloud brightening, which involves small, white, low altitude clouds that cool the ocean by reflecting the bright sun-light, or eco-diesel made from carbon dioxide using hydrogen from solar cells are two other promising approaches. "Whichever path or mix of strategies we choose has to be explored carefully for ten years before it is implemented," Dandekar cautions. It is imperative to boost funding of research and critical exploration of active strategies to combat climate change given the worldwide lack of willingness to actually cut carbon emissions. "Otherwise, come 2030, we will be powerless with no means of defending ourselves against the increasingly severe consequences of climate change and carbon dioxide increase." 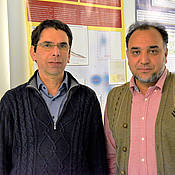