Ants dress the wounds their mates have suffered in battle. Such behaviour is believed to be unique among animals. 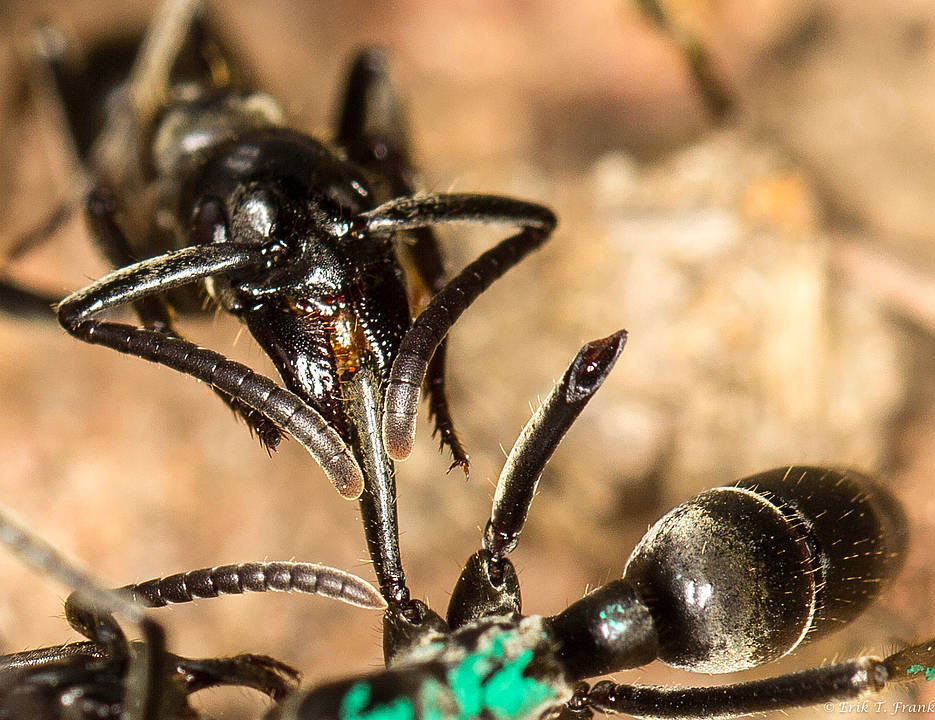 A Matabele ant treats the wounds of a mate whose limbs were bitten off during a fight with termite soldiers. (Photo: Erik T. Frank)

The African Matabele ants (Megaponera analis) tend to the wounds of their injured comrades. And they do so rather successfully: Without such attendance, 80 percent of the injured ants die; after receiving "medical" treatment, only 10 percent succumb to their injuries.

Erik T. Frank, Marten Wehrhahn and Karl Eduard Linsenmair from Julius-Maximilians-Universität Würzburg (JMU) in Bavaria, Germany, made this astonishing discovery. Their results have been published in the journal "Proceedings of the Royal Society B". No other insects are known to dress the wounds of their comrades. The JMU biologists even believe that such behaviour is unique in the entire animal kingdom.

Matabele ants have a high risk of getting injured every day: The insects, which are widely distributed in Sub-Saharan Africa, set out to raid termites two to four times a day. Proceeding in long files of 200 to 600 animals, they raid termites at their foraging sites, killing many workers and hauling the prey back to their nest where they are ultimately eaten.

However, the ants meet fierce resistance from the well-armoured termite soldiers that are very adept at using their powerful jaws to fend off the attackers. Injury and mortality among the ants occur during such combats. For example, the ants frequently lose limbs that are bitten off by termite soldiers. When an ant is injured in a fight, it calls its mates for help by excreting a chemical substance which makes them carry their injured comrade back to the nest. Erik T. Frank already described this rescue service in 2017.

But the Würzburg biologists dug deeper: What happens once the injured ants are back in the nest? The ants treat the open wounds of their injured fellows by "licking" them intensively, often for several minutes. "We suppose that they do this to clean the wounds and maybe even apply antimicrobial substances with their saliva to reduce the risk of bacterial or fungal infection," Frank explains.

Severely injured ants are left behind on the battlefield

The team from the JMU Biocentre uncovered more exciting details about the emergency rescue service of the Matabele ants. Badly injured ants missing five of their six legs, for example, get no help on the battleground. The decision who is saved and who is left behind is made not by the rescuers but by the injured ants themselves.

Slightly injured ants keep still and even pull in their remaining limbs to facilitate transport. Their badly injured counterparts in contrast struggle and lash out wildly. "They simply don't cooperate with the helpers and are left behind as a result," Frank says. So the hopeless cases make sure that no energy is invested in rescuing them.

When Matabele ants are only slightly injured, they move much more slowly than normal once potential helpers are near. This behaviour probably increases their chances of being noticed by the other ants rushing back to the nest in a column. Or it may be that ants can localize the "save-me-substance" more easily in resting ants.

These findings were made at JMU’s Comoé National Park Research Station (Côte d'Ivoire). The new insights give rise to new questions: How do ants recognize where exactly a mate was injured? How do they know when to stop dressing the wounds? Is treatment purely preventive or also therapeutic, after an infection has occurred?

Erik T. Frank will continue to tackle these and other questions at the University of Lausanne in Switzerland – in further cooperation with the JMU researchers. In Lausanne, Frank has been doing postdoc research since February 2018. He recently completed his doctoral thesis at JMU.

Youtube-Video: A Matabele ant treats the wound of a mate