The very first cry of neonates is marked by their maternal language. This seems to be especially apparent in tonal languages, where pitch and pitch fluctuation determine the meaning of words - as a team of scientists led by the University of Würzburg has demonstrated for the first time. 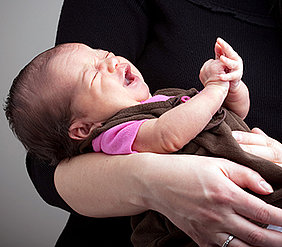 Tonal languages sound rather strange to European ears: in contrast to German, French or English, their meaning is also determined by the pitch at which syllables or words are pronounced. A seemingly identical sound can mean completely different things – depending on whether it is pronounced with high pitch, low pitch or a specific pitch fluctuation.

Tonal languages in China and Africa

One example of such a tonal language is Mandarin. It is China's official language that is spoken predominantly in China, Taiwan and Singapore – by just over one billion people as of now. Four characteristic sounds must be mastered to speak this language. Things are much more complicated with Lamnso, the language of the Nso – a people estimated at 280,000 living mostly in high-altitude villages in the grasslands of Northwest Cameroon, where they practice agriculture. This complex tonal language possesses eight tones, some of which furthermore vary in their contour. This means that whoever wants to speak Lamnso perfectly should not only be able to hit the perfect tone but also to integrate specific pitch fluctuations in certain words.

Now if pregnant women speak such complex tonal languages: does it show in the crying of their newborn infants? This question has now been examined by scientists from different countries in a joint project. The results of their studies have been published in the latest issues of the journals Speech, Language and Hearing and Journal of Voice.

The result: “The crying of neonates whose mothers speak a tonal language is characterized by a significantly higher melodic variation as compared to - for example - German neonates”, says Professor Kathleen Wermke, Head of the Center for Pre-speech Development and Developmental Disorders at the University of Würzburg (Department of Orthodontics) and lead author of the two studies. The infants of the Nso in Cameroon exhibited not only a significantly higher “intra-utterance overall pitch variation” (the interval between the highest and the lowest tone); also, the short-term rise and fall of tones during a cry utterance was more intensive in comparison with the neonates of German-speaking mothers. “Their crying sounds more like chanting”, says Professor Wermke to describe this effect. The results were similar for neonates from Peking – but to a somewhat lesser degree.

Language right from the start

From the scientists' point of view, these findings support a theory that they had already considered to be corroborated by comparisons between German and French neonates: “Building blocks for the development of the future language are acquired from the moment of birth, and not only when infants begin to babble, or to produce their first words”, says the scientist. Having had ample opportunity to become acquainted with their “mother language” in their mother's womb during the last third of pregnancy, neonates exhibit in their crying characteristic melodic patterns influenced by their environment – precisely by the language spoken by their mother –, and that even before they coo their first sounds or try out speech-like “syllabic babbling”.

At the same time, these findings highlight that neonates exhibit a high degree of cross-cultural universality in their crying. “We have examined in this case neonates from very different cultures”, says Kathleen Wermke. On the one hand, there are neonates from Peking, who developed surrounded by all influences of modern civilization – radio, television, smart phone. On the other hand, there are the children of the Nso, who were born in a rural environment where none of the technical achievements of modern times are to be found. “The fact that despite these cultural differences both tonal language groups exhibited similar effects in comparison with the non-tonal German group indicates that our interpretation of data points in the right direction”, explains the scientist.

With all due caution, these results could even suggest that genetic factors are involved in the process in addition to external factors. “Of course, it remains undisputed that neonates are able to learn any language spoken in the world, no matter how complex it is”, says Kathleen Wermke.

A basis for the early diagnosis of disorders

55 neonates from Peking and 21 from Cameroon have been examined by scientists in the course of their studies, and their cry utterances recorded during their first days of life. Of course, no baby was made to cry for the purpose of research. “We only recorded spontaneous utterances, normally when a baby started to fuss because it was hungry”, says Kathleen Wermke.

From the scientists' point of view, the results of these studies contribute to a better understanding of essential influencing factors on the earliest phases of speech development than we have now. At the same time, they improve the possibility to identify early indicators that provide reliable information about any developmental disorders in this field at a very early stage. However, many questions remain to be clarified before these findings can be used in clinical practice.