Toward a new kind of superconductivity: An international team of physicists finds joint appearance of intricate quantum phenomena. 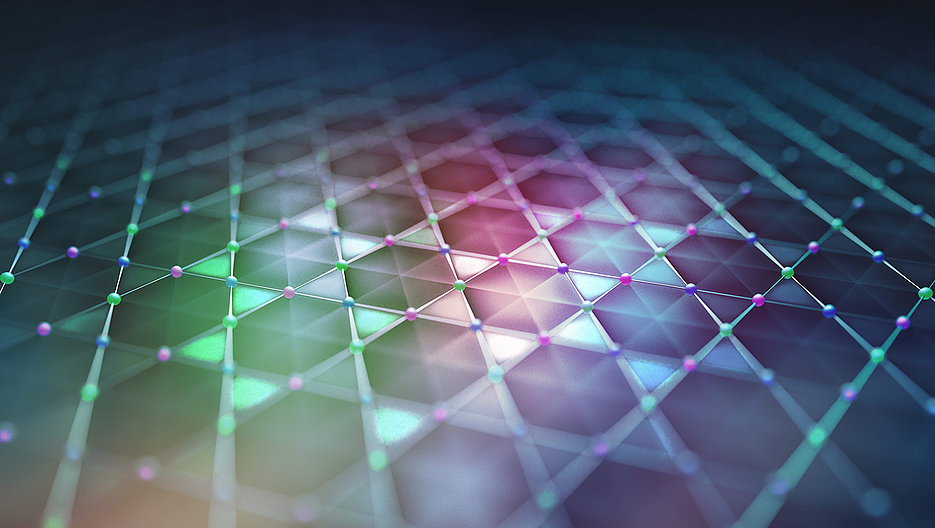 The kagome lattice is composed of three interwoven triangular lattices. For KV3Sb5, each such triangular lattice (denoted red, blue, and green) represent one type of Vanadium sublattice which together form the Kagome metal. The particular kagome lattice structure leads to intriguing quantum effects which yields collective electronic quantum states such as a potentially unprecedented form of superconductivity. (Image: Pixelwg Jörg Bandmann / ct.qmat)

Toward a new kind of superconductivity: In the past four years scientists have discovered metals whose crystal structure mimics that of a traditional Japanese woven bamboo pattern: kagome metals. The international research activity in this new direction of quantum materials has recently reached a new climax: an international team of physicists has discovered that the underlying kagome lattice structure induces the joint appearance of intricate quantum phenomena which can lead to an unpredented type of superconductivity. Ronny Thomale, member of the Würzburg-Dresden Cluster of Excellence ct.qmat, had theoretically predicted related effects in kagome systems 10 years ago. His ideas have contributed to the foundation upon which contemporary experiments on kagome metals are understood and interpreted. A recent milestone in the experimental discovery of exotic superconductivity in kagome metals has now been published in the Nature magazine.

A kagome pattern is composed of three shifted regular triangular lattices. As a result, the kagome lattice is a regular pattern composed of stars of David. It is a common Japanese basket pattern which is where its name derives from. In condensed matter physics, materials crystallizing in a kagome lattice have first gained significant attention in the early 90’s. Until 2018, when FeSn as the first kagome metal was found, correlated electronic states in kagome materials had typically been conceived as being generically insulating, and triggered a predominant research focus on magnetic frustrations. That kagome metals could likewise bring about fascinating quantum effects had already been predicted in 2012 by Ronny Thomale, scientific member of the Würzburg-Dresden Cluster of Excellence ct.qmat – Complexity and Topology in Quantum Matter.

"From the moment of their experimental discovery, kagome metals have unleashed a tremendous amount of research activity. In all dedicated research groups worldwide, the search has begun to look out for kagome metals with exotic properties. Among other ambitions, one hope is to realize a new type of superconductor", explains Thomale who holds the chair for theoretical condensed matter physics at Julius-Maximilians-Universität Würzburg, JMU.

A research team led by the Paul Scherrer Institute (Schweiz) has now achieved a new discoveryin kagome metals. In the compound KV3Sb5, they observed the simultaneous appearance of several intricate quantum phenomena, culminating in a superconducting phase with broken time reversal symmetry.

"Whenever there is an indication of time reversal symmetry breaking in a non-magnetic materialthere must be some exotic new mechanism behind it“, says Thomale. „Only a smallest fraction of known superconductors would allow a distinction between moving ‚forward’ versus ‚backward’ in time. What is particularly astounding is the comparably high temperature far above the superconducting transition temperature at which the experimentally detected signature of time reversal symmetry breaking sets in for KV3Sb5. This has its origin in the electronic charge density wave as the supposed parent state of the superconductor where time-reversal symmetry can already be broken through orbital currents. Their appearance is intricately connected to the kagome lattice effects on the electronic density of states. As soon as there are currents, forward and backward in time attain a concise distinguishable meaning, i.e., the direction of time becomes relevant. This is one central facet underlying the community's tremendous fascination for kagome metals."

The anticipated rise of a new research domain

After the discovery of magnetic Kagome metals in 2018, a non-magnetic kagome metal featuring both, charge density wave order and superconductivity, was first discovered in 2020. The present observation of broken time reversal symmetry within the superconducting phase and above represents a new breakthrough for kagome metals. In particular, these findings provide experimental evidence that an unprecedented type of unconventional superconductivity could be at play.

"The demonstration of this new type of superconductivity in the kagome metals will further fuel the worldwide research boom in quantum physics.", comments Matthias Vojta, the Dresden spokesperson of the research alliance ct.qmat. "The Würzburg-Dresden Cluster of Excellence ct.qmat is one of the leading quantum materials research centers worldwide and ideally equipped to investigate kagome metals with a plethora of different experimental and theoretical techniques. We are particularly proud that our member Ronny Thomale has contributed groundbreaking work in this field."

Professor Ronny Thomale (39) has held the JMU Chair for Theoretical Physics I since October 2016 and is one of the 25 founding members of the ct.qmat Cluster of Excellence. In 2012, he developed – in parallel with the research group of Qianghua Wang of Nanjing University – a theory that is considered the crucial basis for understanding the new experimental results on Kagome metals.

In demonstrating time-reversal symmetry breaking, the hope is to take this new principle of superconductivity possibly found in kagome metals and transcend it into the technologically interesting realm of high temperature superconductors for dissipationless transport of electricity. The recent discoveries in kagome metals will be an incentive for researchers worldwide to take a closer look at this new class of quantum materials. Despite all the excitement, the technically challenging direct measurement of orbital currents in kagome metals is still lacking. If accomplished, this would constitute yet another milestone towards a deeper understanding of the way electrons conspire on the kagome lattice to give rise to exotic quantum phenomena.

The Cluster of Excellence ct.qmat–Complexity and Topology in Quantum Matter is a joint research collaboration by Julius-Maximilians-Universität Würzburg and Technische Universität (TU) Dresden since 2019. More than 270 scientists from 34 countries and four continents perform research on topological quantum materials that reveal surprising phenomena under extreme conditions such as ultra-low temperatures, high pressures, or strong magnetic fields. If it becomes possible to exploit these unusual properties under ambient conditions, they will serve as a foundation for revolutionary quantum chips and new types of technological applications. The Cluster of Excellence is funded within Excellence Strategy of the federal and state governments–as the only cluster in Germany that traverses federal state boundaries. 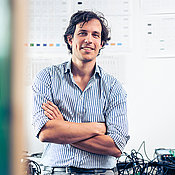