How do canopy insects react to the sudden disappearance of their host tree? A study in the floodplain forests along the river Elbe shows surprising results. 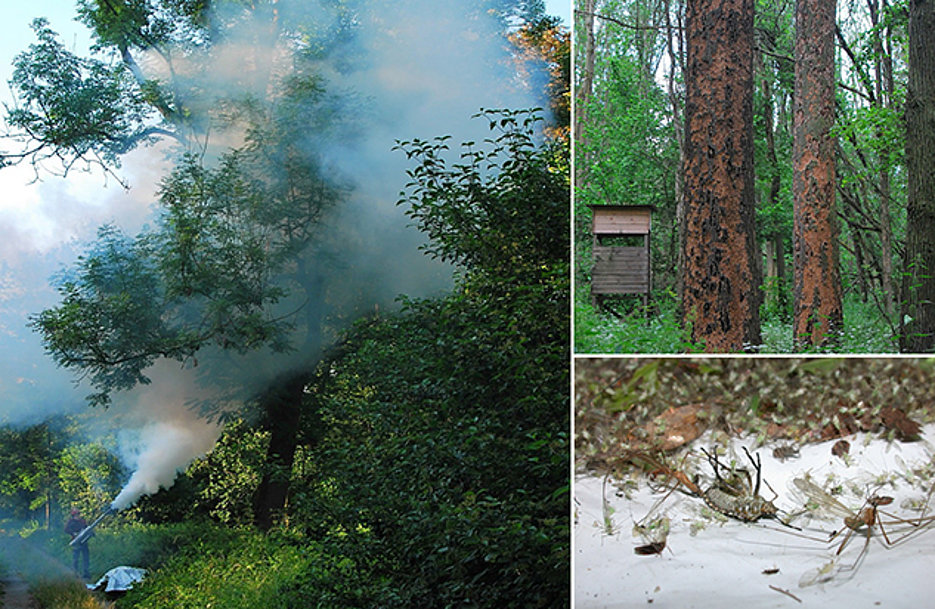 With the fogging method, insects and other invertebrates can be collected almost completely from tree crowns. All arthropods that are affected by the insecticide drop into the collecting sheets and are collected for identification. Top right: As a result of drought and ash dieback, most F. excelsior trees had died in 2020. Following a mass development of the ash bark beetle Hylesinus fraxini (Curculionidae, Scolytinae), woodpeckers subsequently destroyed the bark of dead F. excelsior trees. This gives the dead trunks their distinctive structure. (Image: Andreas Floren / Universität Würzburg)

As a result of the droughts of recent years, a pronounced tree mortality has been observed in Germany, which has left clearly visible gaps in forests and parks. All climate projections indicate that such events will occur more frequently in the future.

This also affects insects and other animals in the canopy, which harbour a large proportion of biodiversity and perform many functions without which no forest can exist.

In response to tree mortality, forest scientists plan to convert commercial forests to more robust mixed forests, which includes the planting of drought-resistant tree species from other countries.

But this strategy carries risks and is controversial: If plants or animals are introduced into regions where they are not native, this can disrupt ecosystems, their biodiversity and function. "The nature and extent of such disturbances cannot be predicted on the basis of current knowledge." This is what scientists Andreas Floren and Tobias Müller from the Ecology and Bioinformatics Departments of Julius-Maximilians-Universität Würzburg (JMU) report in the scientific journal Sustainability together with Peter Horchler from the Federal Office of Hydrology in Koblenz.

The researchers show that non-native trees can also provide opportunities in times of climate change by becoming rescue species for insects when their host trees die locally.

Evidence for this was found in the floodplain forests of the Midlde Elbe Biosphere Reserve in Germany where the Red-Ash (Fraxinus pennsylvanica) is found in the vicinity of European Ash (Fraxinus excelsior). F. pennslyvanica was planted there at the beginning of the 20th century because of their high flood tolerance.

"In 2016 and 2017, we analyzed the biodiversity of the beetles in the crowns of the two tree species," explains Andreas Floren from the JMU Systems Ecology working group, which combines animal ecology and bioinformatics. The results showed that the greatest beetle diversity was found on the European Ash trees differing clearly from the beetle communities of the Red-Ash trees.

According to Floren, ash dieback caused by drought stress and fungal infections was not evident 2016/2017. But in 2020, when the team repeated the analyses, the situation was completely different: by then, more than 80 per cent of the native ash trees had died - which is close to a "knock-out" of this tree species. The heat and drought of past years had taken their toll. The North American ash trees, on the other hand, were little affected.

The beetle fauna in the trees had changed dramatically in 2020. "This indicates a functional restructuring of the ecosystem", Floren explains. Many species had switched to the Red-Ash, and several endangered, red-listed beetle species of Saxony-Anhalt had increased in numbers and became secondary pests on F. excelsior. These beetles bore into the bark of the native Ash trees and destroy their bast layer.

Surprisingly, herbivorous beetles were absent in all trees. In contrast, more wood-dwelling and wood-feeding beetles were collected. Predatory beetles and those that feed on fungi were now collected in larger numbers on Red-Ash trees.

The data were obtained by fogging individual trees with a highly specific insecticide; beetles and other insects drop into collecting sheets installed beneath the tree and are collected for identification. Natural pyrethrum was used as an insecticide which is destroyed in sun light within hours without leaving any residues, so that the disturbance to the ecosystem remains low.

"All in all, our data suggest that F. pennsylvanica could become a rescue species for the native fauna if the European Ash disappears because Red-Ash provides the second-best habitat," says Floren. "That neophytes become important for the preservation of native fauna is very unusual and only possible because the two ash species are closely related."

In biology, neophytes are plants that have been introduced to non-native sites by human activities. More research is now needed on the diversity and function of the tree canopy fauna including neophytes to be prepared for possible consequences of climate change, because what has happened in the floodplain forests might become happen to other forests.