The super-energetic jets that shoot out of black holes are in the focus of a new DFG research group. The researchers are being funded with 3.6 million euros. 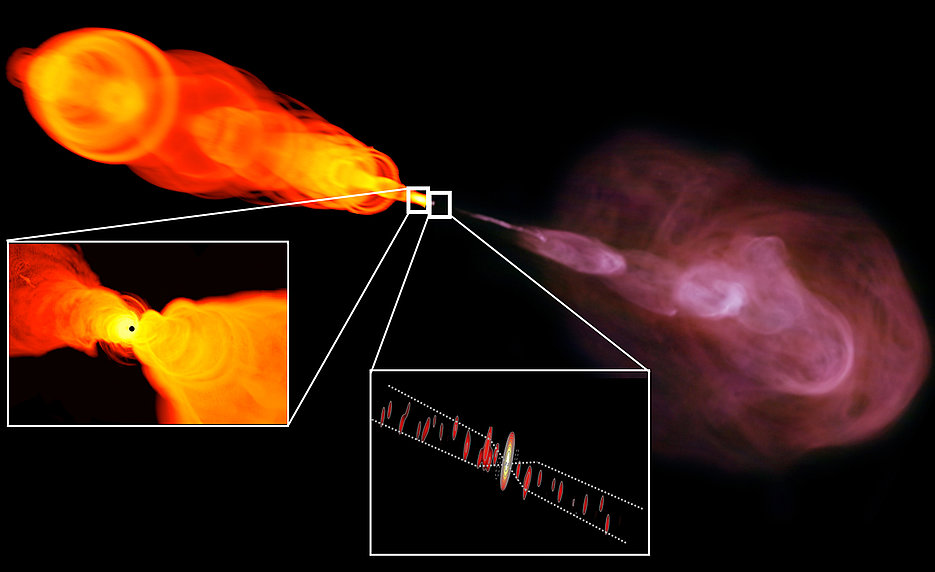 Black holes are found at the centre of almost all galaxies that have been studied so far. They have an unimaginably large mass and therefore attract matter, gas and even light. Only recently, astronomical images showing the accumulation of matter onto a supermassive black hole have caused public excitement.

Such black holes can release immense energy, originally stored in their rotation or the potential energy of collected matter, into the environment. They do this in the form of jets.

Jets are collimated beams of plasma that accelerate particles to tremendous energies and eject them from the centre of the galaxy at nearly the speed of light. Such jets can reach several hundred thousand light years into space and emit bright radio, X-ray and gamma-ray radiation.

Many mysteries remain to be solved

Jets still pose many riddles to science: What are they made of? How are they launched in the immediate vicinity of supermassive black holes? What processes are responsible for their high-energy radiation, and what interactions are there with the parent galaxy?

Such questions are to be clarified in the new research group "Relativistic Jets in Active Galaxies" – with the help of theory, modelling, observation and interpretation.

Matthias Kadler is the spokesperson

The German Research Foundation (DFG) will fund the group with 3.6 million euros over the next four years (with the possibility of continuation in a second funding phase for another four years). The group's spokesperson is astrophysics professor Matthias Kadler from Julius-Maximilians-Universität (JMU) Würzburg in Bavaria, Germany.

In addition to Professor Kadler, Professor Karl Mannheim, Junior Professor Sara Buson and Dr Christian Fromm are also involved at JMU. Other projects are located at the universities of Hamburg, Heidelberg, Erlangen-Nuremberg, at the Leibniz Institute for Astrophysics in Potsdam and at the Max Planck Institutes for Astronomy and Radio Astronomy in Heidelberg and Bonn.

The researchers have set themselves the ambitious goal of developing a concordance model of jets. This is to be achieved by overcoming the historically evolved divisions between different scientific approaches to the problem, for example by coordinating observations and theoretical modelling more closely than before.

"Impressive breakthroughs in observational astronomy and astroparticle physics in recent years have brought jets even further into the focus of modern research," explains Matthias Kadler. "At the same time, theoretical and numerical modelling have made enormous progress. In our research group, this is brought together for the first time in this form and breadth."

DFG research groups are designed to enable scientists to address current issues in their fields and establish innovative lines of work. The funds provided by the DFG will largely be used to create project positions for young researchers.