Using a revolutionary live-cell microscopy technique, an international team of scientist has observed for the first time individual receptors for hormones and widely used drugs at work in intact cells.

Simultaneous visualization and tracking of individual receptors (green) and G proteins (magenta) at the surface of a living cell. The receptors and G proteins undergo transient interactions, which occur preferentially at “hot spots” on the cell membrane. (Photo: Team Calebiro)

G protein-coupled receptors (GPCRs) are among the "hottest” targets for the therapy of diseases such as hypertension, asthma or Parkinson´s. These receptors are the site of action of many hormones and neurotransmitters and allow them to regulate the activity of our cells. As a result, around half of all currently prescribed drugs are targeting these receptors to treat several widespread diseases.

As their name suggests, these receptors have to “find” and interact with so-called G proteins on the cell membrane in order to initiate and regulate intracellular processes. How and where this happens has long been the subject of numerous hypotheses, which, however, could never be confirmed. An international team of scientists from the Universities of Würzburg, Birmingham and Wroclaw has now succeeded for the first time to directly observe and investigate the initial contacts between individual receptors and G proteins and the following events taking place at the surface of living cells.

"We were able to show that receptors and G proteins preferentially meet at special sites on the cell membrane, which we call hot spots", explains Professor Davide Calebiro, the senior author of the study, which has just appeared in the prestigious scientific journal Nature. Prof. Calebiro is working at the Institute of Pharmacology and Toxicology and at the Bio-Imaging Center of the University of Würzburg as well as at the Center of Membrane Proteins and Receptors of the Universities of Birmingham and Nottingham.

These detailed observations at the cell membrane of living cells were made possible by the use of a highly sophisticated method based on single-molecule microscopy. The authors also observed that receptors and G proteins usually remain associated only for a short time. Indeed, most interactions terminated after just one second. Furthermore, the researchers found that the cytoskeleton underneath the cell membrane plays an important role in the formation of the hot spots. The existence of these hot spots for receptor signaling was hitherto unknown.

Davide Calebiro and his co-authors are convinced that the hot spots exert an important influence on receptor signaling by increasing both the speed and efficiency of G protein activation. At the same time, they allow the resulting signals to stay local.  According to the scientists, their new findings show that "apparently simple biological processes can be highly sophisticated once observed from a short distance". They anticipate that the current “exceptional advances” in imaging techniques will lead to a much deeper understanding of these processes in the near future.

According to the authors, the newly gained insights provide the opportunity for new therapeutic approaches. "Currently used drugs can only either activate or block the receptors," explains Davide Calebiro. In the future, it might be possible to influence these processes much more precisely - for example by manipulating the mobility of receptors and G proteins on the cell membrane or their interactions at the hot spots.

This study was supported by the Deutsche Forschungsgemeinschaft (DFG).

A video showing these processes, you can see here: https://youtu.be/7vsc9DnGhsM 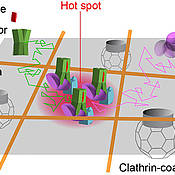 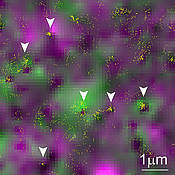