In tune with the moon

Does the moon affect women's menstrual cycles? This question has been controversial for a long time. A new study by chronobiologists from Würzburg now suggest that such an influence does exist. It's complicated, though. 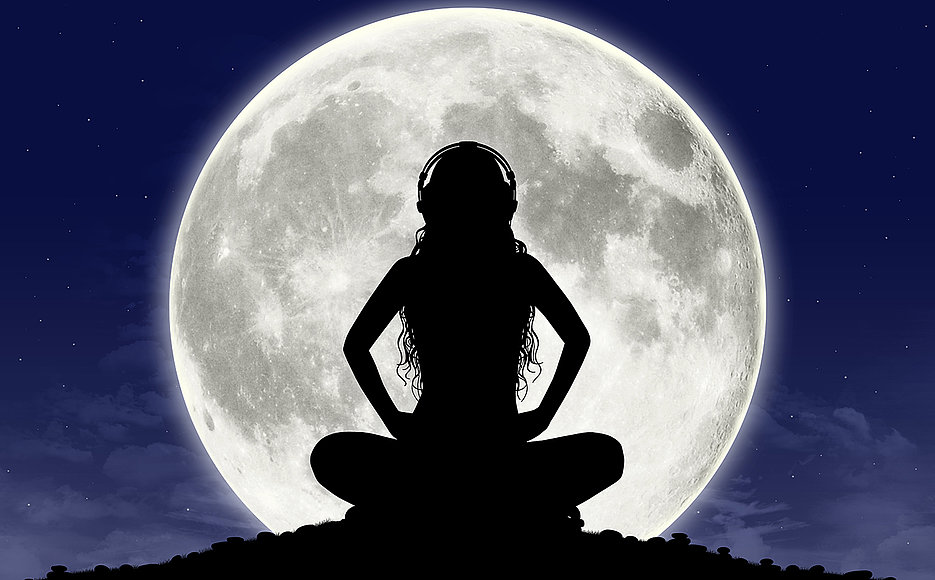 The blog "Ladyplanet. Natürlich Frau sein" is quite certain: "Our cycle is linked to that of the moon. The most obvious connection is the length of the two cycles," it says. The newspaper "Berliner Tagesspiegel" comes to the opposite conclusion: "The length of women's menstrual cycles is an average value, for some it lasts longer, for others it is shorter. Even one and the same woman can have cycles of different lengths. If they really were connected to the lunar cycle, all women would have their fertile days at the same time," the paper's knowledge section reads.

So what is true? A team led by Würzburg chronobiologist Charlotte Förster has now used scientific methods to examine the connection between lunar and women's menstrual cycles. The result: The scientists hypothesize that in ancient times human reproductive behavior and the female menstrual cycle were synchronous with the moon but that our modern lifestyles and artificial light have largely changed this synchrony. Förster holds the Chair of Neurobiology and Genetics at the University of Würzburg (JMU). The results of her study have now been published online in the journal Science Advances.

"We know many animal species in which the reproductive behavior is synchronized with the lunar cycle to increase reproductive success," says Charlotte Förster. Since the menstrual cycle of women is similar in length to the lunar cycle with its approximately 29.5 days, a connection seems likely. This is also supported by a number of other findings: For example, several older studies show that women whose cycles are in sync with that of the moon have the highest probability of becoming pregnant. Two large longitudinal studies demonstrate a significant correlation between birth rate and lunar phase with a slight increase in birth rate at full moon and a corresponding decrease at new moon. Recent evidence also suggests that births are more likely to occur at night during a full moon and during the day when there is a new moon.

To clarify the influence of the moon on human reproduction, Förster and her colleagues from Munich, Buenos Aires and the USA studied the course of the menstrual cycles of 22 women who had kept menstrual diaries – in some cases over a period of 32 years. "To our knowledge, this approach to analysing this type of long-term data has not been used before," Förster says. Instead, previous studies had analyzed large numbers of women in their entirety, combining results from different women, age groups, years, and seasons.

The team correlated the records of each of the 22 women with the lunar cycle. Whereas "lunar cycle" is actually an unacceptable simplification. "Scientifically speaking, the moon exhibits three distinct cycles that periodically change its luminance and the gravity with which it impacts Earth," Förster says. On the one hand, there is the change between full moon and new moon which takes place on average every 29.53 days with slight variations. Secondly, the moon does not go round Earth in a fixed orbit. Instead, its position varies relative to the equator. Sometimes it is more to the north, sometimes more to the south. This cycle lasts 27.32 days. The third cycle is a little longer with an average of 27.55 days. It results from the fact that the moon accompanies Earth on an elliptical orbit and is accordingly sometimes closer, sometimes further away.

All of these cycles affect the intensity of the moonlight and gravity, which can be seen in the tides, for example. In addition, they interact with each other and can lead to special constellations at longer intervals, producing special phenomena, such as a solar eclipse, which is part of a regular cycle where the darkening of the sun repeats about every 18 years.

Moonlight is the strongest clock generator

"All three lunar cycles influence the onset of menstruation in women": This is the conclusion the scientists draw after evaluating the records of the study participants. The nightly moonlight seems to be the strongest clock synchronizer, but the gravitational forces of the moon also contribute to the effect.

Of course: Not all women follow the change of light and dark in the night sky and if they do, usually only for certain periods of time. On average, in women under 35 years of age, menstruation occurs synchronously with the full moon or new moon in just under a quarter of the recorded time. For women over 35, this is the case on average in barely one tenth of the time. The synchronism of lunar and menstrual cycle does not only decrease with increasing age: It also seems to decrease to the extent that women are exposed to artificial light sources at night. Typical "night owls", who go to bed late and leave the lights on longer, show no obvious synchronisation with the moon.

A sense of gravity

According to the scientists, the fact that synchronisation occurs only sporadically and that the courses of women's menstrual cycles varies suggests that the moon's light-dark cycle alone is not a strong synchronizing factor of menstruation. They have the first evidence that gravity also influences the monthly cycles. "In the second halves of 1961, 1979, 1997 and 2015, the menstrual cycles of seven out of nine women were synchronous with the change of full moon and new moon," says Charlotte Förster. This interval of 18 years corresponds exactly to the rhythm in which the three lunar cycles combine to produce very special constellations. This conjunction may have enhanced the moon's strength as a clock generator.

The observation that gravity sets a rhythm for humans could explain why certain cycles, such as menstruation but also sleep onset and sleep duration, are temporarily linked to either the full moon or the new moon: In both phases the influence of the moon's gravity on Earth is similar. Effects of gravity could also explain a study's observation that both sleep onset and sleep duration of college students are in sync with the lunar cycle – even though they live in Seattle, a city that is so bright at night that moonlight is barely perceptible.

For Förster and her colleagues, all these observations suggest that the human organism can respond not only to rapid changes in gravity, as perceived by the equilibrium system, but also to slow, periodically recurring gravitational changes. However, the scientists are aware of the limited significance of their study due to the relatively small number of women studied. Her hopes are therefore pinned on the use of technology that is both simple and modern: a mobile phone app. This will make it possible to study the relationship between menstrual and lunar cycles and the influence of artificial light on a large number of women around the world.