Plants rely on bees for pollination; bees need plants to supply nectar and pollen. Scientists from the University of Würzburg have studied how climate change affects these mutualistic interactions.

Global warming can disrupt the mutualistic interactions of plants and pollinators as in the case of the European orchard bee, the red mason bee and the pasque flower. (Image: Universität Würzburg / Sandra Kehrberger)

Higher mean temperatures as associated with climate change can have a severe impact on plants and animals by disrupting their mutually beneficial relationship: The pasque flower (Pulsatilla vulgaris), for example, is very sensitive to rising temperatures by flowering earlier each year, whereas one of its major pollinators, a solitary bee species, does not quite keep pace by hatching earlier. In the worst case, this may cause the seed production of the plant to decrease and impair reproduction while requiring the bee to switch to other plants to forage on to compensate for the lack of food supply.

This is the key finding of a new study conducted by scientists from the University of Würzburg which has been published in the journal Plos One. Dr. Andrea Holzschuh from the Department of Animal Ecology and Tropical Biology (Zoology III) and PhD student, Sandra Kehrberger, were in charge of the study.

The times of flowering and hatching must coincide

"We studied the impact of temperature on two solitary bee species that emerge in spring and on Pulsatilla vulgaris, one of the earliest flowering plants," Sandra Kehrberger describes their experiment. The scientists were particularly interested in how different temperatures in winter and spring affect the hatching time of the European orchard bee (Osmia cornuta) and of the red mason bee (Osmia bicornis) as well as the onset of flowering in the pasque flower.

The phenological synchrony of the two events, hatching and flowering, is crucial in the life of both plant and bee: "For solitary bees, it is all about the correct timing of hatching in spring when the growing season starts since already a short period of time without flowering plants that provide food can have negative consequences for the bees' survival and the number of offspring," Andrea Holzschuh explains. But the timely onset of flowering is also essential for plant species that flower at the beginning of the growing season and rely on solitary pollinators. "A lack of pollinators can have serious consequences for the plants and their reproductive success," Sandra Kehrberger adds.

For their study, the scientists placed bee cocoons on eleven grassland sites in the Würzburg area. On seven grasslands, they additionally studied the effect of temperature on the onset of flowering in the pasque flower. "Because the surface temperatures of the respective grasslands were different, we were able to investigate the impact of higher temperatures as an effect of climate change on the onset of flowering in Pulsatilla vulgaris and on the hatching of the mason bees," Kehrberger says.

The result was clear: As the temperatures increased, the pasque flower started to flower earlier. The emergence of the two solitary bee species lagged somewhat behind. This poses the risk that the first flowers of the pasque flower bloom in the absence of suitable pollinators. As a result, reduced viability and reproductive success could negatively affect the population size and even push a species to extinction in the long run. Climate change thus presents another risk for the native red-list species Pulsatilla vulgaris. However, this temporal mismatch can also endanger the solitary bees due to the reduced availability of nectar and pollen.

"Our research shows that climate change also threatens domestic plants and solitary bee species which are already under great pressure from habitat loss and intensive agriculture," Sandra Kehrberger concludes. The two scientists want to use their research results to demonstrate the scope of the threat. They hope that their findings will help to better estimate the possible consequences of climate change on plant-pollinator interactions and highlight the importance of limiting global warming to a minimum.

There are more than 550 solitary bee species in Germany. Unlike honey bees, most of them are not social and do not live in colonies. Rather, each female constructs its own nest and provides it with nectar and pollen to feed the larvae. Both solitary bees and plants rely on temperature to indicate the right time to flower and hatch, respectively, thereby synchronising their emergence. Global warming causes many plant and animal species to emerge earlier – although not necessarily in synchrony. 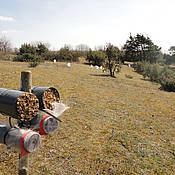