The University of Würzburg has two new space projects in the pipeline which are concerned with the observation of planets and autonomous fault correction aboard satellites. The German Federal Ministry of Economic Affairs and Energy funds the projects with around 1.6 million euros. 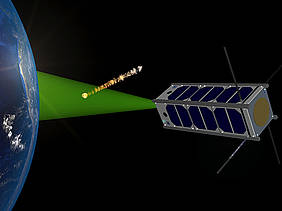 An autonomous nanosatellite detects a meteor and autonomously decides what to do next: That is the research focus of the Würzburg aerospace engineers. (Graphic: Hakan Kayal)

Detecting tornadoes that sweep across Mars. Discovering meteors that fall to Earth. Investigating strange lightning that flashes from Earth's atmosphere into space. Exploring mysterious light phenomena on the moon.

These are just a few examples of unpredictable events taking place on Earth or other planets. Observing such events with satellites requires special, highly autonomous technologies. That is the focus of Professor Hakan Kayal's team at the Julius-Maximilians-Universität Würzburg (JMU) in Bavaria, Germany.

The Würzburg aerospace engineers have a plan: In future, nanosatellites, measuring around 10x10x30 cm, could permanently patrol the orbit of Earth or other planets with running cameras. When they encounter strange phenomena, they would have to decide autonomously what to do next: Just send a picture to Earth? Or is it worth observing the phenomenon and realign the camera?

Autonomous target planning is a challenge

"It is extremely challenging to put such an autonomous target planning system into practice. So far, the technology hasn't been available for nanosatellites," says Professor Kayal. According to Kayal, however, the technology is crucial for interplanetary missions, because communication with ground control takes too long. For instance, it can take 20 minutes for a satellite to send a radio message from Mars to Earth. Until it has been decided what the satellite should do, the interesting event on Mars may already be gone.

For such missions, Kayal's team has developed ASAP, an autonomous sensor and planning system for small satellites. Its key components are to be tested in space for the first time now: The Würzburg scientists are adapting the system to SONATE, a nanosatellite set to be launched into Earth's orbit in 2019.

The SONATE mission is sponsored by the German Aerospace Center (Deutsches Zentrum für Luft- und Raumfahrt - DLR) with funds from the German Federal Ministry of Economic Affairs and Energy. The sponsors will contribute around 1.3 million euros to the project over the next four years. Besides the ASAP system, the nanosatellite will take another novelty into orbit: ADIA/ADIA++, an automatic diagnostics system for satellites, developed by Kayal's team in cooperation with computer scientist Professor Frank Puppe from Würzburg.

"We want to use ADIA to autonomously predict potential faults and malfunctions on board satellites, find the root cause and handle it more efficiently," the professors explain. At present, troubleshooting is performed via remote control from Earth. By accelerating this process, many damages or even total losses might be avoided in future.

When testing the system during the SONATE mission, the Würzburg computer scientists will produce several faults on board the nanosatellite. Whether ADIA will be capable of recognising what is normal and what is faulty aboard the satellite remains to be seen.

Students involved in the research

Students of aerospace programmes at the University of Würzburg will have the chance to work on the SONATE project in the next four years: either as assistants or within the scope of master or bachelor theses. Professor Kayal also incorporates the topic in his lectures and seminars to create close ties between academia and state-of-the-art research.

NACOMI is another project that is open to students. Equally funded by the DLR with 310,000 euros from the German Federal Ministry of Economic Affairs and Energy, its focus is on developing communication technologies for nanosatellites that are on their way to other planets. The harsh space radiation is a major challenge in this context. Cosmic rays in the interplanetary space are much stronger than on an Earth orbit where the Earth's magnetic field has a protective effect.

The project is also supported by the industry. For the time being, the tests are conducted on Earth, namely in the laboratories of the Würzburg computer science department. The ultimate goal is to develop a prototype in 2018 that may get the chance to prove itself in space in a potential follow-up project.

Kayal's team is working at the front line of this project, too. "NASA is presently running a similar project, but apart from that the development in this field is in its early stages. If we complete this project successfully, Germany will benefit as a technology centre," Kayal says.

The German Federal Ministry of Economic Affairs and Energy supports the projects based on a decision by the Bundestag under funding code 50RM1606 (SONATE), 50RM1231 (ADIA/ADIA++) and 50YB1608 (NACOMI).

Aviation and Space Information Technology (Bachelor) at the JMU

Master in Space Science and Technology at the JMU 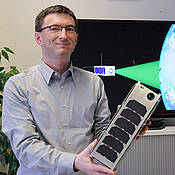