The association "Hilfe im Kampf gegen Krebs e.V." (help in the fight against cancer) has set up a foundation to promote cancer research at the University of Würzburg.

"Our goal and motivation is to build capital and support to continue to fight cancer in the long term after the successful crowdfunding project", said Gabriele Nelkenstock, chairwoman of "Hilfe im Kampf gegen Krebs" and initiator of the foundation set up under the umbrella of Sparkasse Mainfranken.

The foundation is a special type of trust where the donors decide what happens with their money: They either donate for a specific purpose or into the foundation's capital reserve. "For us it is important that it is a kind of 'civic' foundation which is supported by the citizens and that the association continues to exist, too," Nelkenstock said. The association will continue to deal mostly with requests from patients and relatives, for example by providing accommodation for relatives at the clinic.

The association has already provided comprehensive support to the researchers at the university and the hospital in the past years, but starting a foundation has one major organisational advantage: Association donations have to be "spent" within two years, whereas a foundation has more freedom in spending its means and is therefore capable of supporting long-term projects.

According to Gabriele Nelkenstock, the foundation is also set to strengthen Würzburg as a research site. University President, Alfred Forchel, added: "This allows us to deepen and expand seminal and promising approaches in cancer research at the University of Würzburg."

Oliver Jörg (CSU), Member of the Bavarian Parliament, said: "There are many foundations for cultural purposes. It is great that Würzburg has developed an affinity to support research.

Barbara Stamm, the President of the Bavarian Parliament, who has sponsored various projects of the association for many years, also supports the "Forschung hilft" foundation. Having visited children's hospices in her role as a politician, she recognises the importance of pushing cancer research: "Parents ask one question over and over again: 'There must be something that can be done'." The researchers at the University of Würzburg now have more freedom in pursuing promising approaches more intensively – also in the case of rare diseases.

Matthias Frosch, Dean of the Medial Faculty, confirms this: "In particular, the innovative approach to get the patients' own immune system to fight the cancer cells holds the most promise." Of course, it will be thoroughly checked for which purposes the foundation uses its money.

Alfred Forchel thanked the association and its honorary president in particular: "The university thanks the association 'Hilfe im Kampf gegen Krebs', headed by Ms Nelkenstock, and Barbara Stamm, the President of the Bavarian Parliament, for their personal support and commitment."

The foundation advisory board consists of different active supporters. It comprises merchants from the region, employees, self-employed persons and people from various areas of society.

The work of "Forschung hilft" can now be supported with donations to the following bank account: Stiftergemeinschaft der Sparkasse Mainfranken Würzburg, IBAN DE19 7905 0000 0000 0655 65, BIC: BYLADEM1SWU. The foundation to promote cancer research at the University of Würzburg is held in trust by DT Deutsche Stiftungstreuhand AG, Fürth as a subfoundation inside the dependent foundation "Stiftergemeinschaft der Sparkasse Mainfranken".

Until the foundation's website is complete, information is available at: https://www.helpingisbeautiful.de/ or www.kampfgegenkrebs.de 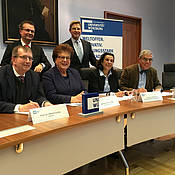 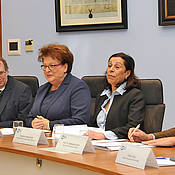 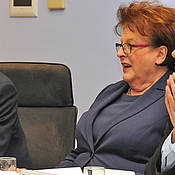 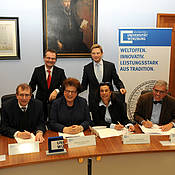