Adriana Pálffy-Buß has been appointed to the new W2 professorship for Theoretical Quantum Information and Quantum Optics of the Cluster of Excellence ct.qmat. She is an expert in the new research field of X-ray quantum optics. 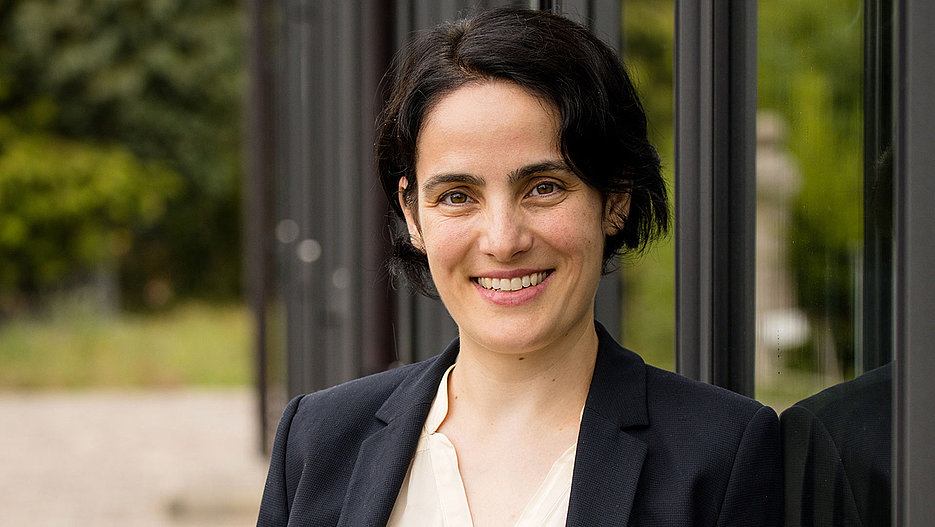 Adriana Pálffy-Buß has been appointed to the new established W2 professorship for Theoretical Quantum Information and Quantum Optics (Image: Bilderstolz)

Adriana Pálffy-Buß has been appointed to the new W2 professorship for Theoretical Quantum Information and Quantum Optics of the Cluster of Excellence ct.qmat - Complexity and Topology in Quantum Matter. The professorship was newly established at Julius-Maximilians-Universität (JMU) Würzburg. Pálffy-Buß is an expert in the new research field of X-ray quantum optics, which uses extremely short-wave X-ray radiation instead of visible light to study the tiniest particles. This could become relevant for non-destructive imaging techniques and makes a decisive contribution to basic research in quantum physics. To highlight the importance of quantum physics and technologies, the first global World Quantum Day will be celebrated on 14 April 2022.

Until now, digital information has been transmitted by comparatively slow electrons flowing in semiconductors. A research approach of the Cluster of Excellence ct.qmat is dedicated to the possibility of using much faster photons - i.e. light particles - instead. So far, the Würzburg quantum optics experts of ct.qmat have focused on the interaction of light and electrons. Electrons are small particles that form the shell of atomic nuclei. In information transmission, every material - whether chip, internet cable or sensor - in turn consists of regularly arranged atoms, the "atomic lattice". For their experiments, the researchers use visible light with wavelengths between 0.4 and 0.8 micrometers. The quantum effects that result from the interaction between the photons and these materials or their atomic lattices are the focus of interest of the Würzburg-Dresden Cluster of Excellence ct.qmat.

"I am pleased that we can expand the research area of quantum optics in Würzburg into the field of X-ray physics together with Adriana Pálffy-Buß. With her, we have gained a renowned expert in light-matter interaction who will continue our Würzburg X-ray tradition - and in a completely new quantum direction. The quantum properties of the X-ray photons themselves are in focus and we hope for innovative as well as original perspectives and research approaches," emphasizes Würzburg Cluster spokesperson Ralph Claessen, Professor of Experimental Physics at JMU Würzburg. The X-ray tradition at the Würzburg location goes back a long way, since it was at the local university that Wilhelm Conrad Röntgen discovered the radiation that was later named after him.

Adriana Pálffy-Buß has developed theoretical models for the interaction of light and matter that focus on the atomic nucleus itself instead of the electrons. To do this, she uses X-rays instead of visible laser light. This is because high-energy light quanta are needed to study the behavior and structure of atomic nuclei. While the electrons of the atomic shell are excited by optical laser light, X-ray photons with up to 150,000 times greater energy are needed to excite atomic nuclei.

At the center of the still new field of X-ray quantum optics are the effects that arise in the atomic nucleus through interaction with X-rays. The interaction of X-ray photons with atomic nuclei could open up new possibilities for material research: "Perhaps X-ray photons could be used for information transport in the future, or new applications such as X-ray lasers could emerge," says Claessen.

In 2019, Adriana Pálffy-Buß received the Röntgen Prize of the Justus Liebig University Giessen and the Hertha Sponer Prize of the German Physical Society for her theoretical models of X-ray quantum optics. Her theoretical considerations on the "strong coupling" of X-rays and atomic nuclei were experimentally confirmed.

Würzburg as the current highlight of an excellent career

"Würzburg is not only the hometown of X-rays, but also an incredibly exciting research environment for quantum physics through the Cluster of Excellence. I am very pleased to be able to benefit from this," says Adriana Pálffy-Buß, who most recently worked at the University of Erlangen-Nürnberg as part of a Heisenberg grant from the German Research Foundation. After studying physics in Bucharest, she completed her PhD at the University of Giessen in 2006. From 2011, she headed the Nuclear and Atomic Quantum Dynamics Group at the Max Planck Institute for Nuclear Physics. In 2014, she habilitated at the University of Heidelberg. Since 01.04.2022, Adriana Pálffy-Buß holds the W2 professorship for Theoretical Quantum Information and Quantum Optics at the Julius-Maximilians-Universität Würzburg. Here she strengthens the area of photonics in the Cluster of Excellence ct.qmat, in addition to the junior professorship of Sebastian Klembt created in 2020.

In 1895, Wilhelm Conrad Röntgen made a revolutionary discovery at the Physics Institute of the University of Würzburg. During experiments with electron beams in vacuum tubes, he found the "X-Strahlen", known today as X-rays. For the first time, they allowed a look "into the innermost part of the world". For his discovery, Röntgen received the first Nobel Prize in Physics in 1901.

The Cluster of Excellence ct.qmat–Complexity and Topology in Quantum Matter is a joint research collaboration by Julius-Maximilians-Universität Würzburg and Technische Universität (TU) Dresden since 2019. More than 270 scientists from 34 countries and four continents perform research on topological quantum materials that reveal surprising phenomena under extreme conditions such as ultra-low temperatures, high pressures, or strong magnetic fields. The Cluster of Excellence is funded within Excellence Strategy of the federal and state governments-as the only cluster in Germany that traverses federal state boundaries.