Great honour for the Würzburg science: The European Physical Society (EPS) has distinguished the institute where in 1895 Wilhelm Conrad Röntgen discovered the radiation later named after him. The building is now the third "Historic Site" of the EPS in Germany. 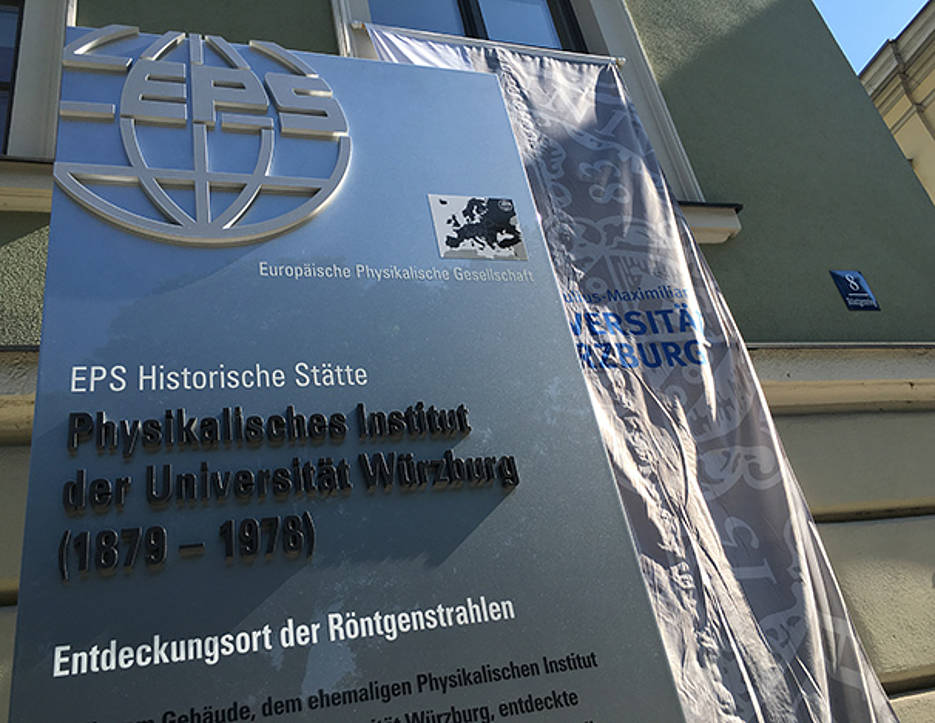 According to the EPS an "Historic Site": The former Institute of Physics. Here Wilhelm C. Röntgen discovered the x-rays. (Photo: Marco Bosch)

London, Paris, Madrid, Rome, Berlin, Munich: Würzburg is now on a par with these European metropolises. The reasons for this lies in the history of science: Each of these cities is home to a place that has been classified as an exceptional "Historic Site" by the European Physical Society (EPS).

In Würzburg, this site is the former Institute of Physics of the University of Würzburg on Röntgenring 8. A commemorative board was installed in front of the building on Röntgenring 8. Unveiled during a ceremonial act, it documents the significance of the place.

Here Professor of Physics, Wilhelm Conrad Röntgen, discovered the famous radiation, which was later named after him, in the evening of 8 November 1895. The event was certainly a historic achievement of international importance: "X-rays have become indispensable in medicine, physics, chemistry and many other sciences," says University President Alfred Forchel. For his discovery Röntgen received the first Nobel Prize in Physics in 1901.

According to Forchel, the weather during the ceremony, which saw around 200 invited guests gather at the historic site, was also worthy of a Nobel Prize. Forchel was pleased that the award has made "the connection of public and science" visible at such a central spot in the city.

In his opening address, however, the physicist did not only look back on Röntgen's ground-breaking discovery, he also emphasised its impact for the present: "Röntgen's discovery has led to the creation of new fields of business and activity also outside the scientific context and these are being developed further dynamically. Still today, the rays open up wholly unknown worlds for us.

Christophe Rossel, President of the EPS, said: "It is wonderful to present this award at one of the oldest universities in Europe and Germany." Rossel, too, underlined the significance of Röntgen's work for other disciplines, making the former institute building a truly historic site for all of science.

The President of Deutsche Physikalische Gesellschaft took a glimpse at the imminent next leap in knowledge "following in Röntgen's footsteps" and highlighted the great timing of the awarding. By this, Professor Rolf-Dieter Heuer was alluding to the start of the "European XFEL" at the German Electron Synchrotron (DESY) in Hamburg planned for 2017. "A top-notch research facility is being built here."

XFEL stands for "X-Ray Free-Electron Laser." Electrons are energized by a particle accelerator and are then made to follow a slalom course through a special array of magnets. Thus XFEL generates ultra-short flashes in the X-ray spectrum: 27,000 times a second and with a luminosity that exceeds the most powerful existing X-ray sources by a billion-fold.

According to Professor Ralph Claessen, who followed by delivering his ceremonial address, this "X-ray laser" could allow watching chemical experiments in real-time. And he believes that this could eventually lead to more Nobel Prizes being awarded based on Röntgen's discovery - as already in around 40 cases at present.

In the first part of his address, Claessen focused on Röntgen's career. He highlighted Röntgen's persistence in pursuing a scientific career despite several setbacks and the detours he had to take to arrive there. Röntgen's actions as university dean were marked by his great commitment as was his subsequent time in Munich where he contributed among others to the founding of Deutsches Museum.

Claessen also mentioned the rapid circulation of Röntgen's work under the title "Eine neue Art von Strahlung" (On A New Kind Of Rays) which was rather atypical for the time. Only just under two weeks passed from the "key picture" of his wife Anna Bertha's hand on 22 December 1895 and the unofficial mailing of his observation to selected colleagues on New Year's Day until the first publication by newspapers in London, Vienna and New York.

Claessen closed his speech by citing examples from various fields of art, technology and research that use X-rays. Among others, X-ray spectroscopy of van Gogh paintings has allowed several works of art painted over by the artist himself to be restored – the colours included. Today it is common practice in many ports to scan arriving containers for weapons and explosives; X-ray astronomy depict supernovas, forensics determines the cause of death in deaths long past and many more.

Claessen finished with a statement that all attending guests could agree to: "The former Physical Institute with Röntgen's study is truly a historic site."

The European Physical Society (EPS) founded in 1968 represents European Physics. Its aim is to promote progress in its discipline and to network the scientific physics community in Europe.

With its "Historic Sites Award" the EPS recognises places in Europe that have been important for the development and the history of physics. There have been 28 such places so far. Two of them are located in Germany, namely the Department of Physics of LMU Munich and the Berlin Institute of Physikalisch-Technische Bundesanstalt.

There are "Historic Sites" in 17 countries. The former Physical Institute is now on a par with facilities of international renown such as Niels Bohr Institute in Copenhagen, Einstein Haus in Bern and the UK National Physical Laboratory. The EPS has been awarding its "Historic Site" seal since 2012. Link to the website of the Historic Sites of the EPS: http://www.eps.org/?page=distinction_sites 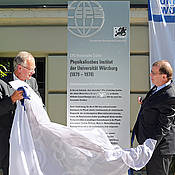