Digger wasps and their chemistry

Astonishing evolution: Because digger wasps switched prey, the chemical protective layer of their skin changed, too.

A bee (left) and a beetle undergoing fungus testing: After two days, the bee is overgrown by mycelium whereas the beetle is still almost intact. (Photos: Mareike Wurdack)

The skin of insects is usually covered by water-repellent hydrocarbons which protect them against desiccation and pathogens. This protective layer is species-specific in the majority of cases, creating a chemically unique profile which allows the members of a species to recognize each other.

But the hydrocarbon profile varies not only for reasons of communication. New findings from the Biocenter of the University of Würzburg show that the composition of the protective layer varies according to the type of prey and brood-care strategy in digger wasps. A team of Professor Thomas Schmitt reports on these findings in the journal "Evolution".

In Europe there are more than 50 species of digger wasps of the genus Philanthus and Cerceris. After they have mated, the solitary females dig long tunnels into the soil ending in a brood chamber. Then they go hunting: Some hunt bees, others prefer wasps and again others have specialised in beetles. They sting and paralyse their victims, drag them into the brood chamber and lay their eggs on the defenceless prey insects, supplying the larvae with food when they emerge.

"However, moist soil bears a great risk of the stored prey being infested and consumed by fungi after a short time, leaving the larvae to starve," Professor Schmitt explains. But digger wasps know to prevent this: They preserve quickly perishable prey such as bees and wasps.

"The digger wasps lick off their prey completely, covering them with a film of hydrocarbons in the process," the Würzburg ecologist says further. The embalming film is composed to prevent water from condensing at the surface so that spores cannot germinate there.

The embalming film has exactly the same composition as the layer covering the body of the digger wasp. This is because the hydrocarbons are produced only in highly specialised cells. From there, they are transported to the places where they are used. "Obviously, the wasps are only capable of producing exactly one hydrocarbon mix," Schmitt says.

Digger wasps that supply their larvae with paralysed bees and wasps always have a very similar hydrocarbon profile across species. This makes sense as a specific composition of the protective film is necessary to preserve the prey.

Beetles have longer resistance to fungi

In the course of evolution, digger wasp species emerged that switched to beetles as their preferred prey. This has made the chemical preservation of the victims redundant: "The surface of beetles is much harder than that of bees and wasps, and in moist soil it takes fungi much longer to infest a beetle," the professor explains.

So the beetle-hunting digger wasps do not have to embalm their prey from laying the eggs to the hatching of the larvae to protect them against fungi. They can save the effort of "embalming" and no longer need a highly effective embalming cocktail. As a result, their hydrocarbon profiles have become more diversified during evolution.

In fact, the beetle-hunting digger wasps each have much more species-specific hydrocarbon profiles. "And this is in spite of the fact that the examined species are much more closely related to each other than the other digger wasps that hunt bees and wasps."

The next research focus

Next, Schmitt's team wants to answer the question about the evolutionary main selection criterion for the diversification of the hydrocarbon profile in the beetle predators. They already have an assumption: It may be that it allows the digger wasps to defend themselves more effectively against parasites that can lay eggs in their brood chambers undetected, because they mimic the wasps' chemical profile. 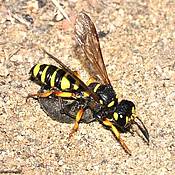 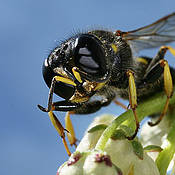