Detection of a Record-Breaking Gamma-Ray Burst

Astronomers have observed the most energetic gamma-ray burst ever recorded, which originated in a galaxy some 5 billion light-years away. The international team that detected the event included researchers from Würzburg University.

The observations that characterized the event depended on a high degree of precision. On the 14th of January 2019, the Burst Alert Telescope on board NASA’s Neil Gehrels SWIFT Observatory detected a sudden increase in luminosity in the constellation Eridanus. Just 22 seconds later, the estimated celestial coordinates had been posted on the Internet. The reaction on the Earth was only marginally less swift. Within 25 seconds of the reception of the coordinates, the two 17-m MAGIC (Major Atmospheric Gamma-ray Imaging Cherenkov) optical telescopes (each weighing around 65 tons) on the island of La Palma in the Canaries had been automatically targeted to the corresponding position.

The data gathered by the two telescopes in the aftermath of the alert has thrilled astronomers and resulted in two publications by an multinational team that includes astronomers from the Julius-Maximilian University (JMU) in Würzburg. The reports appear in the latest issue of the journal Nature. The observations revealed that the event flagged by SWIFT was a gamma-ray burst (GRB) that took place in a galaxy more than 5 billion light-years away. But what makes this event so spectacular is that it emitted photons with energies that have never before been recorded. While previous measurements of GRBs have recorded peak energies on the order of 100 gigaelectronvolts (GeV), the emission from GRB 190114C contained photons in the teraelectronvolt (TeV) range. Moreover, GRB 190114C was 100 hundred times brighter than the brightest gamma-ray source in the sky as seen from Earth – the supernova remnant Messier 1 in the Crab Nebula (which is only 3600 light-years away).

“Gamma radiation is an extremely powerful form of electromagnetic radiation, akin to X-rays but even more powerful, indeed so energetic that very few materials can effectively shield us from it. It was discovered by Paul Villard in Strasbourg in the course of an investigation of samples of radioactive material only a few years after Wilhelm Conrad Röntgen first detected X-radiation in Würzburg,” explains Professor Karl Mannheim, who holds the Chair of Astronomy at the JMU and is a co-author of both papers in Nature. Gamma radiation is emitted during certain types of nuclear decay, in matter/anti-matter annihilation and in collisions between very high-energy elementary particles. The Earth’s atmosphere is constantly bombarded by high-energy particles from outer space. Otherwise known as cosmic rays, these account for about half of the ionizing radiation that reaches the planet’s surface. The MAGIC telescopes register the light (Cherenkov radiation) that is produced when very high-energy gamma-rays collide with Earth’s atmosphere and generate what is known as an air shower.

Hypernovae: the most efficient power sources in the Universe

Cosmic rays were first detected by the Austrian physicist Victor Hess, a discovery for which he won the Nobel Prize for Physics in 1936. But only relatively recently have the astronomical sources that generate gamma radiation been localised and characterised. “Gamma-ray bursts are the product of some of the most powerful cosmic particle generators we know,” says Mannheim. GRB 190114C was most probably the product of what’s called a hypernova -- the cataclysmic explosion of a rare type of extremely massive star at the end of its evolution. Within the interior of such a star, the dense core undergoes a sudden and catastrophic gravitational collapse, and is transformed into a black hole within a matter of seconds. The gravitational energy released during this process is emitted in the form of two oppositely directed plasma jets that are oriented parallel to the rotational axis of the star.

“In hypernovae, a large fraction of the entire rest mass of the collapsed star is converted into radiation. They are the most efficient power sources in the Universe,” says Mannheim. As the analysis of the observational data for GRB 190114C has revealed, the elementary particles emitted in the plasma jets were accelerated to unimaginably high energies. The ultrahigh-energy gamma-ray photons detected during the event were on the order of a billion times more powerful than X-ray photons.

Follow-up observations carried out by telescopes that capture light in other regions of the electromagnetic spectrum complement those of the twin MAGIC instruments. In particular, they suggest that the most energetic photons can be attributed to the interaction of the plasma jets with the interstellar gas surrounding the hypernova. This is expected to produce an extremely powerful shock wave that propagates at speeds very close to the speed of light, and further accelerates the particles in the plasma jets. “Such cosmic catastrophes also occur in our own galaxy, the Milky Way. They are extremely rare, but if one were to occur in our stellar neighbourhood it would have deadly consequences for us,” says Karl Mannheim. The high-energy radiation would ionise the atmosphere, and destroy the ozone layer that shields us from ultraviolet light. In fact, it has been suggested that some of the mass extinction events recorded in Earth’s rocks might have been triggered by GRBs. However, Professor Mannheim is convinced that “evolution is capable of coping with cosmic and other sorts of catastrophes. After all, extreme phenomena such as GRB 190114C demonstrate that “nature’s powers of invention will always surpass the capacity of human imagination.”

The two 17-m MAGIC (Major Atmospheric Gamma-ray Imaging Cherenkov) telescopes are sited at an altitude of some 2200 metres, and form part of the European Northern Observatory on the Roque de los Muchachos on La Palma, one of the Canary Islands. MAGIC is an international collaborative project that involves some 160 researchers based at institutions in Germany, Spain, Italy, der Switzerland, Poland, Finland, Bulgaria, Croatia, India and Japan.

The fact that the telescope could be rapidly pointed at the source of the gamma-ray burst is a testimony to the quality of their powerful drive technology. The system’s components were manufactured by companies located in Lower Franconia and assembled by scientists and technicians in the Faculty of Physics and Astronomy at JMU and at the Max Planck Society’s Werner Heisenberg Institute for Physics. The extraordinary precision and rapid response of the MAGIC telescope system was a decisive factor in the discovery of the GRB and an essential prerequisite for the acquisition of a unique set of measurements of the early high-energy phase of a hypernova explosion.

The constellation Eridanus owes its name to an episode in Greek mythology. According to this legend, Phaeton, the son of the Sun God Helios, once gained control of his father’s chariot, but he soon found himself unable to control his steeds. The result was a wild ride along the course of the River Eridanus, which ended only when Zeus launched a lightning bolt that killed Phaeton (and also incinerated North Africa).

END_OF_DOCUMENT_TOKEN_TO_BE_REPLACED 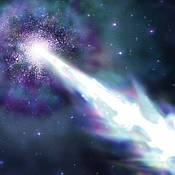 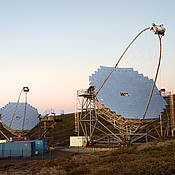